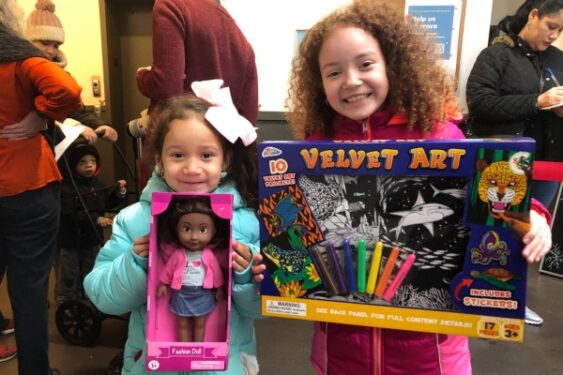 Two little girls pose with their Christmas gifts. This year, due to the pandemic, families will receive a family gift card to Target, so parents can safely shop for their little ones. (Photos courtesy of St. John's Bread and Life) 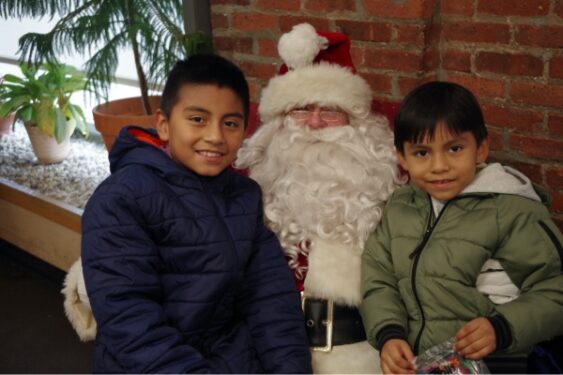 Two boys met Santa Claus, who traveled all the way to Brooklyn from the North Pole. 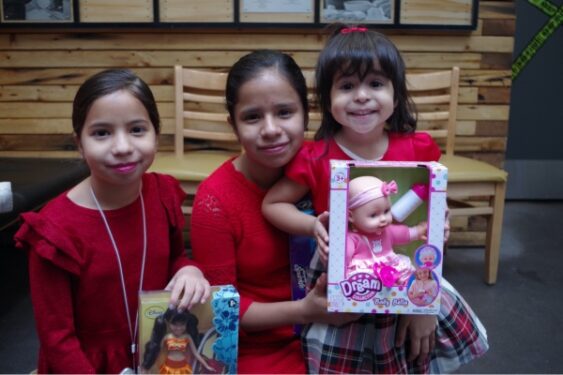 Three sisters are all smiles after receiving dolls from Santa. 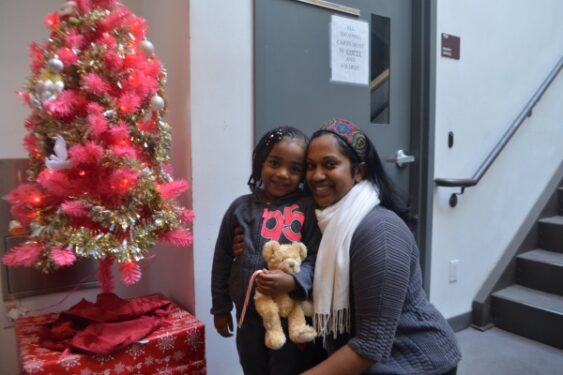 A mother and daughter are filled with holiday cheer, thanks to St. John’s Bread and Life’s Sponsor a Family program.

BEDFORD-STUYVESANT — When a family of eight walked through the doors of St. John’s Bread and Life last winter, staff members quickly embraced the “all hands on deck” spirit to help them. The family entered the New York shelter system from a different state with nothing except the vehicle they traveled in.

“They were a couple with six kids and it was their first time in New York. That was probably the largest family I ever personally assisted to date,” said Senior Case Manager Wilfredo Morales, who has been with St. John’s for the last 14 years. “With no money, food, or benefits, they came into the unknown, had no idea what was going to happen to them, and had no idea if they were going to be able to work somewhere.”

St. John’s was able to provide the family with medical benefits, toiletries, and toys through its annual Sponsor a Family program during Christmastime.

“I remember two of their little babies and they looked so happy,” Morales told The Tablet.

This act of goodwill and compassion was made possible thanks to your generosity to The Tablet’s annual Bright Christmas Campaign. Over the last nine years, the campaign has received and distributed more than $1 million, which has been used to purchase Christmas presents, food, educational materials, and other basic necessities.

Last year, St. John’s helped 1,100 families in Bedford-Stuyvesant, Bushwick, East New York, and Ridgewood, including almost 200 families from three local family shelters. The organization provided them with full holiday meals and toys for all the children. Each meal package, which serves between four and six people, came complete with a main course and all the fixings — turkey or chicken, stuffing, juices, fresh veggies, and a delicious dessert. St. John’s was also able to help homeless guests — even if they weren’t directly part of the Sponsor a Family program — by distributing socks, gloves, hats, and toiletry items, if needed.

“The total cost for last year’s program was about $66,000,” said St. John’s Bread and Life Executive Director Sister Caroline Tweedy, RSM. “The $5,000 from The Tablet’s Bright Christmas Campaign really helped us go over the top so that we could serve that large amount of people.”

Santa Claus and his elves took pictures with the children and teens at no cost, during the weekend before Christmas. Thirty staff members and handfuls of volunteers, who usually prepare for the big event several weeks in advance, also handed out candy canes and little trinkets to the kids while their parents picked up the toys and food baskets. Children between the ages of 16 and 18 received either iTunes gift cards or movie theatre tickets.

“Many parents would say, ‘I can’t take my child to see Santa. It costs too much money,’ ” Sister Caroline said. “And a lot of the families that usually come are families that are either not working, have entry-level jobs, or are making minimum wage, and are finding it difficult to pay rent or buy food. We want to provide these families with a joyful experience.”

Though the coronavirus pandemic has significantly changed how Sponsor a Family will run this year, Morales said he’s still looking forward to making these families smile after an undoubtedly tough year.

“The kids enjoy this program, and it helps lift families’ spirits for the holidays,” he said. “I love it and I always say that when I work Sponsor a Family it’s not work because it’s something fun to be a part of.”

“I know a lot of places are not holding their holiday events this year because of the pandemic. We feel that we’re an anchor in the community and people look to us for that kind of support. We want to be there for everyone — not just for our families, but for the senior citizens and homeless as well,” Sister Caroline said, adding that St. John’s mission is to be of service to those that are most vulnerable, particularly the hungry. “We’re hoping next year, when there’s a vaccine, that we can have everyone back in the building to celebrate Christmas.”

To give to the Tablet’s Bright Christmas campaign, click below: