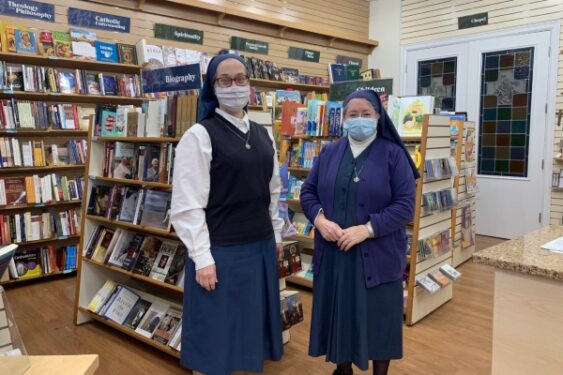 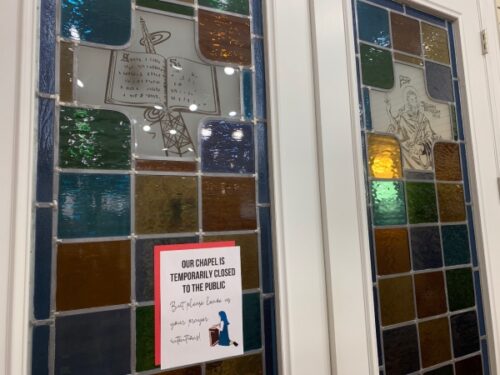 The bookstore's in-house chapel with the Blessed Sacrament is currently closed to customers. 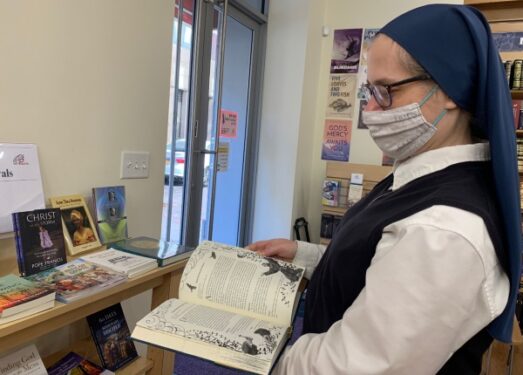 The Daughters of St. Paul recently wrote, designed, and illustrated a volume of 365 saints and blesseds. "In Caelo et in Terra: 365 Days with the Saints" is available for purchase in stores and online.

ROSE HILL — Even during a global pandemic, the Daughters of St. Paul continue to spread God’s word through a newly launched podcast series and brick-and-mortar operations. Here in New York City, one can find a group of nuns prepping for the Advent and Christmas seasons in the Pauline Books and Media storefront. Though caution is at an all-time high again with a second wave of rising cases, their devotion to the Catholic faith remains strong.

“This is an amazing way to, in a sense, plop and spread the message of the Gospel in the middle of a busy city, on the street,” said Sister Sean Mayer, who currently manages the Lower East Side store. “And where would we be without the church’s outreach to the hungry and the poor? In a sense, this is our outreach to those who are spiritually hungry and poor.”

The Manhattan location not only sells Bibles and other spiritual-related books in English and Spanish for its bilingual customer base, but also offers anything one would need to learn more about or grow in their faith — from rosary beads to pocket-sized prayer cards to illustrated books for children. However, this year, sales have greatly fluctuated, and inventory has been difficult to manage.

When the store was forcibly closed on St. Patrick’s Day, the four sisters had to operate out of their Staten Island convent, with limited stock, for mail orders. Sister Sean noted that they called their frequent customers and benefactors, keeping in touch to see how everyone was doing as the pandemic began to unfold. Then, two weeks after Easter, Sister Sean commuted from one island to the other, taking phone calls and fulfilling new orders.

“Oh my goodness, we gathered so many prayer intentions as we all lived through negotiating our own fears at that time,” she told The Tablet in mid-November. “March and April were nuts in New York City.”

As the months continued, the store improved its website, began offering curbside service, and later reopened its doors to in-person customers by Labor Day. The combined First Holy Communion and Confirmation season, which was non-existent in the spring, slowly resurfaced in the fall as parishes began celebrating those sacraments of initiation again. As a result, according to Sister Sean, more people called the sisters and hesitantly asked, “Do you have communion cards?”

Weekly and Sunday missiles have been popular pandemic purchases by customers, according to Sister Sean, since attending Mass in person may not be possible. The store has also seen an uptick in customers who are stopping by from the nearby hospitals, such as Tisch Hospital, NYC Health + Hospitals/Bellevue, and VA New York Harbor Healthcare System’s Manhattan campus.

“Maybe they’ve had a bad diagnosis, or maybe something’s happened, and they need a God moment,” she continued. “We are that God moment for them, and it’s part of their journey of connecting or reconnecting to the church, which is beautiful.”

As Pauline Books and Media began to see business slightly pick up in the fall, across town, The Strand Bookstore posted a social media outcry for support and help. Strand owner Nancy Bass-Wyden said revenue went down 70%, compared to 2019 figures, due to a decline in foot traffic, tourism, and in-store events.

“I’m very grateful that people come in or call and buy things in physical bookstores, rather than going to various big box, online options,” Sister Sean said, adding that she believes there’s a real reading culture in Manhattan. “I admit, they’re very convenient, but they’re brutal for us and other bookstores.”

Due to the spotlight on Strand, Pauline Books and Media received more calls — which resulted in a peak for sales during October. However, sales decreased the following month, and overall sales “are seriously way down from this time last year,” according to Sister Sean.

Some international clientele, which usually would’ve purchased large amounts of English-language material during their trips to New York, haven’t occurred due to limited international travel and lockdowns. Sister Sean further explained that people from the Caribbean islands or Europe would usually buy a mix of catecheses for their families, liturgical books, or the latest publications regarding spirituality or theology.

Additionally, this Christmas season has been challenging to predict due to the possible second wave of COVID-19 that New York City could face this holiday season.

“You need to have the Christmas cards, nativity sets, and other things, but it’s a fairly narrow window of time to sell the stock,” she said, noting that she’s purchased half of her usual amount of cards. “And if you don’t sell it, you’re stuck with it for the rest of the year. That’s a lot to carry for nine months until you get to pull out that Christmas stock again.”