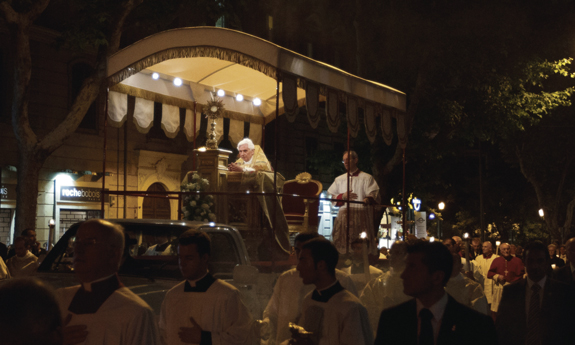 Pope Benedict XVI kneels in prayer in front of the Blessed Sacrament during the Corpus Christi procession in Rome.  At Corpus Christi Mass, the Pope said a misunderstanding of the Second Vatican Council has led some Catholics to think that Eucharistic adoration and Corpus Christi processions are pietistic practices that pale in importance to the celebration of Mass outside Rome’s Basilica of St. John Lateran.  “A unilateral interpretation of the Second Vatican Council has penalized this dimension” of Catholic faith, which is to recognize Jesus truly present in the Eucharist and worthy of adoration, the pope said June 7 during a Mass marking the feast of the Body and Blood of Christ.  The Pope said that if Christ is seen as present in the Eucharist only during Mass, “this imbalance has repercussions on the spiritual life of the faithful,” who need to be aware of “the constant presence of Jesus among us and with us.”