Of the 12 men celebrating their 50th anniversaries as priests this year, eight were ordained to the priesthood on May 28, 1966 at St. James Pro-Cathedral, Downtown Brooklyn, by Archbishop Bryan J. McEntegart.

The details of the other jubilarians’ ordinations are included in their biographies. Here are brief biographies of the golden jubilarians:

Father John Amann, pastor emeritus of Holy Family parish, Canarsie, will celebrate a Mass of thanksgiving on Sunday, May 22, at 12:45 p.m.

He continues to reside and serve at Holy Family.

Father Joseph R. D. Bruno was born in Terrier Rouge, Haiti. He completed his primary and secondary studies from 1944 to 1959 at the elementary school administered by the Sisters of Oblates of Mary in Terrier Rouge and College Notre Dame in Cap-Haitien.

In 1959, he entered the Major Seminary of Notre Dame in Port-au-Prince.

He was ordained May 19, 1966 at the Cathedral Basilica of Notre Dame de l’Assumption, Cap-Haitien by Bishop. A. F. Cousineau.

He served as a parochial vicar in numerous parishes in the north of Haiti, 1966-73, and as a pastor, 1973-2007. He retired to the U.S. in 2009, where he has served at St. Therese of Lisieux, East Flatbush, and for the past three years at Sacred Heart, Cambria Heights.

Father Jesus Cuadros, pastor of Holy Family-St. Thomas Aquinas, Park Slope, since 2001, will celebrate a Mass of thanksgiving at the church.

Born in Bogota, Colombia, he attended the Instituto Latino Americano, Medellin, Colombia, and Universidad Javeriana, Bogota. He was ordained in Bogota on Nov. 20, 1966.

He was incardinated into the Brooklyn Diocese in 1985.

Father Robert Czok, who is retired and living in Rockaway Beach, will celebrate a Mass of thanksgiving at St. Anthony-St. Alphonsus Church, Greenpoint, on Sunday, May 22, at 12:30 p.m. A reception will follow in the parish cafeteria.

He also will celebrate a Mass of thanksgiving on Sunday, May 29, at 11 a.m. at St. Rose of Lima Church, Rockaway Beach.

Drafted into the U.S. Army, he served as a chaplain’s assistant at Fort Benning, Ga. He then studied for the priesthood at SS. Cyril and Methodius Seminary, Orchard Lake, Mich.

Since achieving senior priest status, he has been living at St. Rose of Lima rectory, Rockaway Beach.

Father Czok studied Spanish in Puerto Rico and Colombia and served at the diocesan mission in La Vega, Dominican Republic, 1998-99.

Father John J. Garkowski, a senior priest who lives at Our Lady of Perpetual Help rectory, South Ozone Park, will celebrate a Mass of thanksgiving at the parish on Sunday, May 29 at noon. A reception will follow in the school hall.

He did graduate studies at Columbia University, Manhattan, and Loyola in Baltimore.

Father John J. Gildea, who is a parochial vicar at St. Bartholomew, Elmhurst, since 2011, will celebrate a Mass of thanksgiving at the church on Sunday, May 29, at 10 a.m.

Father John Harrington, a senior priest who resides at Our Lady of Mount Carmel rectory, Astoria, will celebrate a Mass of thanksgiving at the church on Sunday, May 22, at 2:30 p.m. A dinner will be held on the previous afternoon at Riccardo’s-by-the-Bridge, Long Island City, at 1 p.m.

In 1988, he attended the Jesuit School of Theology at Berkeley, Calif., and resided at St. Joseph the Workman parish there. The following year, he was assigned to St. Michael’s, Flushing.

From 1994 to 1997, he served at the diocesan mission in Marion, Piedra Blanca, Dominican Republic.

Father Harrington has long been active in the Hispanic apostolates. He also did graduate studies at Catholic University, Ponce, Puerto Rico, and at St. John’s University, Jamaica.

Msgr. Thomas J. Healy, who resides at St. Michael’s rectory, Sunset Park, will celebrate a Mass of thanksgiving at the church on Sunday, May 22, at noon.

He later served as an administrative assistant at Catholic Medical Center, Jamaica, and as an assistant at St. John the Baptist, Orocovia, Puerto Rico, 1977-78.

In 1984, he was appointed as pastor of Our Lady of Lourdes, Bushwick, where he served until 1991. He became the administrator of Our Lady of Sorrows Church, Corona, in 1991 and was named pastor there the following year. He retired last year.

He also served as chaplain at Bishop Kearney H.S. and Bishop Loughlin M.H.S., both Brooklyn.

Father John P. Maloney, a senior priest who lives in Florida, celebrated with family and friends at a class Mass of thanksgiving in Douglaston on Sunday, May 15.

He was the administrator of St. Virgilius from 2006 until 2009 when he retired.

Father Robert P. Morales, pastor emeritus of Our Lady of the Cenacle parish, Richmond Hill, will celebrate a Mass of thanksgiving at the church on Sunday, June 26 at 11:30 a.m.

Born in Manhattan, he attended Cathedral College in Brooklyn; the Immaculate Conception Seminary, Huntington, L.I.; and the American College at Louvain, Belgium.

In 1994, he was named administrator and in 2000 pastor of St. Mary’s, Maujer St., Williamsburg.
In 2004, he became pastor of Our Lady of the Cenacle, where he served until last year.

Msgr. Robert Pawson, retired pastor of Our Lady of Lourdes parish, Queens Village, celebrated a Mass of thanksgiving at the church on Saturday, April 2.

He was ordained March 26, 1966 at St. Paul Apostle Church, Innsbruck, by Bishop Rusch. 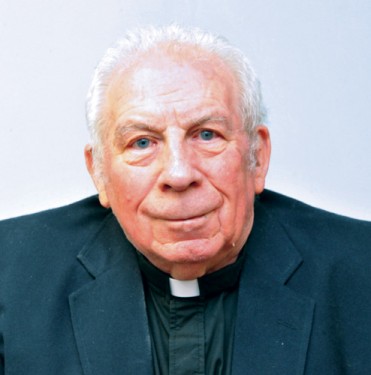 Father Romano A. Zanon, who has lived since 2014 at Bishop Mugavero Residence for retired priests, Douglaston, is a native of Italy who grew up in Williamsburg.

He attended Aviation H.S., Manhattan, and was drafted into the U.S. Army in 1945. He served until 1954, seeing action in post-WW II Japan as well in the Korean War. He was decorated by both the U.S. and the Korean governments.

He attended the School of Modern Photography, Manhattan, and worked as a dye transfer agent for five years. Then he worked as a lithograph artist at Brett Lithography before entering Mount St. Mary’s Seminary, Emmitsburg.

In 1980, he was appointed as administrator of St. Benedict the Moor, Jamaica, and two years later he became pastor.

In 1993, he was appointed as chaplain at Mount St. Mary’s Cemetery, Flushing, while residing at Sacred Heart, East Glendale, where he assisted with parish ministry.

4 thoughts on “Golden Jubilarians: 12 Priests Have Been Ordained 50 Years”