MANHATTAN — President Joe Biden won 50 percent of the Catholic vote in 2020, which might lead one to conclude that half of voting Catholics approve of his performance during his administration’s first 100 days in office.

Biden, the second Catholic president in the U.S., promoted his actions with a speech in the House Chamber on April 28, the eve of the 100th day, Thursday, April 29.

An examination of the Federal Register shows Biden’s 42 executive orders to date are more than any other president; the closest is Franklin D. Roosevelt in 1933. By contrast, he has signed only 11 bills, which is among the lowest of all presidents in their first 100 days. The data shows that George W. Bush signed the fewest, seven, and FDR the most, 76.

But one of the bills Biden has inked is the $1.9 trillion COVID-relief package, and he has pledged to spend $4 trillion on infrastructure improvements. He has also promised a full withdrawal of U.S. troops from Afghanistan by Sept. 11.

“After 100 days of rescue and renewal, America is ready for takeoff, in my view,” Biden said in his speech. “We’re working again, dreaming again, discovering again, and leading the world again.

“We have shown each other and the world that there’s no quit in America — none.”

However, the assessment of the 46th president’s first 100 days by the Catholic electorate has been mixed.

Here is a rundown of critical issues of concern for Catholics:

Biden made good on campaign promises to deliver relief to help lift the country from economic stagnation wrought by the COVID-19 pandemic. 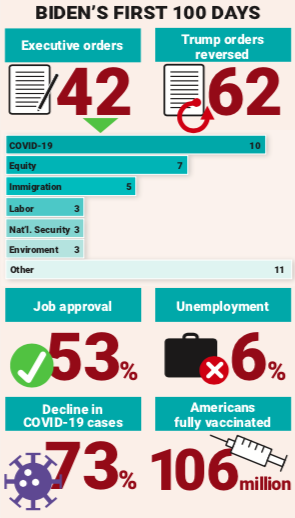 Brian Browne, a political science professor at St. John’s University said passage of that bill was great timing for the first-term president, who delivered a sort-of State-of-the-Union speech on April 28.

“Unlike most traditional State-of-the-Union addresses,” Browne said, “Biden was giving the speech when he already had a major piece of legislation accomplished. He had something to hold up and say, ‘I did this.’ So he kind of flipped the narrative a little bit.

Browne added that the COVID vaccine rollout has generally been good, adding that it was “spotty at first,” but that people are now “seeing a light at the end of the tunnel.”

Biden originally set a goal of 100 million vaccinations within his first 100 days, but that was doubled by the time he delivered the April 28 speech.

Tiballi did credit Trump for ramping up production under “Operation Warp Speed,” which ensured that stockpiles of vaccine would be available across the U.S. when Biden took office.

“If you were to ask me if he (Biden) has done anything much differently (than Trump), I would have to say no,” Tiballi said.

Biden quickly checked the boxes on his environmental agenda. He immediately rejoined the Paris Climate Accord and blocked construction of the Keystone Oil Pipeline. The new president has also pledged to order regulations aimed at setting in motion a 50 percent cut in carbon emissions by 2030.

The U.S. Conference of Catholic Bishops praised those moves, calling them an “ambitious and welcome national goal” that aligns with Pope Francis’s environmental views.

“Consistent with the Holy Father’s call for integral ecology, the movement towards a net-zero emission world must also emphasize just transition so that working families who rely on the energy sector are not left behind,” according to a statement from the USCCB.

Catholic Bishops have been critical of the new administration’s handling of immigration during the first 100 days. But the bishops raised their assessment on May 4, a day after Biden announced he was revising the nation’s annual refugee admissions cap to 62,500 for this fiscal year.

On May 3, Biden said he would erase “the historically low number set by the previous administration of 15,000.” He said the Trump administration cap “did not reflect America’s values as a nation that welcomes and supports refugees.”

Bishop Mario E. Dorsonville, auxiliary bishop of Washington and chairman of USCCB’s Committee on Migration, said the move was a step in the right direction.

“We were pleased with the administration’s previous decision to reinstate the regional allocation framework,” Auxiliary Bishop Dorsonville said in a statement. “But this increase was a crucial step toward rebuilding the crippled Refugee Admissions Program.

“We view this number as a stepping stone toward the administration’s stated goal of 125,000 admissions, a figure more consistent with our values and capabilities as a nation.”

Biden added, however, that “the sad truth is that we will not achieve 62,500 admissions this year. We are working quickly to undo the damage of the last four years. It will take some time, but that work is already underway.”

Biden campaigned on a platform to reverse Trump-era restrictions on non-citizens entering the country. But a subsequent post-election rush of immigrants to the U.S.-Mexico border was unexpected and overwhelming for port-of-entry officials.

“He sent the positive signal that we would be more humane,” said Bishop Nicholas DiMarzio of the Diocese of Brooklyn. “Well, since then, they read the tea leaves and here they are.”

As expected, Biden did not stray from his support for the right to abortion. Catholic bishops noticed the president’s stance, and voiced disapproval, although not all clergy agree that he should be denied the Eucharist because of his abortion policies.

For example, the National Institutes of Health announced in late April that it was reversing limits on human fetal tissue research that were put in place by the Trump administration.

“The bodies of children killed by abortion deserve the same respect as that of any other person,” Archbishop Naumann responded. “It is unethical to promote and subsidize research that can lead to legitimizing the violence of abortion. Researchers have demonstrated that we can do effective scientific research and develop efficacious clinical treatments without harvesting tissue from aborted babies.”

A few weeks earlier, the U.S. Department of Health and Human Services published a proposed reversal of “The Protect Life Rule,” — another measure created by Trump — one that would clearly separate abortion from family planning in the federal Title X family planning program.

Archbishop Naumann said such a policy change would “become an indirect funding avenue for abortion providers.”

“In spite of explicit prohibitions in federal law and clear congressional intent that abortion may not be a part of this program, it has repeatedly been co-opted by abortion supporters as a funding stream for organizations, programs, and facilities that directly promote and provide abortions,” Naumann said in a statement.

Biden pledged to sign the proposed Equality Act during his 100 days, but the deadline passed with the bill stalled in the Senate.

Proponents say this act would bring long-overdue protections against discrimination to LGBTQ+ communities by dramatically expand the Civil Rights Act of 1964. It would ban discrimination based on sexual orientation or gender identity in numerous settings, such as protections based on sex in public accommodations such as retail stores, banks, transportation services, and health care services, to name a few.

During his April 28 speech, Biden urged Congress to finally pass the bill, while LGBTQ+ advocates lamented the delay.

Catholic bishops, meanwhile, say the Equality Act is fraught with threats to religious freedom, a point made by Cardinal Timothy Dolan, Archdiocese of New York.

Cardinal Dolan chairs the USCCB’s Committee for Religious Liberty. In a recent op-ed article, he asserted that the Equality Act “goes far beyond its noble desire to protect vulnerable people.”

He wrote that Catholics extend care and charity to all people without regard to sexual orientation. But the Cardinal noted that the Equality Act unfairly demands that Catholics ignore Church teachings regarding sex, gender, and human biology.

“It burdens consciences and severely curtails the rights of religious people to be free to practice their faith,” Cardinal Dolan wrote.

He also noted that the act “also sneaks in an abortion mandate by defining ‘sex’ to include ‘pregnancy, childbirth, or a related medical condition’ — a phrase that courts have interpreted to include abortion.”

“It seems that whether the issue is abortion, gender ideology, or marriage redefinition, the activists are not content to simply do what they want. With the Equality Act, they are saying, ‘no matter what you believe, you are going to support these things.’”

Browne and Bishop DiMarzio both noted that Biden is under a tight schedule to get as much done as possible before the 2022 mid-term election. Browne cautioned that the Democrats currently have razor-thin margins of representation in both houses of Congress.

Bishop DiMarzio noted, however, that history has shown that meaningful work can be done via compromise.

“It is a very uneven 100 days,” he said. “Certain ideas are good. But politics is the art of the possible, and it’s accomplished by compromise. Unfortunately, there has been no healing of the rift between the two parties.”