Caitlin Mullen spent her Friday night convincing her friends to wake up early the next day. Even though it was the Saturday after junior prom, Xaverian H.S., Bay Ridge, was having an event that she said they just could not miss.

Now a junior at Xaverian, Mullen said there was a time in her childhood when her parents never thought she would have a normal life, let alone live to wake up early on a Saturday morning to go to a school fundraiser with friends.

That’s because her family discovered that she had eye cancer when she was in the first grade. “I had go through about two years of chemotherapy at Sloan Kettering. I didn’t really understand what was happening at the time,” Mullen said. “I was young.”

Young, but not alone. Another one of Mullen’s schoolmates, ninth-grader Thomas Guardavaccaro, has a similar story. He learned that he had cancer at the age of seven.

And Gary Cassioiano, a recent graduate of the school, was diagnosed with cancer last year.

“It was very traumatizing. It was over the summer, when I had just graduated. This just came up out of nowhere, we didn’t know how it happened, Cassioiano explained.  “It just happened.”

Childhood cancer may seem daunting, but it isn’t rare. According to the National Cancer Institute, it is estimated that 15,590 children up to the age of 19 will be diagnosed with cancer this year. It is the leading cause of death by disease past infancy among children in the United States.

Despite those grim statistics, strength prevailed on May 18 when students arrived at their school to walk in Xaverian’s first annual “Clippers Chasing Cures” cancer awareness walk, inspired by kids like them. Cancer-free and dressed in gold T-shirts, they stood alongside family and friends in blue who supported them through treatment after treatment.

The event was organized by Thomas Burns, a guidance counselor at the school. After hearing some of the survivor’s stories, he and other members of the school’s staff approached the principal, Deacon Kevin McCormack, asking if they could do something for the teenagers.

The students agree that they owe their lives to Memorial Sloan Kettering Cancer Center. So it seemed natural that the schoolwide walk would donate the proceeds to Sloan Kettering’s children’s fund. 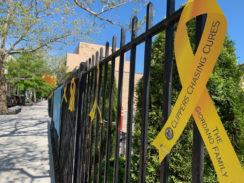 Burns wanted to use the walk as a way to not only reach out to these students, but to let them know that their whole school has always been behind them in their remission journey.

“Xaverian’s been in my blood since 1979 when I walked into this building as a student, and I’ve been there ever since. We wanted to send a message to our students about how important it was to give back,” Burns explained.

Prior to the walk, the survivors spoke publicly to the students in an assembly, hoping to shatter misconceptions behind being diagnosed with cancer at a young age.

“When you’re younger, you really don’t get the big picture of what you’re going through until a litter later when you realize, ‘Wow, I went through that, and I now I’m here.’ It’s amazing to think that I couldn’t have come back from that,” Guardavaccaro said.

“I knew that I was different from all the other kids, so when I was able to start going back to school regularly, was able to play my sports, it was like the best time of my life really,” Mullen recalled.

When she heard about the plans for Xaverian’s cancer walk, she became energized by the idea and quickly told her family and friends, even managing to get her friends there post-prom.

“When I heard about this event at my school, I was actually so excited. I saw all the banners in the cafeteria, I texted all my friends and family right away and was like, ‘You have to come,’” she said.

“And then I realized it was the day after prom. I texted my friends like, ‘It doesn’t matter, you’re still coming,’ I was I was so proud of my school.”

And they showed up in droves, 300 strong, a sea of blue and gold T-shirts.

Walking from the school to Narrows Botanical Garden nearby, the group made its way down the Shore Road Promenade Scenic Lookout while enjoying views of the sunny Manhattan skyline.

Despite the celebration, the reality remains that the students honored still have to schedule yearly doctor visits to confirm that they remain in remission.

By the end of the day, the walk had raised over $22,000 for Memorial Sloan Kettering Cancer Center’s Children’s Joy Fund. The fund allows children undergoing treatment for childhood cancer to still participate in everyday activities like going to school, walking with friends and more importantly, blowing out birthday candles every year.