If Newton’s third law of motion could be applicable to the current status quo of the young Church, then for the misguided, misinformed and spiritually misunderstood teenager out there, an equal and opposite force must be headed for a crash course with that person in the same direction, right? Would that teenager then be equipped with proper guidance, information and an understanding of one’s spiritual and moral compass?

One would hope so. In a perfect world, the foundation begins in the family household. But in our imperfect world, such a socio-economic complex is not the absolute norm. Yet in such brokenness, exists a Master Planner, one whose mastery of the sea is far from magic, but who is Jesus, the Master of all the forces, His power and authority the greatest of them all. He accompanies us, His Church, subduing the forces that threaten to surround it.

I tagged along during the week-long Faith and Service: Vincentian Leadership Institute for High School students. I spent time with the teenagers who were more than willing to answer the call to be such an unyielding force for their faith. While their home parishes varied, since they were from both the Rockville Centre and Brooklyn dioceses, nothing unified them more than embodying the Gospel values, acted upon through Vincentian characteristics.

Vincentians, whose patron saint is St. Vincent de Paul, are ‘united in an international society of charity by their spirit of poverty, humility and sharing, which is nourished by prayer and reflection. They witness God’s love by embracing all works of charity and justice, seeing no distinction in those they serve because for Vincentians, they see the face of Christ in everyone.

The seven young members from St. John the Baptist Church in Bedford-Stuyvesant could have been mistaken for family members: a diverse assembly of faces but united with laughter that only needed one glance from each other, words optional. These teens grew up together and as a unit decided to put their faith into action as disciples of the young Church.

It wasn’t that they were cookie-cutter students who didn’t understand their peers or the youth culture, but rather they were unique that in the midst of life’s adversities, their hearts were more than willing to grasp the lessons learned by the world surrounding them. Through such lessons, I can imagine the Gospel seeds taking root in their minds and when the time is right, their actions of compassion will blossom into a world that could use it and so much more.

If Pope Francis calls us to ‘smell like the sheep’ we minister and evangelize, then these students were willing to dive right into the fabrics of uncomfortability, injustice and poverty.

Isn’t that the way Jesus would have it, to make bold choices despite doubts and criticism?

The challenge then, whether we choose to accept it or not, because God gave us the free will to choose, is to look to members of our young Church and to even look within ourselves and see the need to foster values of charity, truth and justice.

We may never know how God will use His humble instruments, but what if all we needed to do was take a chance on the future of our Church by embracing the Church growing right in front of our eyes?

Editor’s Note: See the centerfold for the full story.

For more information on the Faith and Service program, contact Joann Heaney-Hunter at heaneyhj@stjohns.edu, 718-990-5428 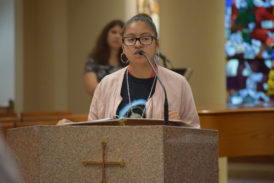 “Honestly people suffer in different time eras. Modern-day people I’ll say, take advantage to what they have and they don’t notice or see what people had to go through just to come here.” – Dahlia Romero, rising junior, parishioner at St. John the Baptist, Bedford-Stuyvesant 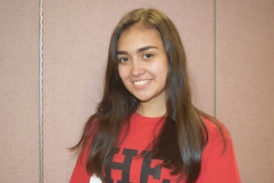 “Every human being has inalienable rights to be treated with dignity. Everyone is human, no matter our race, religion or financial status.” – Keysha Tejeda, rising senior, parishioner at St. John the Baptist, Bedford-Stuyvesant 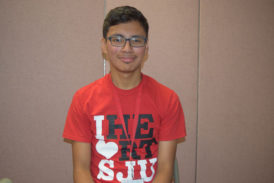 “A sacrifice I’ve made that was worth it was coming to St. John’s Faith and Service as it allowed me to do a lot of selfless service for other people.” – Emmanuel Ruiz, rising sophomore, parishioner at St. John the Baptist, Bedford Stuyvesant 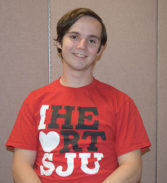 “This week really got me to help people, a lot of the members of the Brooklyn diocese. To actually be exposed to the Vincentian charism, to actually learn more about faith through service, and learn more about St. Vincent De Paul and seeing God in the poor.” ­– Timothy Sullivan, Cathedral Prep, Class of 2016

“In our area of Bedford – Stuyvesant, it is a challenge getting young people involved in the Church to begin with. Keeping them interested and getting them invested are further hurdles that have to be overcome. These particular young people have been with us for several years now and I knew this program would bring together and help them to make sense of the many things they have learned throughout the years.

The process of picking the student-leaders was quite easy. They have been involved and active at St. John’s for years. Some are a part of the youth ministry, others are altar servers and all of them volunteer in one way or another. Each young person was asked if they would be interested in participating in the Vincentian Leadership Program. These young people are collaborative, creative, outspoken, compassionate and open. These are qualities I felt would be important to build on this week-long program.

Overall, our youth are supported as leaders. They are allowed opportunities to take the lead in prayer nights, they have led the community on Good Friday as we pray the Stations of the Cross in the neighborhood, and we have a young lady who gave a testimony on immigration at a huge community meeting. Given the chance, young people are usually willing to share their great God-given gifts.

In our day and age, convenience and self-satisfaction seem to be on the top of people’s list. Pope Francis said it best, “We live in a world that everything is seen as disposable.” It is easy to turn away from those who are marginalized and suffering (many times through no fault of their own). Vincentian values make us want to look at the poorest in the face. They make us want to touch those that others refuse to get close to. These values help to humanize our youth and remind them that all of us are children of God. Fostering Vincentian values in our youth is not only a positive force for our society today but it will move on with them into the future.” – Jeannie Ortiz, Director of Religious Education, St.John the Baptist, Bedford-Stuyvesant