NEW YORK — In a discreet office inside New York’s FBI headquarters, Michael Osborn, the Assistant Special Agent in Charge of Violent Crimes and Crimes Against Children, is tackling a growing crisis in America — online child sexual exploitation. The internet has become the go-to place for predators who want to target vulnerable young children. And it’s not just for profit.

Osborn, who’s spent years putting pedophiles behind bars, says predatory behavior online is different than all other forms of human trafficking because “individuals are using the internet to target and exploit kids for child pornography or to meet for sex, as compared to human trafficking where you have individuals that are trading or selling a commodity, which is the girl or the woman.”

That distinction is all the more abhorrent because the victims can be so young, and the online abuse can last a lifetime.

One problem is “sextortion,” a form of blackmail in which predators groom their victims, sometimes for months, and then coerce them into sharing explicit photos and videos of themselves. Once a predator gains access to the compromising material, he or she uses it to extort children for sexual favors, threatening to release the imagery online if the victims don’t comply.

“They are about control, so they use force and violence all the time,” Osborn said.

Traffickers eventually sell the illegal material to pedophiles, who then share it in dark corners of the web over and over again, making the exploitation never-ending, even if the victim is ultimately rescued.

Experts agree that as technology advances and social media platforms mushroom, it’s getting easier for perpetrators to hide their crimes and money — a disturbing trend that has Queens Assistant District Attorney Jessica Melton concerned.

“Every trafficker that we have seen has more than one victim; they are doing this as a business, to support themselves,” Melton said. It’s a business that’s booming because “social media is being used to recruit” and may even be part of the reason “why the victims are getting younger and younger,” Melton said.

Melton also believes that online exploitation is proliferating because loved ones are often in the dark about what’s going on.

“Traffickers can be targeting victims without people in their lives even knowing they are being recruited … through social media, Instagram, Facebook and Snapchat,” she said.

Victims are also targeted on sites like the now-defunct Backpage.com, which was a huge online marketplace for sex ads, including child prostitution. It was shut down by the Justice Department last year in a 93-count federal indictment. Seven people, including the site’s founders, were charged with facilitating prostitution, conspiracy and money laundering.

“Staffers had a whole kind of script on how to coach pimps and traffickers,” said Rachel Lloyd — founder of the survivor advocacy group, GEMS (Girls Educational & Mentoring Services). Lloyd has lived through the horrors of being trafficked and knows just how hard it is to stay ahead of trafficking sites like Backpage. 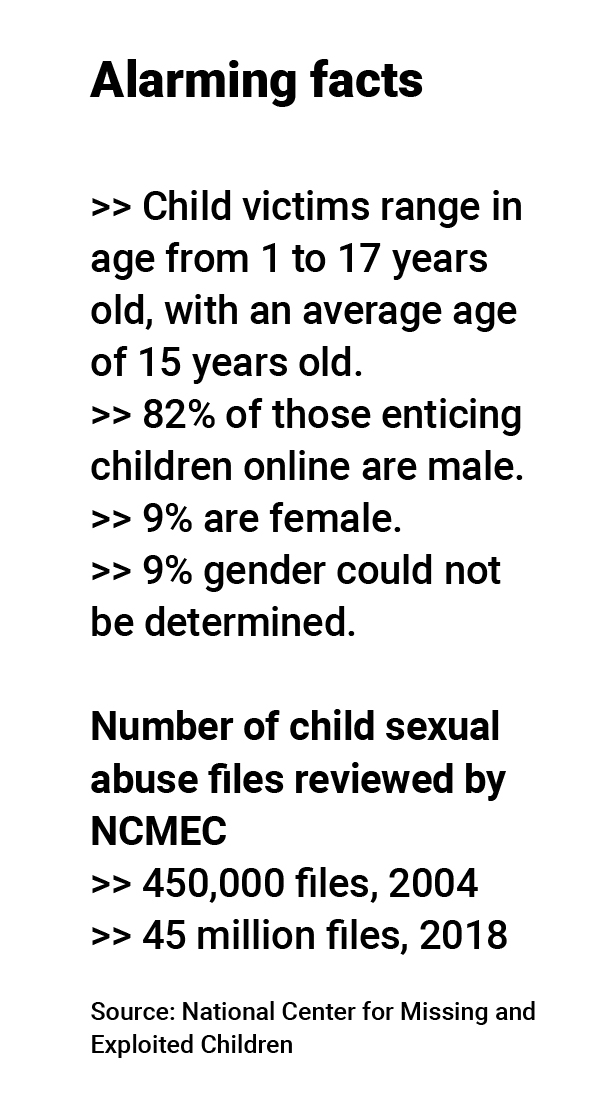 “They were coaching folks on how to make their ads more acceptable and avoid detection … developing algorithms to suss out certain keywords and ads,” Lloyd said.

By the time authorities catch up with the traffickers, the predators have already adapted, changing their language and getting smarter about hiding their crimes. Now that Backpage is gone, other sites have popped up in its place, proof that more needs to be done to protect society’s most vulnerable from being targeted.

The FBI’s Osborn said vigilance is necessary, because “it’s always about the vulnerability.”

Identifying, investigating and prosecuting internet predators is difficult because the abuse happens across multiple jurisdictions with victims and offenders often in different countries, many of them lacking the legislation or the capability to prosecute such complex crimes. But law enforcement agencies and survivor advocates agree that there are solutions that can help put an end to the evils of online exploitation, beginning with the demand for accountability from social media providers and cellphone companies.

“There is a responsibility to figure out how to combat it and how to fix it,” Lloyd said, because it’s an unintended consequence of networks they helped create.

Experts also stress the importance of awareness and education and an understanding of how online predators operate. Children must recognize why they should never send compromising images over social media. Once those images are sent, there’s no way to get them back.

“First, prosecuting the traffickers is a must,” she said. Then, “we have to support the victims, give them alternatives. These are women and children.”

If you suspect someone to be a victim of human trafficking or may have identified a potential trafficker, use these resources to anonymously report your
findings:

Braatz is the special projects executive producer for Currents News.
Tamara Laine contributed to this report.