MANHATTAN — Just a couple weeks after the first day of school, social media outlets and tv screens across the country showcased crowds of young faces on a Friday morning in September. Except these students weren’t necessarily discussing curriculum or school subject matter. Instead, they were organizing in groups to partake in the 2019 Climate Strike, Sept. 20.

New York Mayor Bill de Blasio publicly announced that students with parent or guardian consent were excused from classes that Friday in order to participate in the Manhattan rally.

Months leading up to the event when thousands of Catholics and non-Catholics alike across the globe urged government and business leaders to take action when it comes to combating climate change, religious sisters from the Sisters of St. Joseph in Brentwood, N.Y.  mobilized their sponsored schools to take action. 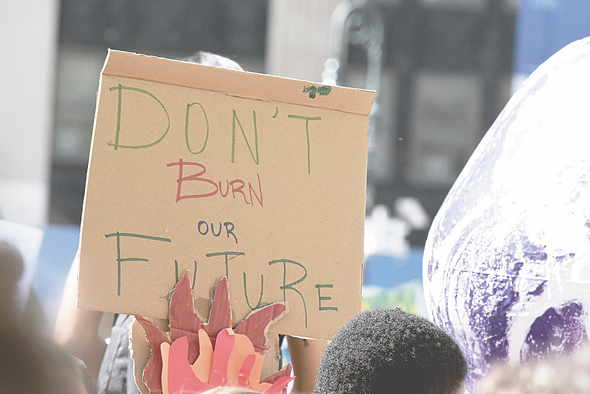 “We really want to connect their action today with their faith life,” said Sister Susan Wilcox, C.S.J. “The back of our shirt has a quote from Pope Francis’ ‘Laudato Si’ and we really want to make that connection. The global Catholic climate movement and the ‘Laudato Si’ generation have taken a lot of leadership globally to help youth make that connection between their faith life and their action on the climate.”

Together with members from St. Joseph Workers, they all wore customized light-blue shirts that united them in uniform. That’s because as they gathered in Foley Square, they became a small sliver in a growing crowd filled with young activists decked with handmade cardboard posters and colorful flyers.

“It’s power in numbers,” said Jeuel Calhoun, a senior at St. Joseph H.S., “because at the end of the day, we have to be heard.”

Standing with the young women as they maneuvered  the crowds were Sister Helen Kearney C.S.J., president of the Sisters of St. Joseph, and Sister Mary Doyle, C.S.J. Even though they were decades older than the students, they still marched with them to Battery Park City.

“The sisters are really accepting of everyone,” said Anureet Kaur, a senior at The Mary Louis Academy. “I’m not Catholic myself, but I still go to this school. They’re accepting and supportive.”