If the patron saint of youth, St. John Bosco, could have stepped into Carnesecca Arena for Steubenville NYC, he would contemplate just how the third-largest indoor sports arena in New York City could have transformed into a snippet of heaven. That’s because he would have witnessed more than a thousand teens boldly living their faith out loud in full communion with the Catholic Church during a three-day youth conference hosted by the Diocese of Brooklyn in partnership with Life Teen.

Whether it was the sea of bright neon-green lights cascading through the stage onto the teens decked out in vibrant t-shirts that represented their home parishes or the hundreds of hands raised into the sky while singing praise and worship songs, teens throughout the tri-state area were invited to surrender all their worries in order to be closer to Christ, July 21-23.

It was a weekend at St. John’s University in Jamaica that balanced faith and fun, from silent moments of prayer and deep reflection after talks from keynote speakers to waiting behind smiling nuns in a food truck line destined for strawberry-flavored shaved ice.

But most importantly, Steubenville NYC brought the universal Catholic Church to life by allowing hundreds of teens to think beyond their parish walls. It made room for the young church to witness hundreds of their peers experiencing God’s loving presence during Eucharistic Adoration or the sacrament of Reconciliation or through the highest form of prayer with Mass. On Sunday’s closing Mass, Bishop Nicholas DiMarzio concelebrated the Liturgy of the Eucharist with Auxiliary Bishop James Massa and the diocese’s vocations director, Father Sean Suckiel. He addressed the huge crowd, which also included more than 60 priests from beyond the borough’s borders. 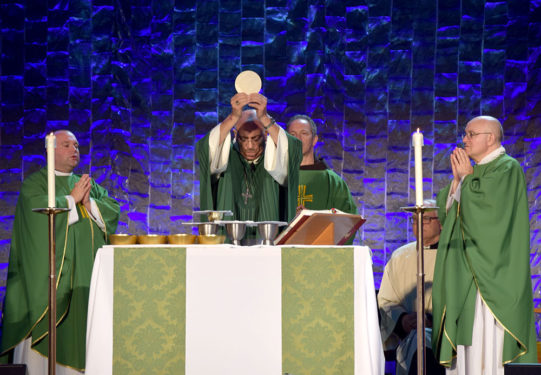 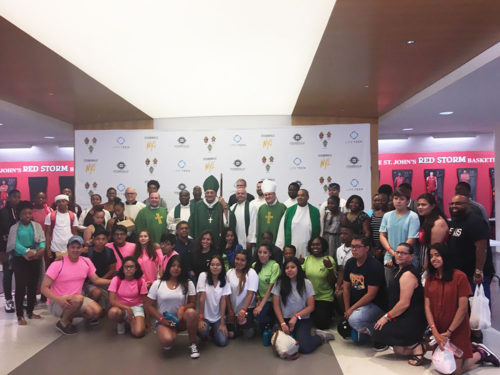 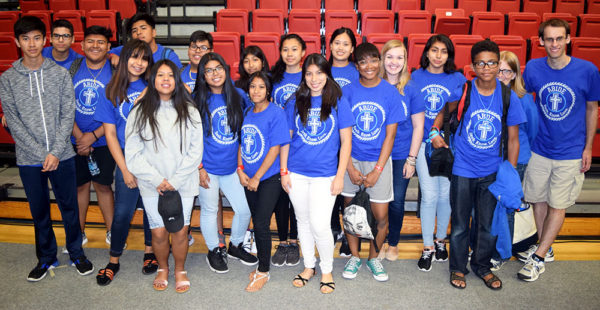 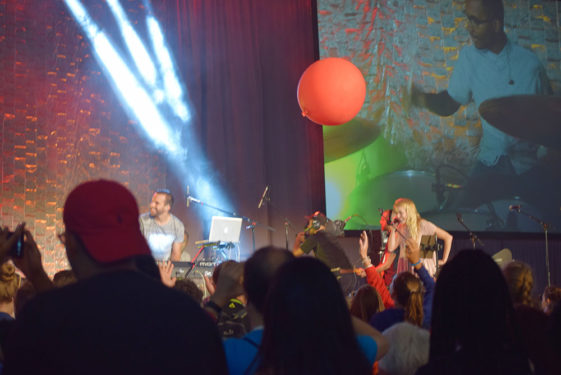 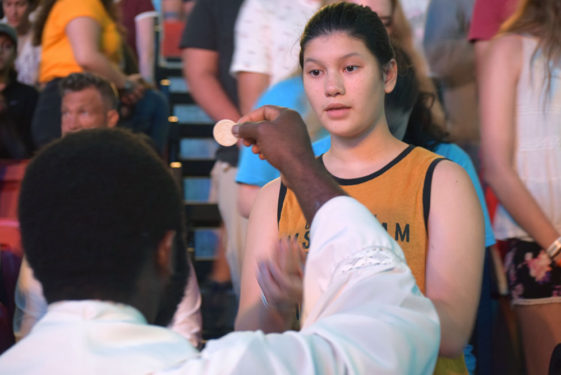 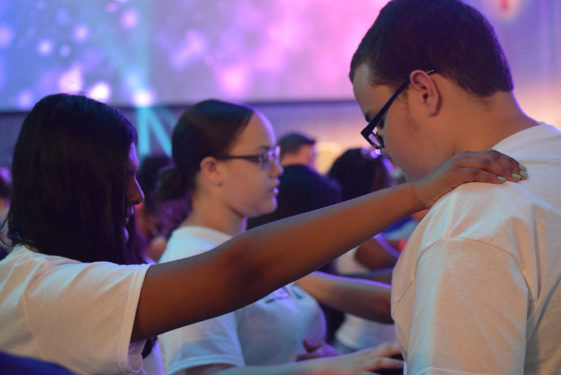 “I think it’s a great opportunity (for the youth) to uplift their faith,” said Bishop DiMarzio. “This is kind of a watershed moment where they can see things a little bit differently about themselves, about their lives and to really take their faith seriously.”

For David Goudet-Turner, the rising junior from St. Gerard Majella in Hollis, he says attending Steubenville will not only help him with his relationship with God, but will also help him build a solid community of faith-filled friendships.

“I’m Catholic, I believe in God, that’s a no-brainer that’s why I’m here,” said Goudet-Turner, who attends La Salle Academy in Manhattan. “Steubenville helps me make new friends.” He added, “A part of our group is Presentation (of the Blessed Virgin Mary) and they’re connected to us and I try to learn to connect with them.”

Steubenville NYC also brought together international youth groups from Canada and Spain, some who came back for a second time.

In 2016, Father Bruno Berchez travelled with his group from the Archdiocese of Barcelona with only two priests. For the 2017 conference, he returned with youth ministers from different parishes and members of the archdiocese’s delegation for a vision he has back home.

“Why not have a Steubenville conference in Barcelona, Spain, it’s our dream!”

Father Berchez and his group would have left the United States motivated by the way the conference executed the weekend theme entitled ‘Elevate.’ Inspired by the Book of Revelation, ‘Elevate’ dug into the heart of the matter: how will the young church be made new with Christ?

Mark Hart, the executive vice president of the Life Teen movement and one of the speakers during the weekend, had one idea. Hart has been a part of the parish-based youth ministry for 20 years. What started as a program in 1985, outside of Phoenix, Arizona, geared toward bringing teens closer to Christ in the Eucharist, has expanded to nearly 18-hundred parishes across the globe.

“I think the challenge is just getting them here to a place where we’re going to get you away from your routine, from the monotony of the routine or from the temptations in your routine, from maybe the lack of support from other peers or God forbid from their home and just to be able to bring them here and say ‘you are loved,’ just that alone you are accomplishing something,” said Hart.

“It’s ironic that in a culture getting increasingly wireless, we never unplug. But that’s a false intimacy, that’s not a true intimacy that God desires for us. You really have to pause and say ‘where have I been filling my life with noise, distraction and stimulation that’s earthly?’ and be able to hold back and say heaven has been trying to get my attention, God’s been trying to talk to me but I’ve been too busy.”

But the true testament to a reinvigorated relationship with Jesus can simply mean that after all the flashing lights dim down, the loud laughter grows silent and ice breaker games become distant memories, what will the young church desire next?

Maybe for some, it is just the desire to be still and listen to God. One highlight from the conference occurred after the closing Mass on Sunday, when Father Martignetti asked those discerning a call to religious life to step forward and be prayed over by the Church. More than 30 young men and women made their way to the front of the stage.

“I really didn’t know what it was about or what to do about it,” said Norvilia Etienne, who attends Queens College. “So when I went up, it kind of freaked me out a bit, but since then I’ve been growing in my faith, I’ve been growing in prayer and spending time with the Lord and He’s been kind of showing what it really means.”

Etienne volunteered at Steubenville for three years. It was during the first year she attended when she acknowledged the ‘stirring in her heart.’

For Viet Dinh, from Blessed Virgin Mary Help of Christians in Woodside, he seeks answers to the questions about the faith he was born into.

“I think it’s just better for myself, because as a teenager I feel like my belief, the way I think about my religion is really malleable. Like as I get older, things get rigid, it becomes a ritual, so I just want to see it in a new light before it happens.”

The rising sophomore from Brooklyn Technical High School in Clinton Hill said that what one of the speakers said during their talks sparked his intellect.

“One person came up and said that sometimes going to church is just a ritual, we don’t really love Jesus, like doing all this is a ritual, so we kind of have to look at it in a new light so it doesn’t become a ritual, but something we have to do, something that we want to do.”