BATTERY PARK — In a major moment for Catholics and immigrants in New York City, a statue of St. Frances Xavier Cabrini was officially unveiled on Columbus Day.

The dedication ceremony took place despite a steady rain that fell all morning and afternoon.

The statue overlooks New York Harbor in a portion of Battery Park that offers views of the Statue of Liberty, Ellis Island, and as Cuomo put it Mother Cabrini’s, “own borough of Brooklyn.”

Bishop Nicholas DiMarzio of Brooklyn served as co-chairman of the Mother Cabrini Memorial Commission, a panel put together by Gov. Andrew Cuomo last year to oversee the design and creation of a statue of the saint.

“This is a wonderful day,” the bishop told The Tablet as he arrived for the ceremony. “She helped build this city.”

Mother Cabrini spent a great deal of time working in Brooklyn after arriving in the U.S. from her native Italy in 1889. She founded the Missionary Sisters of the Sacred Heart of Jesus and founded 67 schools, hospitals, and orphanages. She died in 1917 and was canonized by Pope Pius XII in 1946.

Given Mother Cabrini’s history of helping immigrants, the fact that the area where her statue stands includes views of the Statue of Liberty and Ellis Island is significant. For many years, the Statue of Liberty greeted immigrants arriving in the U.S. by ship. Ellis Island is the place where many immigrants were processed by immigration officials before they were allowed to enter the country.

And the Diocese of Brooklyn is known as the diocese of immigrants.

There she is! #MotherCabrini stands tall in Battery Park NYC. pic.twitter.com/9eMn4ZUYvJ

The display will be lit up at night, according to Biagi, who said one light from a hereby pole is meant to give the impression that the moon is shining on Mother Cabrini and the children.

Bishop DiMarzio said he hoped that when people come to Battery Park and gaze upon the statue, they will come to recognize the unique role she played in serving the poor, the sick, and the downtrodden.

Angelo Vivolo, president of the Columbus Citizens Foundation, served as co-chair of the commission with the bishop. Vivolo called Mother Cabrini, “a remarkable Italian woman of faith.”

The Columbus Citizens Foundation sponsors the annual Columbus Day Parade in New York. The event was canceled this year due to COVID-19.

The fact that the statue was dedicated on Columbus Day was no coincidence. It was on Columbus Day last year that Cuomo stepped in to resolve a controversy that had erupted over Mother Cabrini. 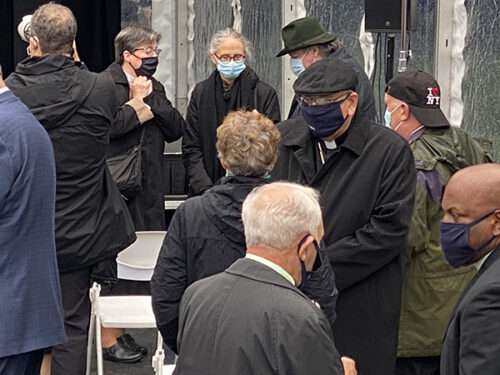 Bishop Nicholas DiMarzio waits for the ceremony to begin. 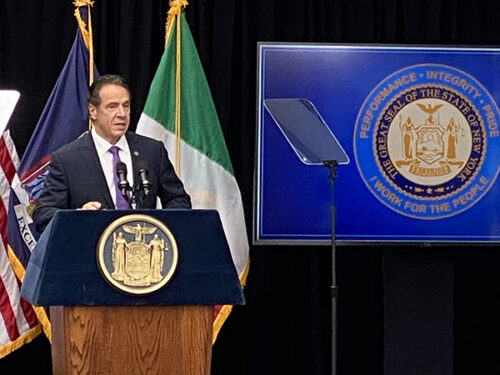 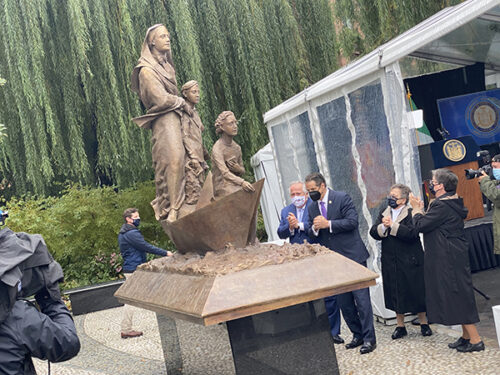 The statue of Mother Cabrini is unveiled. 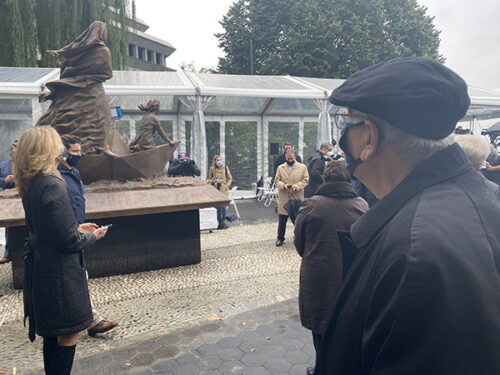 Bishop DiMarzio taking in the statue. 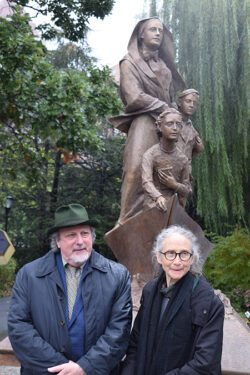 The artists who created the Mother Cabrini statue that stands in Battery Park.

Leaders of She Built NYC, an initiative started by New York City first lady Chirlane McCray to get more statues honoring women erected around the city, did not include Mother Cabrini on its list of honorees – despite the fact that Mother Cabrini had received the most votes in a public poll that asked which women deserved statues.

“This was a woman of faith and love. And no monument,” Vivolo said at Monday’s ceremony. “Gov. Cuomo promised to change that.”

Cuomo announced on Columbus Day 2019 that he would form a commission to serve for a suitable location for a statue to serve as a fitting tribute to Mother Cabrini. The state provided $750,000 in funding for the project.

“There was no doubt she deserved it,” Cuomo said.

The governor called the ceremony, “a silver lining” to the controversy and marveled that the commission was able to work so quickly. “We did it in one year,” he said. “It’s good to remember we can still accomplish good things.”

Describing Mother Cabrini as a woman who “broke the mold and achieved great things,” the governor noted that “saints are often forged in the crucible of adversity.”

Mother Cabrini arrived in New York City in 1889, a time when the city was dealing with smallpox, typhoid, and tuberculosis. Today, New York and the rest of the country is dealing with COVID-19.

“These are challenging times,” Cuomo said. “COVID has stressed each of us, all of us.”

John Heyer, the lay coordinator for the Italian Apostolate for the Diocese of Brooklyn, was a member of the commission.

“This statue of Mother Cabrini recognizes both her contributions as an Italian immigrant woman, as well as those of all Italian American and immigrant women. She is a shining symbol of what it means to care for the other person, the sick, the uneducated, the economically challenged, and the stranger, always putting the needs of society’s most vulnerable above her own,” Heyer told The Tablet.

“I hope that people will see this heroic statue, ask questions, learn about her outstanding life and work to imitate it as we all build New York’s future together,” he added.

One thought on “Statue of Mother Cabrini Unveiled in Battery Park”