WINDSOR TERRACE — New Yorkers heading to the polls for the primary this June will find something completely different on their ballot — the chance to vote for more than one candidate running in the same race.

Under a new ranked-choice voting system, voters will no longer be obligated to pick just one candidate but instead can rank their candidate preferences in numerical order. Voters can rank up to five candidates — giving their first choice the No. 1 ranking, their second choice the No. 2 ranking, and so on. 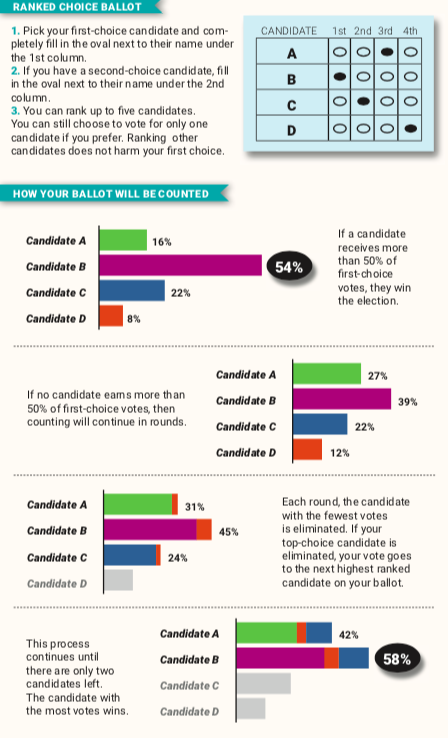 The new system will be used for the first time on a large scale in New York City during the political party primaries for mayor, public advocate, comptroller, borough president, and city council seats. The primaries are set for June 22 with early voting taking place June 12-20. Ranked-choice voting will not be used in the general election this fall.

When faced with a large field of contenders in a race, voters can pick their favorite candidate and make him/her their No. 1 choice by filling in the oval in the No. 1 column on the ballot and give other candidates their 2nd, 3rd, 4th and 5th rankings (if desired) by filling out the appropriate ovals next to their names.

Advocates said the new system, which is being installed this year after voters approved it in 2019 as part of a series of changes to the city charter, could open up a whole new world of possibilities for voters and candidates.

Sarah Goff, deputy director of Common Cause NY, an organization that supported the change, said one of the appeals of the new system is that “voters don’t have to have this fear of throwing away their vote.”

Goff noted that the Democratic Party’s mayoral primary will have 13 candidates on the ballot.

“It is a sprawling field. The voter can vote with their heart but also have a backup plan in case their candidate doesn’t do well,” she said. “You don’t have to make a choice between voting strategically and voting with your heart.”

Brian Browne, a political science professor at St. John’s University, predicted that it will change the way candidates campaign.

“In an ideal world, it should lead to less negative campaigning because you want to appeal to the broadest part of the electorate,” he said. “You don’t want to do anything to alienate another candidate’s supporters because you want them to consider you as their No. 2 choice.”

There are also some pitfalls when it comes to the new ballots. For example, a voter can not rank a single candidate more than once. If they do, only the top number selected for that candidate will count. Also, if a voter gives different candidates in the same race the same numerical ranking — such as declaring both Joe Jones and Jane Smith as a No. 1 — the ballot will be declared invalid and thrown out.

New Yorkers who want no part of ranked-choice voting can still vote for one candidate and call it a day.

The new system brings with it a fresh method of counting votes.

A candidate must reach a 50 percent threshold when ballots are counted to win. If no candidate reaches that threshold, it kicks off a new round of counting votes. The candidate with the least number of No. 1 votes is eliminated from the race and that candidate’s votes are then re-distributed to the contender listed as No. 2 on each voter’s ballot. The other candidates move up to the next round and the new votes are recalculated.

The rounds continue — eliminating the lowest person and re-distributing their votes each time — until there are only two candidates left in the race. At that point, the person with the higher number of votes is declared the winner.

Karen Tadross, a Bay Ridge resident, said she is eager to see how it goes.

“When you first hear of it, you think, ‘Why complicate something that works?’ But I’m curious to see how it works out,” she said. “One thing is that it eliminates the candidates who don’t have a shot at all. There are vanity candidates — people who are not serious but are running just to get their name out there.”

Ralph Perfetto, an actor and a former Democratic Party district leader in Brooklyn, likes what he has heard so far.

“It made me take a good look at other candidates, not just my favorite. I like being able to pick more than one person” he said.

However, not everyone is in favor. The new system does not appeal to Jennifer Uzzi-Silverio, a mom with two sons in Catholic schools in the Diocese of Brooklyn.

“It sounds to me like an attempt to distract the voters from talking about the real issues facing this city. It’s like the shiny new toy designed to grab your attention so you don’t talk about what’s going on,” she said. “We can’t fool around this time. This is a very important mayoral election.”

Browne said it’s too soon to tell if there will be negative side effects, adding: “I think right now the negativity would be that a lot of people don’t know how it works. There probably are some concerns that people will fill out that ballot wrong.”

According to Goff, the new system is better for candidates.

“Under the old system, you could win office with 25 percent of the vote or less. Ranked-choice voting produces a majority-supported winner. You can enter office with a mandate,” she said.

With the new system, candidates and voters can now say goodbye to runoff elections.

“It eliminates those expensive runoff elections, which we’ve seen in the past where if a candidate didn’t get the majority, they would have a runoff election, oftentimes two weeks later,” Browne said.