Being one of 2,500 people in attendance for evening prayers with Pope Francis at St. Patrick’s Cathedral, Manhattan, Sept. 24, seminarian Mark Bristol described the experience as intimate.

“You felt the Spirit,” he said “I felt the Presence welling up in me.” 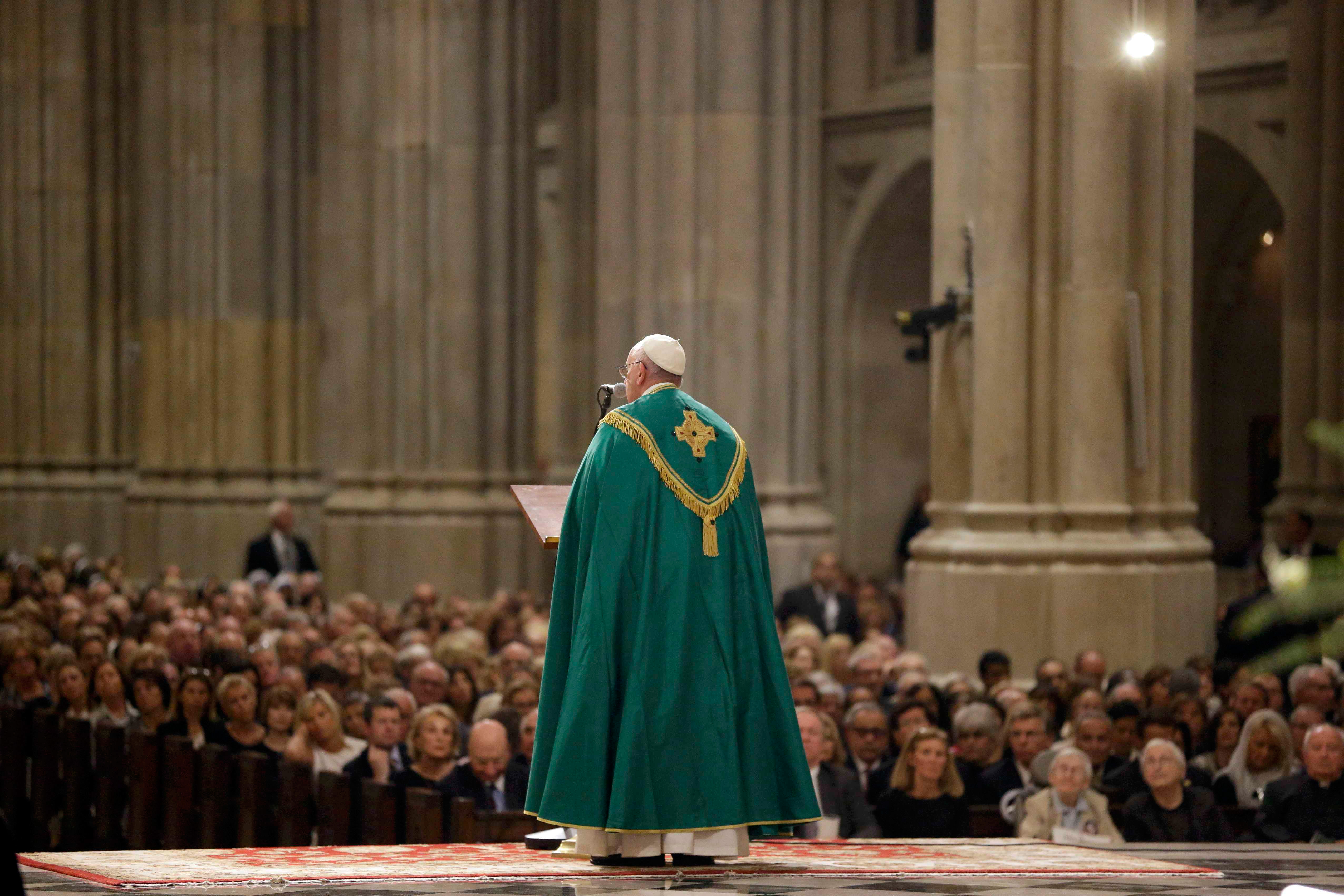 Evening prayers, or Vespers, are part of the Liturgy of the Hours, or Prayer of the Church, which priests and religious say every day.

Bristol said having the opportunity to pray Vespers with the Holy Father, enabled him to feel the unity of the Church. He has always known that the Prayer of the Church brings together the universal Church throughout the world, but experiencing it with the pope made that unity more palatable.

Father Michael Bruno, a professor at St. Joseph’s Seminary, Dunwoodie, came to the prayer service with his students. He said it was a great blessing to see the Vicar of Christ present in areas that are very familiar to New Yorkers, such as Central Park, the 9/11 Memorial and the streets that New York City dwellers navigate, usually without much thought.

During the Vespers service Cardinal Timothy Dolan welcomed Pope Francis, and declared the pontiff an official New Yorker as of the moment that he walked through St. Patrick’s doors.

Bristol said it is iconic, that the pope, who refers to himself as a son of immigrants, came to the city through JFK seeing the Manhattan skyline and touching down in Queens as do most immigrants who come to New York.

“His presence here reminds us that Christ is present in our daily lives,” Father Bruno said.

As part of the Vespers service, Pope Francis gave a homily that was directed at priests and those in religious life. He spoke in Spanish and a translation was screened throughout the cathedral.

“As a man studying for the priesthood, (the Pope’s) words were a challenge,” said Robert Mema, a seminarian for the Diocese of Brooklyn. “His words smack you in the face, not in a bad way.”

Bristol, who is also a seminarian with the Diocese of Brooklyn, said he plans to re-read the Pope’s homily many times and to continue studying it because it helped renew his commitment to the Church.

“It’s just giving me encouragement to keep stride,” he said, and is a good cure for the touch of senioritis he has been feeling.

Among the messages that Bristol is thankful for, is the Holy Father’s insistence that success not be measured by human standards.

“If at times our efforts and works seem to fail and produce no fruit, we need to remember that we are followers of Jesus and His life, humanly speaking, ended in failure, the failure of the cross,” the Pope said.

Bristol said he knows that it is his job to plant seeds and to not expect to see the fruit, for that is God’s role. Hearing that message recommitted him to a life of service.

The seminarian also said he is reflecting upon the pope’s message on the use of free time.

“Another danger comes when we become jealous of our free time,” the pope said. “Rest is needed, as are moments of leisure and self-enrichment, but we need to learn how to rest in a way that deepens our desire to serve with generosity.”

At the end of his homily, Pope Francis had a special message to religious sisters. This came after the Vatican closed a three-year investigation of the Leadership Conference of Women Religious last spring.

“In a special way I would like to express my esteem and gratitude to the religious women of the United States. What would the Church be without you?” the pope said. “To you, religious women, sisters and mothers of this people, I wish to say ‘thank you,’ a big thank you… and to tell you that I love you very much.”

She said the pope’s message helped her see that the Church still needs religious sisters, and so, she feels recommitted to work in the vineyard of the Lord.

The principal of the all girls’ high school was thankful for the experience to pray with the Holy Father. It was the first time she has seen a pope in person. “It was a privilege to be there,” she said. “It is a privilege I don’t take lightly.”

Being in the presence of the Holy Father has given Sister Joan the opportunity to witness firsthand the pope’s ability to “bring people back from the margins.”