Local artist Patricia Brintle took a call from her friend seven years ago.

The friend called to lament the devastation of the January 2010 earthquake that killed around 300,000 people and displaced 1.5 million more.

Diocesan-wide collections for earthquake relief were already underway on behalf of Catholic Relief Services and the bishop was working closely with aid agencies.

The friend wanted to help a rural church in the Diocese of Jeremie, Mary Queen Immaculate, but did not know what to do.

At the suggestion of Auxiliary Bishop Guy Sansaricq, who was born in Jeremie, Brintle set up a not-for-profit 501 (c) (3) group called From Here to Haiti.

When she delved further into the Church of Mary Queen Immaculate, she realized this was going to be harder than she anticipated. This was the main church that serviced six chapels. This was going to take serious work.

Reality did not deter Brintle. She had taken a planning trip to Abricots with her husband, Joe. Ellen Rhatigan and Robert Choiniere, who were directors of diocesan Pastoral Planning Committee at the time, went along, as well as Eddy Leveque, the From Here to Haiti, vice-president. They all paid for their own transport and stayed with locals.

The organization got 75 locals to volunteer to work on their own church. On the first day they were able to take down parts of the old roof and work on the columns. When the local mayor came to see the progress, he was amazed. He said the organization was able to do in one day what usually takes three months.

After one week of work, Mary Queen Immaculate Church was restored and ready to be used. From Here to Haiti successfully completed its first project. And the news of hope spread like wildfire. Requests came pouring in.

Hurricane Matthew hit Haiti on Oct. 2, 2016, further devastating a country still on the road to recovery. When the hurricane made landfall, Mary Queen Immaculate had a new problem for its new pastor. Father Frantz Eugene watched as Hurricane Matthew ripped away the roofing sheets from his church,

The priest already had the difficult task of being pastor and sole priest at Abricots. Although he had the help of chapel directors, he could only visit each chapel for Mass once a month. Some of the chapels are only accessible by foot; one takes the priest on a five-hour hike each way.

As the roof was being blown away, he thought his community might just go with it. He experienced a personal crisis, losing a sense of hope. He even thought of asking for a transfer.

“When the hurricane happened, all eyes are on you, what are you going to do,” Father Eugene said with the help of an interpreter during a recent visit to family living in New York. “I thought with the hurricane, the community would fall.”

He believes God saved him from his state of despair. From Here to Haiti was one of the groups that brought back a sense of faith and joy to his parish community.

The pastor contacted the Queens group because he knew the organization had helped in the past.

Brintle said it was difficult because there were many requests coming in at the same time. But, she made a deal with Father Eugene.

From Here to Haiti would pay for the materials to help replace the roofing sheets, but the parish had to provide its own transportation and work force.

This is not exactly what Father Eugene was hoping to hear. He did not think he could pull in such resources.

Brintle held her ground. Either the parish would pick up the materials and put up the roof, or the money for the materials would go elsewhere. 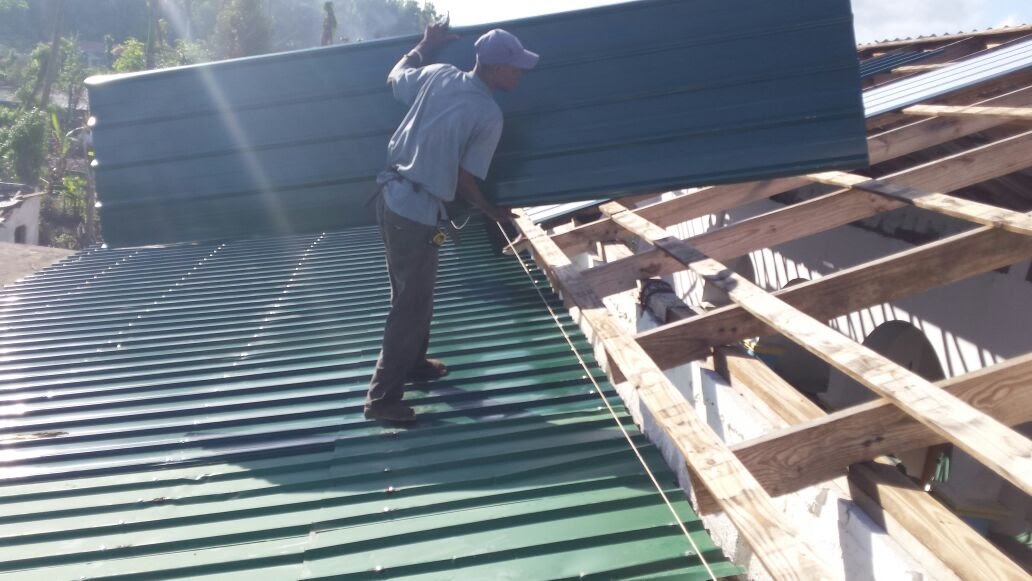 His back against the wall, Father Eugene was able to motivate his community. Someone was able to secure a truck and others volunteered. Mary Queen Immaculate had a new roof in time for Christmas. The parish celebrated with candle-lit processions pronouncing the light of Christ.

Father Eugene said From Here to Haiti did more than just provide new roofing sheets. It gave the community the opportunity for success. It expected the parish to take ownership of the project and the parish rose to the challenge, making success feel that much more sweet.

Father Eugene said he learned a lot from Brintle and From Here to Haiti. For example, he has realized that if the community is more involved in parish initiatives, the people will value them more. He has also learned how to stretch a dollar.

Brintle said that From Here to Haiti understands that pastors in Haiti fill countless roles. When they must also be building project managers, it does not come easily.

Father Eugene said he would rather work with From Here to Haiti than with other organizations that just hand parishes money. The process, he said, is tough but fair. It requires plans for every project. Parishes cannot simply ask for $20,000. They must provide a breakdown of how the money will be used.

Brintle is not afraid of saying “no.” When a parish told her they needed money for a truck to move rocks, she suggested that they instead get the school children to each carry a couple of rocks. She said she does this in part to help the communities in Haiti organize themselves better, and in part because she feels a personal responsibility to donors for their sacrifice.

Joe Brintle said his wife is in a unique situation to help bridge the divide between donors and beneficiaries. Patricia grew up in Haiti, is half Haitian and half French and lives in New York. Because she belongs to so many different worlds, she can better understand each community’s assets, needs and cultures.

Father Eugene said From Here to Haiti is unique among aid organizations because it depends on personal relationships, and cutting out a lot of bureaucracy. Unfortunately, he said many other aid groups are not as in tune with the needs of the people on the ground.

“Other organizations can be like a twig-fire: big flame but no substance,” he said. From Here to Haiti stokes the fire with logs.

Brintle said donors have the opportunity to join any From Here to Haiti service trip. They just have to pay for their own transportation.

Now, the Haitian-born artist from St. Luke’s parish, Whitestone, who just wanted to do a little good, finds herself at the head of an active transnational aid organization that has helped over 20 parishes complete 30 projects. Fundraising comes mostly from art shows, dinner-dances and walk-a-thons.

For more information about this organization, visit www.fromheretohaiti.org.