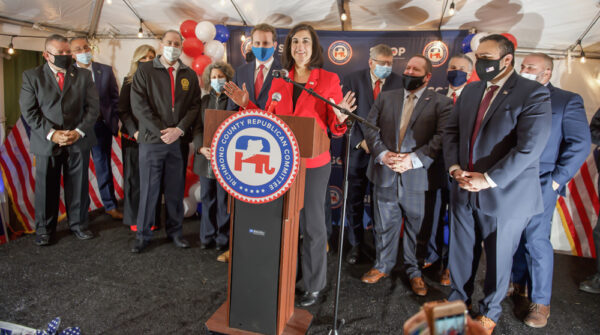 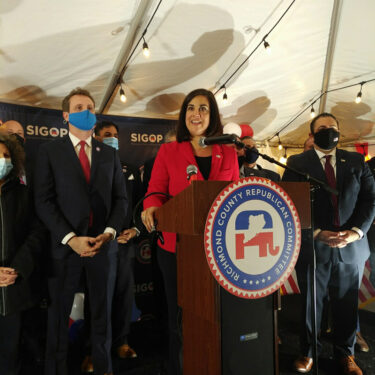 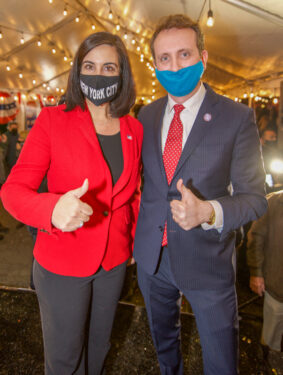 WINDSOR TERRACE — Election Day 2020 proved to be a great day for Republicans in South Brooklyn, the only Conservative bastion within the borough. It was a complete reversal of what happened in 2018 when a coalition of Democratic candidates swept through the area and took over the Senate and Congressional seats both held by Republicans at the time.

Two years ago, Max Rose claimed the Congressional seat from incumbent Dan Donovan, and Andrew Gounardes had defeated longtime State Senator Marty Golden. That left Assemblymember Nicole Malliotakis the only Republican standing, not only in Southern Brooklyn but in the entire borough.

That all changed on November 3 when Malliotakis handily defeated Rose for the 11th District Congressional seat, which encompasses all of Staten Island and parts of Brooklyn, including Bay Ridge, Dyker Heights, and Bensonhurst.

Malliotakis, the daughter of a Greek Orthodox father and a Cuban Catholic mother, proudly proclaimed her victory in a moving speech that spoke of her “common-sense conservative values” while voicing support for the NYPD and all law enforcement and first responders.

“Today, Staten Island and Southern Brooklyn sent a loud and clear message that will resonate from City Hall to the halls of Congress,” exclaimed Malliotakis. “This race was about the brave men and women of the NYPD and all our law enforcement and first responders; those who keep our city safe and rush into danger in our hour of need.”

She added that she would always have their backs while she’s in office.

Malliotakis, the first Hispanic-American elected from Richmond County, won the State Assembly seat in 2010 and worked hard on initiatives benefiting her district, focusing on quality-of-life issues that she claimed were falling by the wayside.

“Faith-based values played a huge role in my election as did my opposition to the efforts of some elected officials who used the COVID-19 outbreak as a reason to place uncalled for restrictions on churches and other houses of worship throughout the city,” Malliotakis told The Tablet.

Malliotakis believes that her deep roots within the Greek Orthodox and Catholic communities enabled her to better connect with a wide range of voters of various faiths and cultural backgrounds in her district.

“Faith-based support spanned the major religions, to the point of being endorsed by several newspapers that cater to the Orthodox Jewish community, including the highly influential Jewish Press. I’ve never shied away from speaking out on a wide range of issues important to people of faith; whether it was voting against the barbaric full-term abortion legislation in the New York State Assembly, fighting City Hall’s misguided efforts to block a statue memorializing Mother Cabrini and her great works or taking a stand against socialism and communism which highly restricted the practice of my mother’s Catholic faith in her native Cuba,” explained Malliotakis.

Tannousis, a member of the Catholic Maronite and Greek Orthodox communities, said that he was proud to have garnered both the Republican and Conservative Parties’ support.

“I look forward to being a common-sense voice in a legislative body that lacks common sense,” Tannousis told The Tablet. “I will continue the great work of Nicole Malliotakis and continue to fight for our constituents.” Malliotakis had supported Tannousis from the start of his campaign and saw him as the natural progression to carry on her work in the Assembly.

Bruno, a successful businessman and entertainment impresario played a key role during the ’70s disco era. He started his career at 2001 Odyssey, the Brooklyn club made famous in the John Travolta classic “Saturday Night Fever,” filmed primarily in Bay Ridge.

Also, Mark Szuszkiewicz led incumbent Mathylde Frontus on election night in his bid to take over the 46th District Assembly Seat, which covers Coney Island, Sea Gate as well as parts of Bay Ridge, Dyker Heights, Brighton Beach, and Gravesend. The Brooklyn-born Szuszkiewicz, who holds both health insurance and real estate licenses, is also a practicing Catholic and ran on reducing taxes and returning civility to the neighborhood.

New York State Conservative Party Chair Jerry Kassar believes that faith and family values made all the difference in this year’s election. “Values voters are one of the more overlooked coalitions that came together to influence voting behavior this year.  In particular, I believe many Catholics, including myself, took into consideration when choosing who they would support, a candidate’s positions on issues ranging from the sanctity of life to support for school choice,” Kassar told The Tablet.

“Certainly, the interactions between Judge Amy Coney Barrett and members of the US Senate brought into millions of living rooms the importance of having high officeholders who are grounded in faith-based principles,” Kassar added.

“As the Chairwoman of the Brooklyn Conservative Party and a practicing Catholic, I am proud that the candidates that ran on the Conservative Party line are advocates for religious freedom and the sanctity of life. These positions are part of the Conservative Party platform.  Nicole Malliotakis, Vito Bruno, Mark Szuszkiewicz, and Michael Tannousis all reflect these views and will support legislation that will safeguard and promote the right to freely practice our faith and the fundamental right to life,” concluded Vella-Marrone.