Bishop Nicholas DiMarzio and the New York Blood Center recognized the parishes, schools and individuals in Brooklyn and Queens who made significant contributions to the 2016 blood drive campaign, which accounted for 8,000 blood donations, an increase from the past two years.

In his opening prayer during the reception at the Immaculate Conception Center, Douglaston, May 2, Bishop DiMarzio reminded the faithful that blood is an imperative part of life within a community.

“The donation of blood is a sign of social-consciousness because unless people are willing to give blood, the health of our communities will not be very well,” he said, “and it’s so much true of everything we do. Our social consciousness does come down to being generous, generous to the point of being willing to give of ourselves.”

While parishes participate in blood drives around the diocese, the donors rarely get to witness more than just the transaction of when their life-giving liquid leaves their veins and enters into quarts of plastic packages. Rarely do the donors get to hear the person on the other end say ‘thank you.’

For those who participate in such acts of charity, rarely do they even need such recognition.

At the ceremony was 12-year-old Seema Sawh, who confidently, introduced a woman who has been receiving blood transfusions since she was 18-months old, a woman who had to rely on donations on a monthly basis since kindergarten, even to the point of every other week as a young adult.

The seventh-grader from Floral Park introduced Radhika Sawh, her mother, who suffers from thalassemia, an inherited blood disorder characterized as having fewer blood cells than normal.

Her mother told the audience that she cannot overcome the hurdle that requires her to receive blood all her life, but she constantly witnesses to the kindness of strangers.

“I’ve come to terms with the fact that there will not likely be a cure for my disease in my lifetime,” Radhika said. “But that’s okay, as long as I’m fortunate enough to have people like yourselves who take the time out of their schedules to help organize blood drives and also donate blood.

As attendees shared a meal and conversations, one woman who had been organizing blood drives at her parish for more than 40 years was recognized for her service. Millie Ricciardi has been faithfully coordinating blood drives at Our Lady Help of Christians in Midwood since 1972, when a fellow parishioner asked her help when she found out her son needed blood. At the time, Ricciardi headed into Manhattan but was advised to hold the drives at her parish. She hasn’t stopped since.

Ricciardi has been a member of the parish since 1972 and attributes her success to the fact that she knows a lot of the parishioners, since her seven children grew up in the Brooklyn parish.

“We topped 5,000 pints of blood and we’re not a big parish,” said Ricciardi. “For the past three summers, we were asked to have a drive in August and we did it and we did good. Thank goodness.”

Bishop DiMarzio highlighted that the increase in donation numbers was a reflection of the people involved with organizing blood drives.

“It shows us that really it’s taking hold in our diocese,” he added. “So we’re really pleased that we can be part of this cause that is so critical to those in need of blood.” 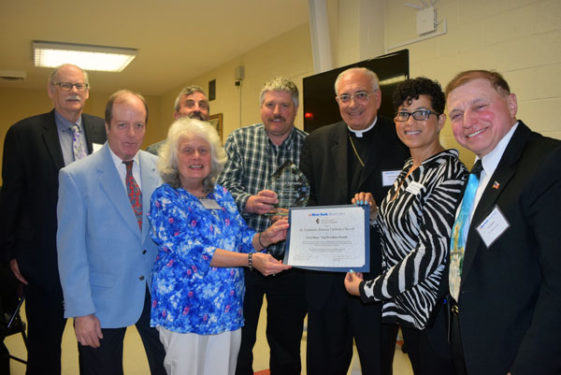 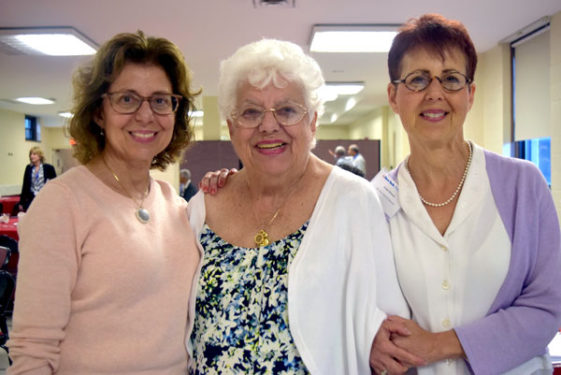 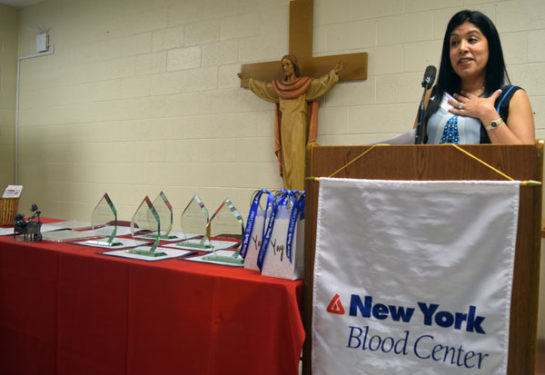 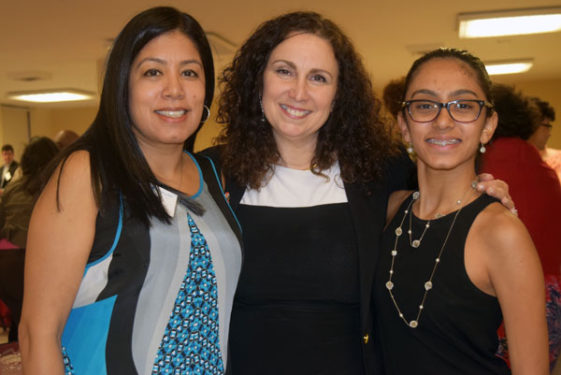 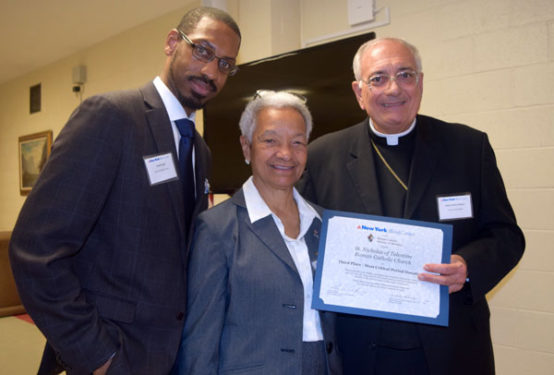 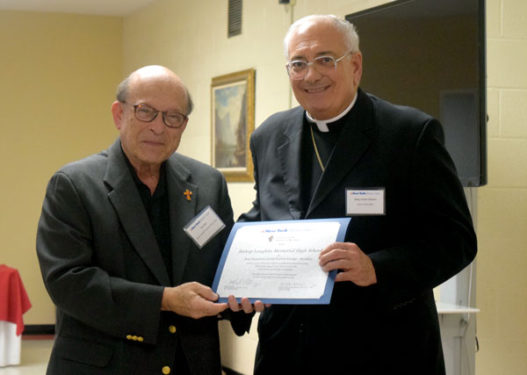 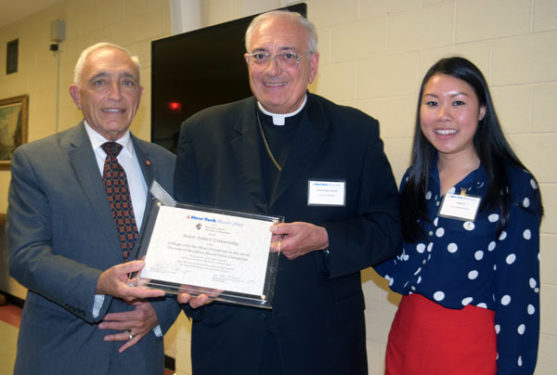 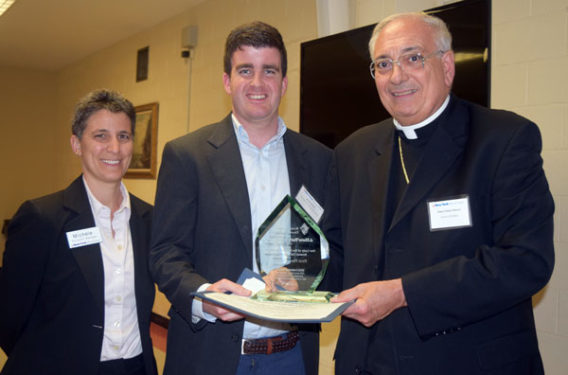 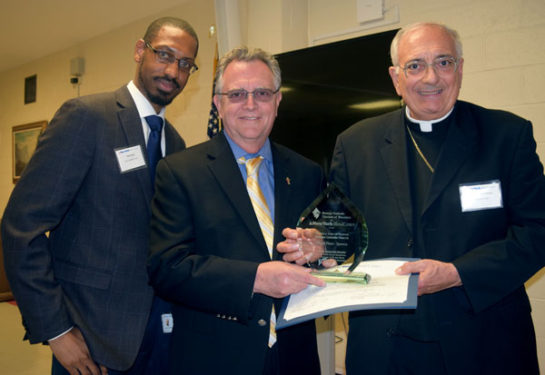 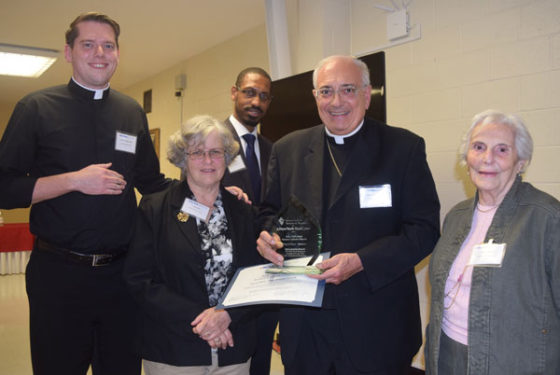 St. Columba contributed the highest number with 295 donations in a calendar year, followed by Our Lady of the Blessed Sacrament with 228 donations. Close to 200 donations came from St. Francis de Sales, Belle Harbor.

Academic institutions within the diocese were also recognized. Holy Cross H.S. in Flushing was the top high school contributing 265 donations over the course of the school year. Bishop Loughlin M. H.S., Fort Greene, was the top donor for Brooklyn schools.

The following Catholic colleges also were honored: St. Francis College, Downtown Brooklyn had the largest increase in donations; St. Joseph’s College, Clinton Hill, had the highest average; and St. John’s University, Jamaica contributed the most donations with nearly 800 pints pouring in over the year.

Related: Marine Park Parishioners Give the Gift of Life