BUSHWICK — A Pew Research Center study released on Oct. 17 shows that Americans who identify as “nones” — those describing themselves as atheists or agnostics or having no religious affiliation — are the biggest group in the country, outnumbering Catholics. 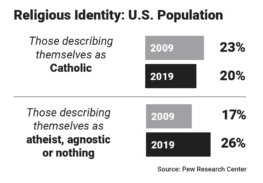 Still, in the Diocese of Brooklyn, there are signs of vibrancy in the church, especially among Hispanics. In Bushwick. Father Jorge Ortiz-Garay, administrator of St. Brigid, said that his parish is heavily Hispanic and that he has seen so many kids at the church’s youth group that he is starting a monthly youth Mass.

But Father Ortiz-Garay’s experience isn’t backed up by the Pew report, which said 47 percent of Hispanics in the U.S. are Catholics, down from 57 percent a decade ago. Mario Paredes, a longtime leader in the Hispanic-American community, attributed the drop to America’s consumer culture.

“Never mind if the church you belong to has historic continuity to the founding of the church by Jesus to today’s Christianity,” Paredes said. “That is not important. What is important is to find a church that is homey, a pastor that speaks the language, a community that will make me feel good.” 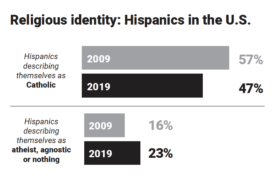 At Father Ortiz-Garay’s parish, the young adult group draws 20 people to its meetings and events on a regular basis. He credits Bishop Nicholas DiMarzio and the bishop’s concern for young people. “When the young people find something real, truthful and honest, they come,” Father Ortiz-Garay said. “If they find something here and they’re happy here, they’re going to invite their friends.”

The Chinese Catholic community is also seeing a boom in converts in Brooklyn and Queens, where they account for one in 10 baptisms annually. Meanwhile, the Pew report said that less than 50 percent of “millennials” — those born between 1980 and 1996 — considered themselves Christians and 40 percent identify as “nones.”

Paul Morisi, director of youth and young adult ministry in the Diocese of Brooklyn, sees the Pew report as a chance to introduce new tools in evangelization. He noted that the diocese started the Catholic Youth Ministry Initiative eight years ago to train parish youth ministers in an effort to attract more young people to the church.

“We have this great opportunity to do evangelization in new and creative ways,” Morisi said. “We just have to be empowered to go out there and do it in those ways to meet the people where they are today.”

One of those youth ministers is Lauren Gentry, 26, who serves at Blessed Virgin Mary Help of Christians, Woodside. She sees a restlessness in young people’s hearts, saying they are asking questions like, “What’s my purpose? Do I matter? Am I good enough?” Many young Catholics see the faith as legalistic and all about checking off a series of boxes in order to get to heaven, she said. 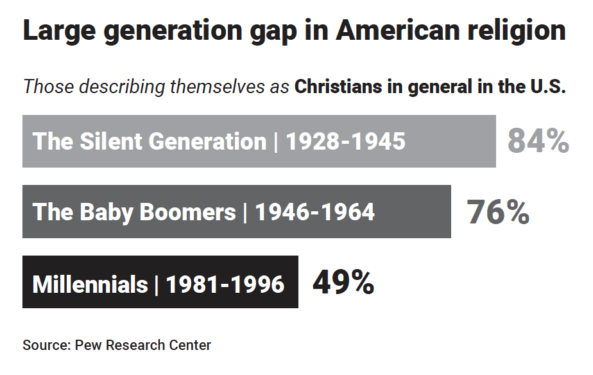 Gentry pointed to a new Centers for Disease Control and Prevention study that showed the youth suicide rate rose 56 percent between 2007 and 2017. “It was alarming, but not surprising, because I see it in my teens every single day with anxiety,” Gentry said. “I see it with people in my generation every single day that are really struggling with a lot of pain.

“I feel like another important thing for us to do in the Catholic Church is help people see where Jesus is in their pain.” Gentry said that when she arrived at her parish, many teens were quiet, sad and closed off, including one pre-teen girl. Now that girl is 14 and attends the parish’s “youth night” every Sunday.

According to Gentry, the teenager’s father saw what God was doing in his daughter’s heart and wanted the same for himself. Now, the two go to Mass together, and they are getting more involved in the parish. Gentry said the example of the teenager and her father is just one of a number of similar stories.

“The youth ministry has really become a family where the teens always know that they belong there and that they are supported by people who really care about them and understand them,” Gentry said.

Twenty to 30 kids come to the weekly youth nights at the parish, and Gentry regularly sees 80 to 100 different teens. Meanwhile, the last time the Vatican collected data worldwide more than 14 million new Catholics entered in the church in 2017, bringing the total number of Catholics to 1.3 billion.