HOLLIS — A prayer garden that Shrine Church of St. Gerard Majella, Hollis, set up in its parking lot was vandalized twice in September before the suspect was caught the third time.

The vandalism, which caused more than $10,000 in damages, was part a spate of crimes at Catholic churches in northern Brooklyn and southern Queens this past summer, raising the already pressing issue of how churches in the all-urban Diocese of Brooklyn can protect their buildings and property.

The answer is that churches must do many things, ranging from installing and upgrading security systems to telling staff and parishioners to be on the lookout for suspicious activity.

Technology is a crucial piece of the puzzle. At St. Gerard Majella, which was also robbed last fall, surveillance cameras captured the crimes in September. That helped cops find the perpetrator — Nasra Alnadrahi, 69, of Jamaica, who was declared men-tally unfit for trial and was committed to a hospital.

Father JosephJude Gannon, the pastor, upgraded his security system after the 2018 incidents by adding features to the church’s surveillance cameras and installing motion sensors. It is important to have the systems in place and to update them frequently, he said.

In Richmond Hill, Holy Child Jesus Parish was taking up a monthly collection for security cameras when a man broke into the church’s basement on Aug. 10.

Auxiliary Bishop Octavio Cisneros, the pastor, recognized the church was vulnerable and needed more than just cameras, and so Father Christopher Heanue, the parish’s administrator, has been look-ing into buy-ing a more complete security system with alarms, motion sensors and a closed-circuit television system that can be monitored from the parish office. 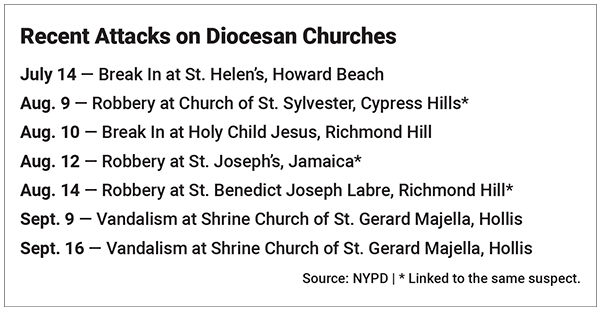 Bob Ordan, president of Knight Nets Inc., one of the companies that Father Heanue has considered, said parishes should have surveillance cam-eras and a security system and should train staff and educate parishioners about keeping their church safe.

Father Gannon said that earlier this year he had the local police precinct train ushers on the best ways to remain aware of who comes and goes.

“No one way is going to solve anything,” Father Gannon said. “We need to train the community to say, ‘This is our building. This is Jesus’ home and our home, as part of the body of Christ. If someone was in your apartment build-ing or walking around your backyard, you would stop them and say, ‘Hello, can I help you.'”

Despite the many incidents, pastors are deter-mined to keep their churches open.

For example, Father Francis Colamaria, pastor at St. Helen’s, Howard Beach, keeps the church open until 9 p.m. every day, even though it has been burglarized three times this year.

“We have parishioners who love their parish, love their God, and love to pray,” he said. “We don’t want to lock everyone out.”