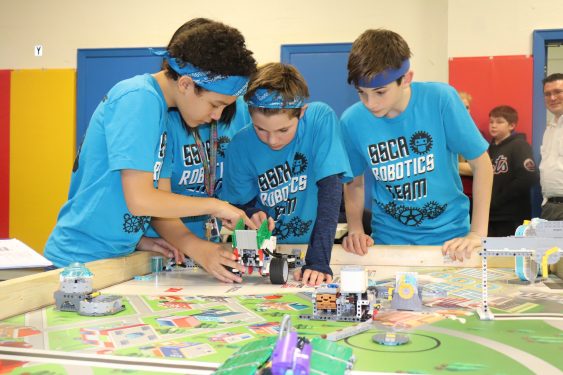 Mini-robots had three minutes to accomplish as many life-sustaining tasks as possible to earn points for their pre-teen coders during a friendly competition at St. Saviour Catholic Academy.

The Park Slope school hosted its very first FIRST Lego League scrimmage by inviting their peers from J.H.S. 278, Marine Park, for the day-long event on Saturday, Jan. 27. The teams spent the morning presenting their research and development on how humans, through the use of robotics, interact with water.

The seventh and eighth graders showed off the robots they built and coded to perform tasks such as putting out fires and transporting drinkable water. The teams spent the year analyzing how governments and companies deal with water-related challenges and then designed their own solutions.

In the afternoon, the robots were put to the test on challenge courses. In pairs of two, the pre-teens sent off their robots to complete missions on mini-worlds built on tabletops. The students tinkered with the physical robots to assist them in the different tasks, but the coding was all done beforehand. Their teammates enthusiastically cheered from the sidelines as pin-striped judges tallied up the scores.

“It’s all very exciting,” said Sue Walsh, principal of St. Saviour. “It’s a great honor for us to host this.”

She was excited to be able to invite a more experienced team from a public school to compete with her students. On top of the academic and teamwork benefits her students receive from having a FIRST Lego league, inviting students from a different type of school opens up the world to them and teaches them about inclusivity.

“It doesn’t matter what school you come from,” she said. “We come together.”

The league is an international organization ran by the toy company, Lego Group. All materials used must be from Lego and playoffs start on the regional level and finish on the international stage. A friendly scrimmage is a chance for teams to practice against each other.

St. Saviour entered the Lego League last year at the initiative of two of its own teachers, Aleanbh Finn and Stephanie Germann, who now coach the school’s two teams.

Walsh said the school wants to support projects that its teachers are passionate about and the board was especially enthusiastic about bringing a STEM (Science Technology Engineering and Math) initiative into the school. The school has one team each in seventh and eighth grades, with 10 students per team.

In order to be involved in the team, the students have to be on top of their academic classes because the work is demanding. The teams meets five times a week for an hour before school starts.

“I don’t mind waking up early to go to school to do robotics because it’s a lot of fun,” said eighth grader Katherine Cornet, adding that even before she joined the club she would spend much of her allowance on Legos.

For the Cornet family, early means 5 a.m. Katherine’s mother, Trina, said it can be difficult to get everyone out of the house at 6:15 to make it to the school on time. (Katherine’s twin sister, Hillary, is also on the team.) Trina said she had times when she wanted to give up part of the rigorous schedule, which includes after- school advanced math classes, but her daughters pushed for it.

“When kids do what they love, they excel,” she said, quoting her daughter’s soccer coach.

The girls’ father, Mitchell, said the robotics team has helped their daughters think strategically. He notices this especially in their soccer play because they are now able to think ahead in the game.

“It’s kept them focused,” he said. “We think it’s especially important for girls to be introduced to STEM.”

Building strong social skills is another reason Mitchell Cornet is happy his daughters are part of the league. He recounted how one student was unable to finish missions during a competition last year and felt terribly about it. The rest of the team though assured him that it was a team effort and it was not the student’s fault.

Seventh grader Sydney Whitehall is interested in a career in robotic-engineering, but before she joined the FIRST Lego League at St. Saviour, she did not know anything about coding. Her team embraced her and showed her the ropes.

“It’s amazing how much we become as one just because of this robotics team,” she said.

The school plans to expand the program to younger grades next year.

Finn, one of the founding coaches for the initiative, said the project is important to her because it expands students’ horizons.

“I’m a social studies teacher and I like robotics,” she said. “I wanted them to see that they don’t have to pigeon-hole themselves.”