WINDSOR TERRACE — The State of New York has responded to the petition filed by the Diocese of Brooklyn with the U.S. Supreme Court over the diocese’s religious freedom case.

In legal documents filed with the Supreme Court on Nov. 18, the state opposes the diocese’s move for an injunction against Gov. Andrew Cuomo that would prevent him from continuing stringent regulations he imposed Oct. 6 on houses of worship in neighborhoods with high COVID-19 positivity rates. In some cases, only 10 people were allowed to attend religious services, regardless of the normal capacity of the church.

The diocese filed suit against Cuomo, in his official capacity as governor, on Oct. 8 charging the regulations violate religious freedom and unfairly target churches. In its lawsuit, the diocese also charged that the state’s restrictions are closing churches while at the same time allowing stores that draw large numbers of people to remain open.

The legal document, signed by New York State Solicitor General Barbara Underwood, argues the restrictions are necessary and are being applied fairly.

Click here to read the state of New York’s response to the petition filed by the Diocese of Brooklyn. 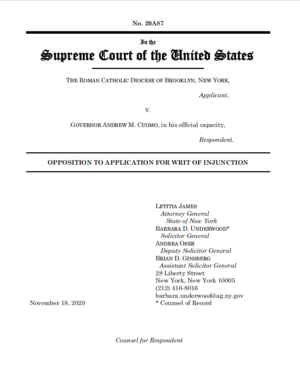 “Geographically, the particular limits of which the Diocese complains apply only to micro-areas designated as red or orange zones based upon the presence of COVID-19 clusters. The drawing of zone boundaries is data-driven. And on an absolute scale, the zones are small; the typical red zone is one mile in diameter, with a half-mile-wide orange zone buffer encircling it, and a half-mile-wide yellow zone encircling that,” the state’s document reads in part.

The diocese filed an emergency application with the Supreme Court on Nov. 9 following two hearings in federal court in Brooklyn in which judges sided with Cuomo.

New York State contends that the diocese’s argument over closing churches while allowing stores to remain open is a weak argument.

“As the district court found, however, none of those businesses present anywhere near the same risk of COVID-19 spread as religious services,” the state’s document read. “They do not ordinarily share religious services’ specific risk factors — large numbers of people from different households arriving simultaneously; congregating as an audience for an extended period of time to talk, sing, or chant; and then leaving simultaneously — as well as the possibility that participants will mingle in close proximity throughout.”

On Nov. 19, Randy Mastro, the attorney representing the diocese, filed a legal brief with the Supreme Court reaffirming the need for the court to grant an injunction against New York State. In the brief, Mastro took issue with the points raised in the state’s argument.

“The Governor offers no meaningful response to the issues raised in the diocese’s emergency application,” Mastro wrote.

“In fact, the Governor concedes that numerous secular businesses in the so-called ‘red’ and ‘orange’ zones are allowed to remain open without any capacity restrictions at all, and thus are treated more favorably than ‘houses of worship,’ which are effectively shuttered,” the brief reads.

Mastro charged that the governor’s executive order “sets up a troubling and unsupported strawman — that houses of worship present, categorically, a ‘super- spreader’ risk.’”

Cuomo cited examples of COVID-19 spread from the earliest days of the pandemic, according to Mastro, who wrote that those examples date from a time “long before people knew about things like social distancing and mask wearing.”

The diocese contends that Cuomo “admits that, since July 2020, the diocese has voluntarily imposed upon its churches its own COVID-19 prevention protocols, and that none of its churches have experienced any outbreaks.”