The event commenced with a prayer, the pledge of allegiance, and the Star Spangled Banner performed by the Naval students.

Among those who addressed the school body before the main performance was alumnus John Brown who served as keynote speaker.  Brown was one of the grand marshals at the Veterans Day Parade, during which the Naval Academy Glee Club also performed.  He is also the chairman of the board of No Greater Sacrifice, a non-profit organization, which helps provide a higher education for the children of wounded and deceased military members.

He told the students that time is among the most precious gifts they could offer an veteran.  He encouraged students to thank veterans, to listen to their stories and to volunteer at organizations that support veterans.

Christopher Mendolia, chair of the social studies department, was among the faculty who recognized the need for a school wide Veterans Day celebration and who helped organize the event.

“While we don’t personally see thousands of young men and women heading oversees to defend our way of life and our freedom the way we did during WWII and Vietnam, it is essential for us to remember that such people exist,” he told the St. Francis assembly.  “All across this country people enlist and willingly enter war for the sake of defending the rights guaranteed by the Constitution… For this, we owe our servicemen and women as well as our veterans a debt of gratitude that can never be properly repaid.”

Students had an opportunity to speak with veterans who came to the event. Several veterans from World War II and the Vietnam War joined the assembly for the celebration.

Brother Leonard Conway, O.S.F., principal, said the goal of the event was to help students understand the sacrifice of the veterans.

“The aim of the day was to educate the students on the tremendous service have given and are given to our nation to guarantee us our freedom,” he said.

In order to achieve this goal, the social studies department and the language arts department, chaired by Joseph Licata, joined forces for the week surrounding Veterans Day. During social studies classes, students researched veterans organizations such as The Green Beret Foundation, The Wounded Warrior Foundation, and No Greater Sacrifice. During their language classes, students learned about the role of the military in wars that involved the countries whose language they are studying.

Equipped with new knowledge of the armed forces, students had the opportunity to meet women who are preparing to enter the ranks of the military.

The women of the Naval Academy Glee Club, who are only a couple of years older than the St. Francis Prep students, sang an array of patriotic and fun songs.

In between songs, the women also gave their top reasons to join the academy.  They ranged from: “nothing says: ‘I’m ready to party like grade-A military issued black pumps,” to “the military is 80% men, any questions ladies?,” to the opportunity to sing for the president and to travel around the world.

The number one reason on their list was “to have the honor to serve our country.”

To supplement the performance of the larger body of singers, two specialty groups within the club also performed for the students: The Stowaways, named after the only manner in which a woman was allowed on a military boat in past centuries, and The Sirens, named after the beautiful cunning creatures who tricked men to sail to their dooms. 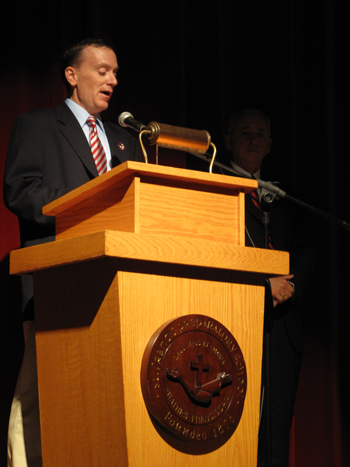 The students responded to the energetic performance with a loud, cheerful, standing ovation. At the end of the program, the women of the Naval Academy answered questions from students of the St. Francis music department.

Buett Beeson, a sophomore in the academy, said one of her favorite parts of being on tour is being able to interact with young people who may be interested in joining the academy.
Beeson said she has the opportunity to travel and sing for students, dignitaries and public officials, thanks to her membership in the Glee Club, which is led by Cindy Bauchspies.

However the membership requires sacrifice. Because students in the academy already have a full and rigid schedule, the glee club is only able to hold practice for an hour and 20 minutes, twice a week. This makes for intense practice time, said Jessica Shapiro, senior.

Shapiro said the pressure is one every singer to keep up with her music. This discipline and dedication could be seen in the club’s performance for the students.