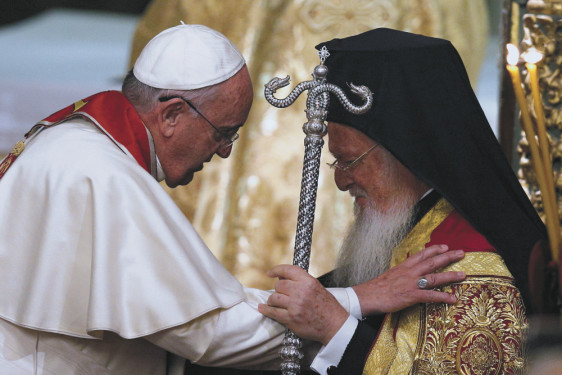 Pope Francis and Ecumenical Patriarch Bartholomew of Constantinople embrace during a prayer service in the patriarchal Church of St. George in Istanbul Nov. 29. 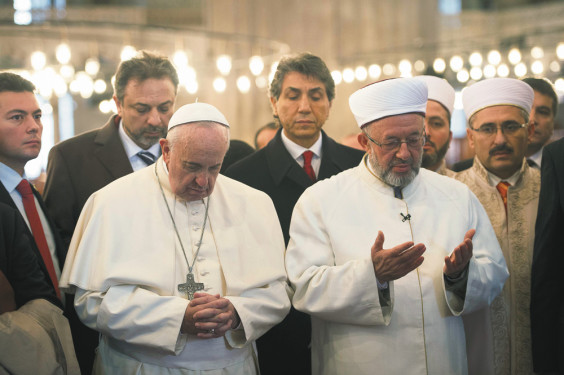 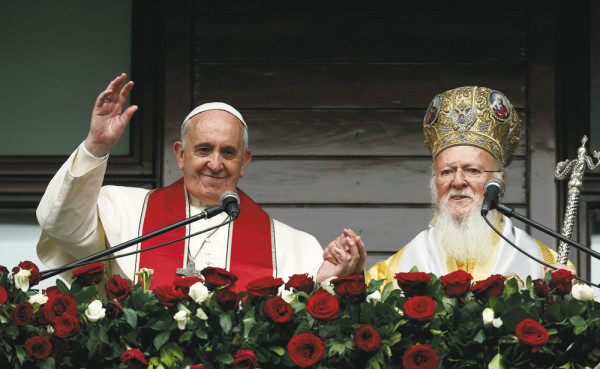 Pope Francis and Ecumenical Patriarch Bartholomew of Constantinople greet a small crowd after delivering a blessing in Istanbul Nov. 30. 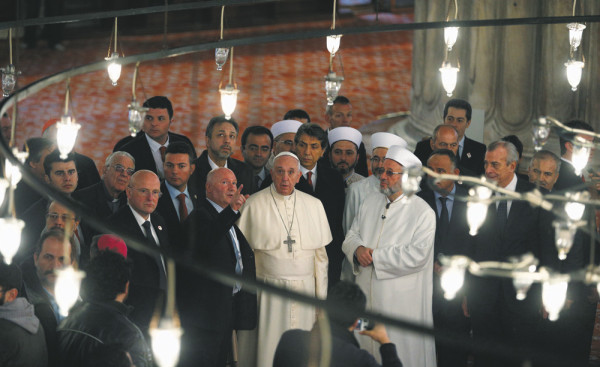 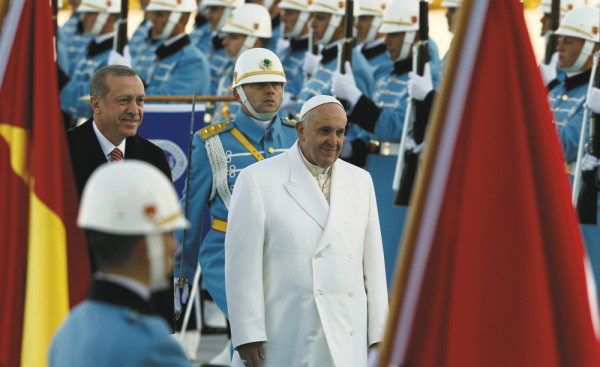 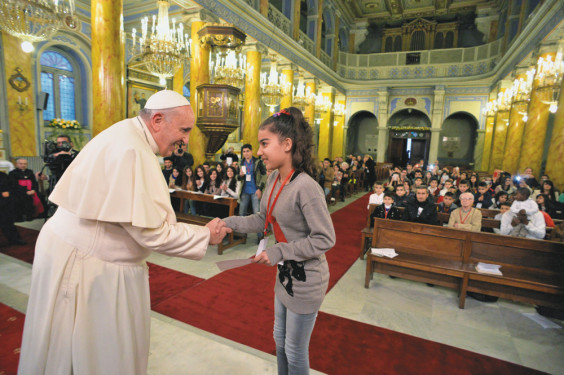 Below, he meets with young refugees from civil wars in Syria and Iraq, a few hours after joining Ecumenical Patriarch Bartholomew of Constantinople to denounce the plight of Christians there. 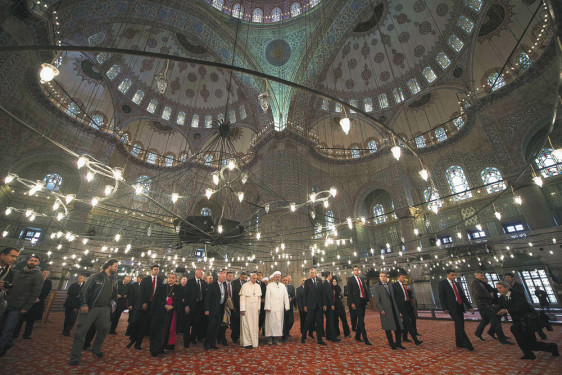 The pope tours the Blue Mosque. 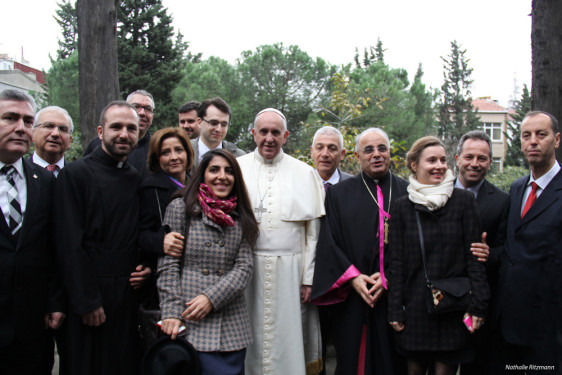 Pope Francis poses in the garden of the apostolic nunciature with Father Francois Yakan, patriarchal vicar of the Chaldean Catholic Church in Turkey, and other members of the Chaldean community of Istanbul. 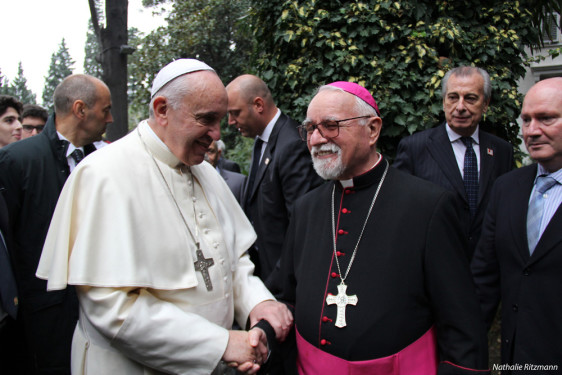 Pope Francis poses in the garden of the apostolic nunciature Nov. 30 with Bishop Louis Pelatre, apostolic administrator of Istanbul.

STANBUL (CNS) – Ankara and Istanbul were gray and cold, at least compared to Rome, during Pope Francis’ Nov. 28-30 visit to Turkey. And the general reception, outside of the pope’s official meetings, was hardly warmer. There were none of the enthusiastic crowds that usually greet him on his trips, no masses waving signs of welcome along his motorcade route or behind police barriers at the stops.

Pope Francis, who seems to thrive on contact with the public, especially with the young, the aged and the infirm, seemed dispirited by the lack of it this time. Despite his relatively light schedule – six speeches over three days, compared to 14 during his three-day visit to the Holy Land in May – he looked attentive but increasingly weary at his public appearances.

There was an obvious reason, unrelated to the pope himself, for the general indifference to his presence. An observer did not need to know that Turkey is 99.8 percent Muslim to see that both cities he visited are dotted with the domes and minarets of countless mosques, miniature versions of the great monuments, Hagia Sofia and the Blue Mosque, that he toured in Istanbul.

Even a brief experience of Christianity’s marginality in that part of world makes it easier to understand why Ecumenical Patriarch Bartholomew of Constantinople, whom Pope Francis traveled to Turkey principally to see, is the papacy’s best friend in the Orthodox Church and an eager participant in ecumenical dialogue.

Although Patriarch Bartholomew is traditionally considered first among equals by Orthodox bishops, his Greek Orthodox flock in Turkey is estimated at no more than 4,000 people, fewer than in many American Catholic parishes. Turkish authorities have kept his church’s only seminary closed for more than 40 years. Just across the border, in Syria and Iraq, Christian minorities are being slaughtered or driven from their homes by militants of the Islamic State.

Under such circumstances, it is no wonder that Patriarch Bartholomew would tell Pope Francis Nov. 30: “We no longer have the luxury of isolated action. The modern persecutors of Christians do not ask which church their victims belong to. The unity that concerns us is regrettably already occurring in certain regions of the world through the blood of martyrdom.”

Rome obviously is a far less lonely place than Istanbul to be a Christian. But Pope Francis follows St. John Paul II and Pope Benedict XVI in recognizing that the West is, increasingly, Christian only in name. His Nov. 25 visit to the European institutions in Strasbourg, France, where he arrived to find the streets practically empty, was a recent reminder of that reality in the Church’s traditional heartland.

The impressions of Christian culture that the Muslim world encounters through globalization are not the work of missionaries. Leaving Turkey’s Presidency of Religious Affairs in Ankara after the pope’s visit there Nov. 28, reporters passed a luxury shopping mall decorated with lighted Christmas trees (reminding an American present that it was Black Friday in the U.S.).

In response to the secularism of Europe and other wealthy societies, Pope Francis has taken a different tack than his two immediate predecessors. The current pope denounces a “throwaway” culture of abortion, euthanasia, unemployment, economic inequality and environmental pollution. But he rarely speaks of secularism, and his teaching focuses less on the failings of contemporary society and more on the Church’s own shortcomings as impediments to evangelization.

While in Turkey, Pope Francis visited with several of the country’s religious and civic leaders.

A day after hearing Turkish leaders demand the West show more respect for Islam, Pope Francis prayed alongside a Muslim cleric inside Istanbul’s most famous mosque.

At the Blue Mosque, Istanbul’s Grand Mufti Rahmi Yaran led Pope Francis to the mosque’s “mihrab,” a niche indicating the direction to the holy city Mecca. He explained that the name is related to that of Jesus’ mother, Mary, who is revered by Muslims.

Then, as the grand mufti continued speaking, the pope fell silent and remained so for several minutes, with head bowed, eyes closed and hands clasped in front of him. A Vatican statement later described this as a “moment of silent adoration.”

The Sultan Ahmed Mosque, an early 17th-century structure, is known as the Blue Mosque for the predominant color of the 21,000 tiles decorating its interior.

The pope’s Nov. 29 visit had been scheduled for later in the morning but was moved up, out of concern that it would interfere with noon prayers.

For Pope Francis, the prayer was only the latest dramatic sign of a desire for closer relations with Islam, including his washing the feet of two Muslims during a Holy Thursday liturgy in 2013, and his invitation to Muslim and Jewish leaders to pray for peace in the Vatican Gardens the following year.

After his arrival in Turkey Nov. 28, Turkish President Recep Tayyip Erdogan raised the issue of prejudice and intolerance against Muslims in other countries, saying that “Islamophobia is a serious and rapidly rising problem in the West” and lamenting that “attempts to identify Islam with terrorism hurt millions.”

Later, during a visit to the Presidency of Religious Affairs, its president, Mehmet Gormez, decried what he called the “dissemination of terror scenarios by the global media through anti-Muslim expressions, which is a form of racism and which has now turned into a crime of hatred.”

After visiting the Blue Mosque, Pope Francis walked to the nearby Hagia Sofia, a sixth-century basilica converted into a mosque after the Ottoman conquest in 1453, then turned into a museum in the 20th century. The interior decoration today includes gigantic calligraphy of Quranic verses as well as medieval mosaics of Jesus and Mary. As the pope toured the museum, it was filled with the sound of the noon call to prayer from the minaret of a nearby mosque.

In the afternoon, Pope Francis celebrated Mass at Istanbul’s 19th-century Catholic cathedral, which ordinarily holds fewer than 600 people, but was filled to overflowing for the Mass. It was the first event during his visit to Turkey – a country whose population is less than 0.2 percent Christian – that recalled the enthusiastic crowds who ordinarily greet him on his travels.

The congregation included Catholics of the Armenian, Syriac, Chaldean and Latin rites and prayers in several languages, including Turkish, Aramaic and English. The varied music included African drumming.

Pope Francis’ homily, which acknowledged the presence of several Orthodox and Protestant leaders, focused on the challenge of Christian unity, which he distinguished from mere uniformity.

“When we try to create unity through our own human designs, we end up with uniformity and homogenization. If we let ourselves be led by the Spirit, however, richness, variety and diversity will never create conflict, because the Spirit spurs us to experience variety in the communion of the church,” he said.

The pope’s last public event of the day was an evening prayer service with Ecumenical Patriarch Bartholomew at the patriarchal Church of St. George. The service was a kind of prelude to a liturgy planned for the next day in the same church.

Like his predecessors Blessed Paul VI, St. John Paul II and retired Pope Benedict XVI, Pope Francis timed his visit to Turkey to include Nov. 30, the feast of St. Andrew, patron saint of the Ecumenical Patriarchate of Constantinople, in what is today Istanbul. As it was for the earlier popes, his primary reason for visiting was to strengthen ties with the ecumenical patriarch, considered first among equals by Orthodox bishops.

A 1964 meeting between Blessed Paul and Ecumenical Patriarch Athenagoras opened the modern period of ecumenical dialogue by lifting mutual excommunications that started the East-West schism in 1054.

Pope Francis already has a strong relationship with Patriarch Bartholomew, having met with him both at the Vatican and in Jerusalem. At the prayer service, the two prayed the Our Father together in Latin, then each offered a separate blessing, respectively in Latin and Greek.

In a brief address, Patriarch Bartholomew noted that the church contains relics of St. Gregory the Theologian and St. John Chrysostom, taken by crusaders during the 1204 sack of Constantinople and returned eight centuries later by St. John Paul II.

“May these holy fathers, on whose teaching our common faith of the first millennium was founded, intercede for us to the Lord so that we rediscover the full union of our churches, thereby fulfilling his divine will in crucial times for humanity and the world,” the patriarch said.

At the end of the service, in a typically spontaneous gesture, the pope asked the patriarch to bless him and the church of Rome.