With Halloween upon us, just think of the new Catholic high school football setup as “football in disguise!”

The CHSFL is normally in full swing by this time of year, yet things remain far from normal. While some high school sports received the green light to begin competition, the state approved only football practices to begin on Sept. 21, with a full return slated for March 2021.

The league got together, and with the blessing of school principals and athletic directors, the CHSFL agreed to sponsor a five-game 7-on-7 football schedule — meaning football would no longer be a close-contact sport.

The rules are slightly different than a regular 11-on-11 game. Instead of tackle, the game is one-hand touch, and players must contact their opponent from the chin to the knee. No diving is allowed.

The center is the only lineman, while the other six student-athletes are all skill position players. This setup allows both the offense and defense to hone their skills in preparation for the spring season.

Meanwhile, the rest of the linemen are able to compete in combine-style drills to create a friendly competition between the schools.

The 7-on-7 drill is a familiar one for these high schoolers during a normal spring and summer in anticipation of the typical fall season. So right now, the teams are simply going through their regular spring motions, just in the fall.

“We are familiar with this format; the 7-on-7 format is not new to us since we’ve been doing this for a while,” said Christ the King H.S., Middle Village, head varsity football coach Jay Brown. “I think it would be a great thing for New York to continue.”

“To use a high schooler’s terminology, we hit the pause button, and now we’re back to where we left off in March when we went to quarantine,” said St. Francis Prep, Fresh Meadows, head varsity coach Rich Carroll. “That’s where we’re at.” 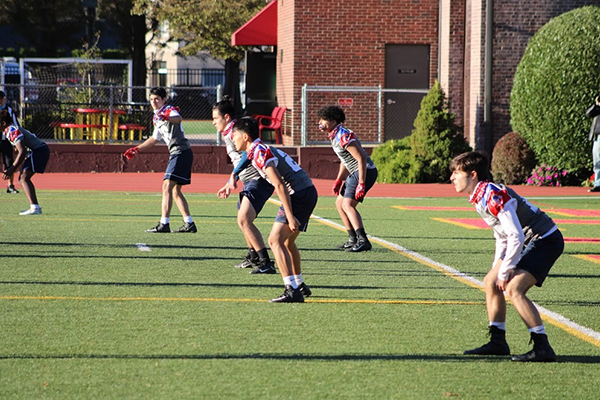 The safety of the student-athletes is of course a major concern. Schools are not providing transportation to and from practices and games, and some teams are taking players’ temperatures right when they arrive at the field. Since the high schools are still on a hybrid learning schedule, some players arrive at the school for practice after completing their school day virtually.

“Even administrators are saying they can’t believe so many kids are coming here when they’re not even in school,” said Holy Cross H.S., Flushing, head varsity coach Tim Smith. “The enthusiasm has been unbelievable.”

During a typical fall football season, the seniors get plenty of highlight video clips to send to colleges. With that in mind, all the 7-on-7 games this fall are being filmed for recruitment purposes. The coaches agree that wins and losses don’t really matter much this fall. More importantly, the altered league has allowed student-athletes the chance to compete after months of sitting in their homes due to the pandemic.

“I can speak for the whole team: We’re loving being out there practicing with each other and building bonds with the juniors who are now first-year varsity players,” said St. Francis Prep senior running back/corner back Nick DeStefano.

“It’s awesome to go out there and compete with your teammates and get better every week. We’re very grateful for having this.”

“It’s been fun,” said Holy Cross senior quarterback Joshua Bagwell. “It’s a good feeling to be on that field. It gives me a better opportunity to read defenses and builds my knowledge on different coverages.” March will be here before we know it, so these CHSFL teams will continue putting in the time to prepare for the — hopefully “regular” — regular season. Though fall is usually synonymous with football, pushing the season to the spring keeps the safety of the student-athletes, coaches and fans as the top priority.

Either way, it’s just great to see that in some way, shape or form, football in the Diocese of Brooklyn is back.