Unconscious, unstable and not breathing was a young man after his family found him attempting to end his own life. His family started CPR and dialed 911 to save what would have been a life span just shy of 22 birthday candles.

Arriving on the scene was FDNY paramedic Jennifer Bravo and her team. They continued with CPR, started medication and intubated him so that he could breathe again.

“I was like ‘he has a pulse, his vital sounds are good, he has blood pressure, he has a heart rate,’” Bravo said as she recalled the scene of the incident.

For Bravo, who is around the same age as the young man, those life-saving moments remind her why she focused her educational goals on a path that would lead her into becoming a healthcare professional.

“This is exactly what I want to do,” Bravo said confidently. “I love being able to make at least some sort of difference in people’s lives.”

For the past two years, countless callers on the other end of emergency 911 phone calls were placing their trust in a stranger who, at one time, didn’t know a word of English.

That’s because, up until the age of six, Bravo grew up in Mexico. She came to the U.S. with her parents, settling in Queens. For her and her family, New York City is home.

“Growing up, you start seeing the differences, the obstacles you got to go through,” said Bravo. “My parents are hard-working people. They do everything they can to better the family.”

As one of the recipients of the Deferred Action for Childhood Arrivals (DACA) program, she is still an undocumented immigrant protected from deportation by the legislative program that was originally enacted in 2012. DACA requires eligible immigrant youth who came to the U.S. when they were children to meet several educational guidelines in order to have the authorization to work in the country.

But 10 state attorneys general will head into federal court to challenge the legality of the DACA program if the Trump administration does not revoke it and stop approving new applications to the national program by Sept. 5.

“Where am I going to go?” Bravo asked. “I don’t know how to proceed because I don’t know what could happen.”

In New York State, more than 73,000 DACA applications have been received by the Dept. of Homeland Security, according to the U.S. Citizenship and Immigration Services, and more than 85 percent of the applicants were approved. Which could mean that after five years since the legislation was initiated, Bravo and the nearly 800,000 unauthorized immigrants from around the country who are also beneficiaries of the program, could witness the extinction of a law that affords them the opportunity to work, pay for tuition and go to college.

Individuals eligible to apply for DACA are students or workers, with 25 percent of the national total juggling both college studies and work in order to afford college.

Such was the case for Carlos Cusco, who came with his family from Ecuador when he was in eighth grade. As a DACA recipient, he works with his father while attending Queensborough Community College, in hopes of one-day working in pharmacy. 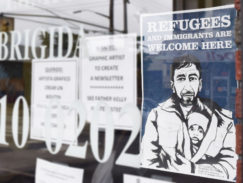 Because of a family member’s advice, he visited the immigration service center associated with St. Brigid’s Church in Bushwick.

He was fully aware of the looming Sept. 5 deadline.

“If it gets cancelled, it will be a loss for a lot of people,” Cusco said.

Msgr. James J. Kelly, pastor emeritus at St. Brigid’s, lawyer and director of the Immigration Center, normally sees 50–60 clients a day in his office, which has an open-door policy, offering its services regardless of color or creed. He and his colleagues at the center have been processing DACA renewal applications. The cost that an unauthorized immigrant must pay in order to renew his or her DACA application is about the same as a new tablet, laptop or 34-inch flat screen television.

“It has been a wonderful program for those young people who came here under 16, not voluntarily, they just arrived here,” Msgr. Kelly said. “If they came as children, there is no problem. It’s very good because it helps encourage them to complete high school, go on to college. They don’t get full scholarships, but they can get into college, trade school, and they are going to pay taxes if they continue their careers.”

Growing up in America is the backstory for Bravo, who has been a parishioner at Presentation of Blessed Virgin Mary, Jamaica, since she was a young teen. She received her First Communion and Confirmation at the Queens parish and eventually attained her associate’s degree in New York. Even though growing up in the Big Apple takes precedence in her childhood memories, she was hesitant to board a plane for the first time in her life when she wanted to attend World Youth Day (WYD) last summer.

“Even that was a different approach,” said the WYD Poland attendee. “Document wise, I wasn’t even sure if I was able to get approved. Luckily, I was approved. It was a little bit hard going through customs. I was held back because they had to do more questions.”

With the deadline in the nation’s capital looming, a representative from Catholic Migration Services (CMS) tells DACA clients not to listen to rumors and to keep applying.

“It’s obviously pretty scary to apply for something when nobody knows that you’re here or the government doesn’t have your name and address,” said managing attorney Shavone Schwartz-Kaufman. “It doesn’t help us as a society to keep an underclass and keep people out of our systems here. We’re talking about children and young adults.”

CMS is calling for supporters to stand in solidarity.

As for the young immigrant woman who says she wouldn’t be able to have the job at the FDNY, travel or experience life without DACA, she maintains her peace through a positive mindset, in hopes that a pathway to full citizenship is in her future.

“I kind of see the positive things in it and just take it as ‘the harder things are to achieve, the better you savor them, the better you enjoy them,’” said Bravo, who was taking a quick break from phone calls at the office in order to finish her interview. “When you finally accomplish something, you’re like ‘okay.’ I see it in the positive way, like savoring things that are a little bit harder to achieve.”

For more information about St. Brigid’s Immigration Center and its services, call 929-210-0202.