Most Holy Redeemer Catholic Academy in Flushing is starting the school year with an $86,000 new media center thanks to the efforts of the Catholic Telemedia Network (CTN).

CTN, the original television effort of the Diocese of Brooklyn, celebrated its 50th anniversary April 18, and wanted to commemorate the occasion by making a real difference for a Catholic school in the diocese, said Gina Krainchich, the director of educational media services for CTN. 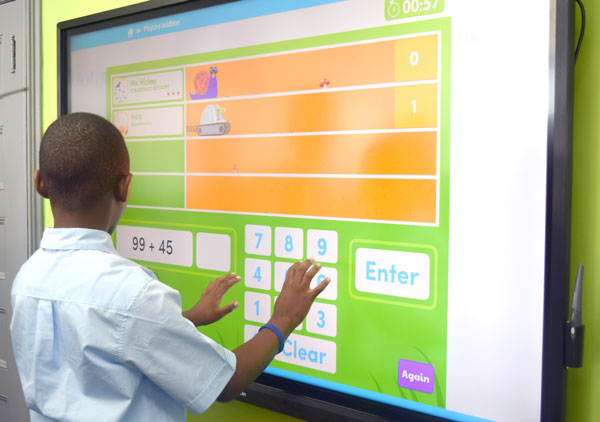 “The capabilities of technology are so often underestimated,” said Art Dignam, CEO of DeSales Media Group at the blessing ceremony of the new lab. “Technology is something you have to respect in order to get the maximum out of it.”

He said technology can be used to grow personally, spiritually and academically. Msgr. Kieran Harrington, chair of the board of DeSales Media Group echoed his sentiments. He explained that technology is a powerful tool to learn about God, not only in religion class, but also by understanding the world He created through English, science, math and every other academic subject.

Originally, CTN paved the way for New Evangelization Television (NET-TV). Today, both groups, along with The Tablet and all diocesan mass-media communications are under the auspice of DeSales Media Group. Although CTN started out as a way to get educational content into the diocese’s Catholic schools through television, the organization has now transitioned into providing all its content online. Therefore for students to be able to utilize the many programs available to them courtesy of CTN, they need technology that can connect them to the Internet.

The new media lab at Most Holy Redeemer has a full set of laptops and a large touch screen at the front of the classroom. The classroom itself has been remodeled to stimulate learning, replacing dark walls with bright colors and incorporating furniture best suited for learning in front of laptops.

Maureen Rogone, principal, said she is grateful for the donation to the school, which nicely complements the SMART Boards in the classrooms.

“You’ve got to be updated technologically to be competitive and to make the students competitive as global citizens,” she said.

It was the academy’s technology teacher, Erick Wong, who qualified the school for the CTN raffle. He completed a web quest about CTN.

But he is thankful that he did, he said. The school has relied on donated technology for its media labs, which tended to be outdated, Wong said.

Now the students have fast, powerful computers available to them, said Fidel Sciortino, head of the information technology department of DeSales Media.

“Challenge. That’s the key,” he told the students at the blessing. “Challenge your teachers. Ask what’s new, what’s next.”

Wong said he has already started teaching the schools eight graders programing with Python, and hopes to expand his efforts to the other grades. He said coding will soon be a skill required to be competitive in the job market.

Father Edward Kachurka, pastor of Mary’s Nativity-St. Ann parish, Flushing, said this technology is an incredible equalizer for the students at the academy, some of whom do not have access to reliable technology at home.

Dignam encouraged the students to remember and cherish the positive feelings of that day and their entire experience at their school. So that, they, like their technology teacher who came back to his alma mater to teach, will never forget their school. 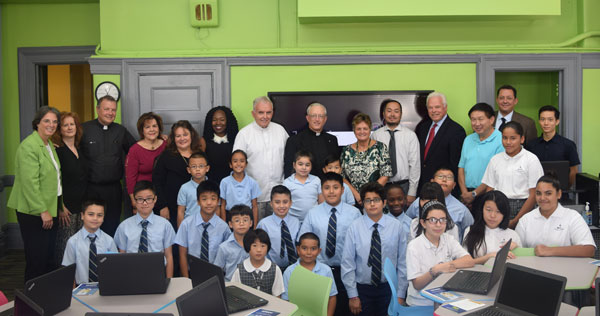