Nearly 50 years ago, St. Clare parish was on the cusp of a cultural and ethnic transition when the original settlers in the area moved out while an influx of new settlers from the Caribbean islands moved in. Fast forward to 2019 and a thriving community of Catholics from an array of Afro-Caribbean backgrounds hold steadfast to the unifying thread of their cultural upbringing: their faith.

One humble hero also took up the call to evangelize and spread the Gospel’s message in particularly to the youth at the Queens parish. His name is Peter Damour. At the brink of 21 years old, the first-generation Haitian-American selflessly dedicated the past seven years of his life invested in the lives of the young Church, even when more than half of that time, he was just a youth himself.

During a recent trip to the diocesan offices in Park Slope, Damour and another youth leader from his parish took a quick break at a local cafe before their usual call time on Friday evenings when the youth group meets at the parish.

When asked where his innate desire to lead and serve the Church comes from, the young man with the calm demeanor ponders for a moment then recalled a conversation he had with his pastor, Father Andy Struzzieri. His response was a verse in Haitian Creole – “A la yon bèl mèvèy, nou paka konprann li men kwè.”

“It’s actually sometimes good that we don’t know,” he said. “Our faith doesn’t call us to know everything. There’s a saying in Creole that I always say at the Memorial Acclamation. What a beautiful miracle this is, we can’t understand it, but we believe.”

Damour recited the part of Mass when transubstantiation takes place, or when the priest says “the mystery of faith” which Catholics believe transforms the bread and wine into Jesus Christ’s body and blood.

For the Brooklyn-born young gentleman who attended Mass every Sunday with his family at St. Theresa of Avila in Prospect Heights until they moved to Queens when he was 12 years old, the youth whom he ministers to can speak on behalf of his calling.

“He’s someone that means a lot to me and I love him with all my heart,” said Briana Turin, a sophomore at Forest Hills H.S. in Queens. “I was a very troubled child, depressed child and I didn’t know what was going on with me. I felt like I was just about to break and I met Peter and after a while I thought ‘ok he’s not bad.’ He’s just always there for me no matter what.”

Although Turin was first forced to join the youth group by her mom, three years down the line, she doesn’t regret joining because of the way the ministry has changed her life.

For Matthew Campbell, he said he loves being a part of the youth group.

“Peter has really shaped me to become a young man,” said Campbell. “He’s helped me with a lot of situations I’ve had in the past. I’ve seen him help other kids as well and it’s like I want to help people like that when I get older. He’s had a really big impact on me.”

The freshman from Valley Stream Central H.S. in Long Island helps Peter with Sunday school at the parish and also plays the saxophone at church. Being Catholic at a public school is a challenge Campbell embraces thanks to the encouragement he receives from the youth group.

“Some challenges are that a lot of people don’t believe what you believe,” he added.

“I believe in Jesus Christ. Peter has helped me embrace it. I embrace my faith.”

Given the demanding responsibilities Damour oversees on a daily basis all the while working on his bachelor’s degree in secondary education with a focus on U.S. History, whether or not he realizes just how much he affects his youth in a positive way, he understands the main task at hand.

“…You get to bring Christ to them and Christ is in everyone,” he said. “He’s not only at Mass. He’s in you and me.” 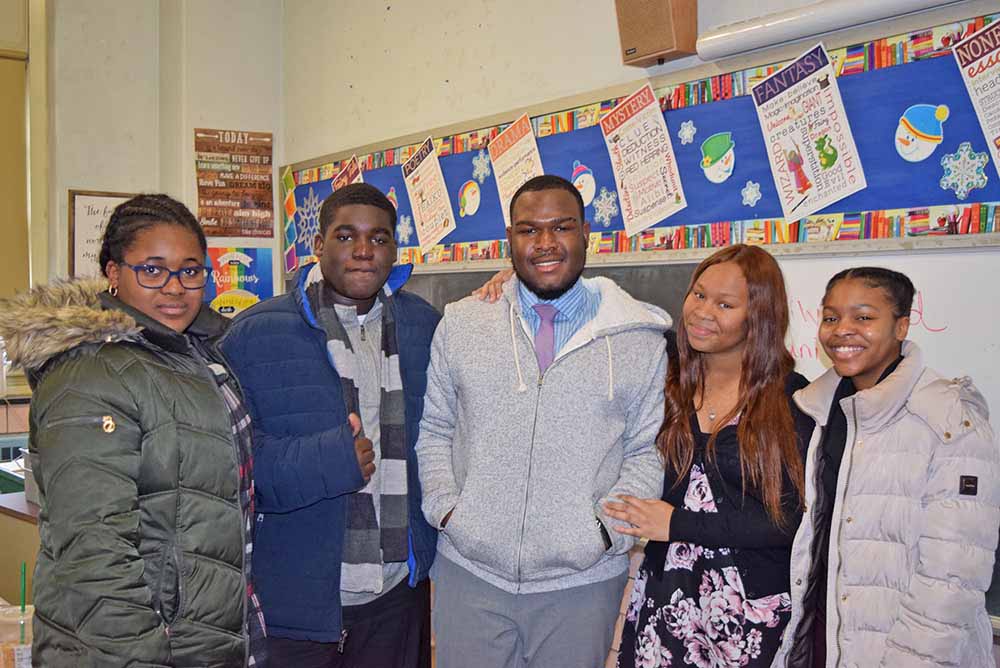 The Catholic Youth Ministry Initiative helps Damour in his ministry by providing financial and spiritual support.

“By ensuring finances and ensuring people and resources for us, it has truly impacted the life of the Church in a newer way,” said Damour.

Less than a week before Damour visited the diocesan headquarters, he taught the eighth grade Sunday school class at St. Clare’s. The students were discussing different religious sisters as part of Women’s History Month.

On a rainy Sunday afternoon, a classroom in Queens read out loud the lives of light shed on the world by the women who lost their lives as missionaries in El Salvador.

Eyes were wide open as they remembered the Maryknoll sister born in the Bronx who was brutally murdered by a military death squad in El Salvador – Sister Maura Clarke, M.M.; or the Ursuline sister from Ohio whose life, like Sister Maura, ended in rape and brutality in El Salvador – Sister Dorothy Kazel, O.S.U.; or lay missionary Jean Donovan, born in Connecticut, who died as a martyr at the age of 27.

As the hour-long class was dismissed, the topics that Damour and his youth covered were in-depth, thorough and rooted on the Church’s teachings.

The students were briefed upon Lenten regulations, social justice warriors and even more complex conversations.

One student confidently asked the youth minister why women couldn’t become priests. Again, with his cool and calm demeanor, he referenced Jesus’ ministry and also humbly asked the student if he could get a pastoral, albeit theological response from the church pastor.

How Damour runs his ministry is not a mystery. He welcomes the youth for who they are and meets them exactly as they are – as the inquisitive, eager and curious young Church who are seeking God in their life.