The COVID-19 pandemic has allowed us to appreciate the hallowed sports tradition of the past in the Diocese of Brooklyn.

Let’s remember the great Walter Rooney, who worked his way from the basketball courts and baseball fields of Brooklyn to establishing himself as one of the most respected referees in the NBA.

Born on Feb. 24, 1927 on Seeley Street, Rooney attended the parish and grammar school at Holy Name of Jesus, Windsor Terrace. He was the sixth of seven children to Edward and Anna Rooney.

When he wasn’t attending Brooklyn Dodgers games at Ebbets Field, he played baseball and basketball religiously — so much so that he was noticed by the legendary coach Herb Hess of St. John’s Prep, Downtown Brooklyn. After a tryout, Hess offered Rooney an athletic scholarship.

Later that same year on the baseball diamond, Rooney was the ace pitcher for the St. John’s Prep team that captured the second of consecutive Brooklyn CHSAA titles. That season, he threw a no-hitter against St. Francis Prep, Williamsburg, while striking out 13 opposing hitters in a 1-0 shutout.

Though the Brooklyn Dodgers and Chicago Cubs showed interest in his pitching talents, Rooney served in the U.S. Army near the end of World War II after his high school graduation. When he returned, he attended Niagara University, Lewiston, N.Y., where he played both basketball and baseball.

His 23-0 undefeated hoops season as a high school senior was a harbinger of things to come. As a senior in college, Rooney also coached the freshman basketball team, and sure enough, that team finished its season 23-0.

Coaching piqued Rooney’s interest to become an educator. When Holy Cross H.S. opened in Flushing, he was named a teacher and the school’s first-ever basketball coach.

After a year there, he began coaching at St. Agnes Cathedral H.S., Rockville Centre, L.I.

Soon he became the head coach at Valley Stream South H.S. He received a master’s degree in education from Columbia University, Manhattan, and went on to a long career as director of guidance and pupil services for the Lynbrook, L.I., school district.

Throughout his coaching career, Rooney also officiated games, starting with freshman scrimmages and Catholic Youth Organization contests. He then moved through the varsity high school and college ranks, working primarily in the Ivy League. 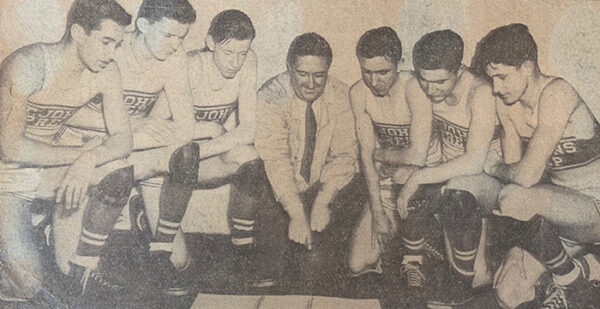 For many years, Rooney turned down opportunities to officiate NBA games, since he wanted to stay close to home and his young family. When the American Basketball Association (ABA) offered him a 60-game schedule instead of the NBA’s 80, he accepted and quickly became one of the top referees in the pro game.

Rooney continued officiating games following the ABA/NBA merger. He was so well respected that he was elected to the executive board of the NBA Referees Union and served one term as its president. He worked countless All-Star and playoff games throughout his storied career.

He was elected to the Niagara University Hall of Fame and the Basketball Old-Timers of America Hall of Fame. In 2018, he was awarded the NBA Spirit Award as voted on by the NBA in conjunction with the league’s 63 active referees.

At the age of 93, Rooney died on Oct. 1, 2019. He was predeceased by his wife Dolores with whom he had four children: Walter Jr., Maureen McDermott, Ed and the late Mary Pat.

We remember the sports legacy Rooney carved out over his many years, and it all started right here in Brooklyn.