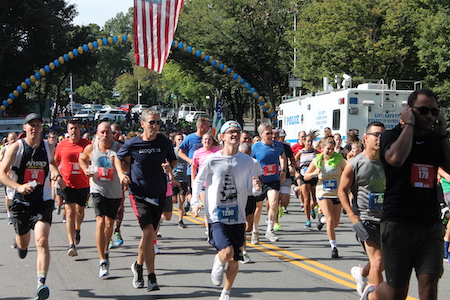 Xaverian H.S., Bay Ridge, will again host the P.O. Christopher Hoban Memorial Run, but this year the run will take place virtually. Runners can participate wherever they are on Sunday, Sept. 20.

Officer Hoban was killed during an undercover narcotics operation buy-and-bust on Oct. 18, 1988. The race is the primary fundraiser for the Hoban Scholarship, a fund organized by Xaverian’s police alumni that provides tuition assistance to sons and daughters of NYPD officers to attend the school.

Ferguson has coached the school’s swim team since 2008, and she will remain in that role. She has also coached lacrosse and soccer for the Hilltoppers. William Rabold will continue as TMLA’s assistant athletic director.

“My rule was I wouldn’t recruit a kid if he had grass in front of his house. That’s not my world. My world is a cracked sidewalk.” – Al McGuire, Naismith Memorial Basketball Hall of Famer

McGuire was born in the Rockaways, attended St. John’s Prep, Williamsburg, starred for the St. John’s University, Jamaica, men’s basketball team and went on to coach hoops for 22 collegiate seasons – most notably at Marquette University, Milwaukee.