Nearly 20,000 people were in the presence of the Holy Father when he headlined Madison Square Garden Friday evening, Sept. 25.

Ticket holders waited hours in line and had to clear security before entering the Midtown Manhattan arena to attend the only papal Mass in New York – a Mass for the Preservation of Peace and Justice.

Ahead of the Mass, attendees enjoyed “Francis Our Pope: A Journey in Faith,” a two-hour program of prayer and religious music, performed by Broadway and recording artists, including Gloria Estefan, Harry Connick Jr. and Jennifer Hudson.

The St. Charles Borromeo Choir, Harlem, opened the program, which included a history of the papacy from Bishop William Murphy of Rockville Centre. Meanwhile priests were stationed on the sixth floor of the arena hearing confessions.

Then Pope Francis surprised the crowd – and some clergy – when he arrived early and quietly entered the arena via a papal golf cart with Cardinal Timothy Dolan. The pontiff circled the floor level, where he blessed the crowd, to the sound of sustained clapping and shouts of “We love you,” in Spanish and English.

“It was awesome,” shared Clendy Calderon, an administrative assistant in the diocesan faith formation office, who attended the Mass with colleagues Christine Georgi and Martha Hernandez.

“Probably in my life I’m not going to have another experience of Mass with the pope so I feel blessed to be here,” Hernandez said. 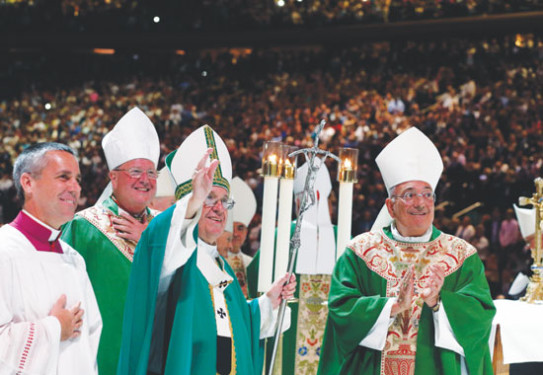 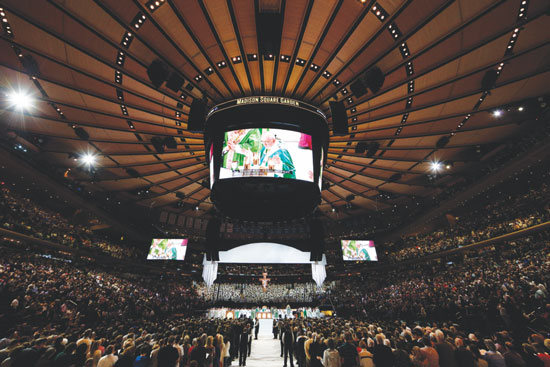 A scene from the ground floor, facing the altar. (Photo by Paul Haring) 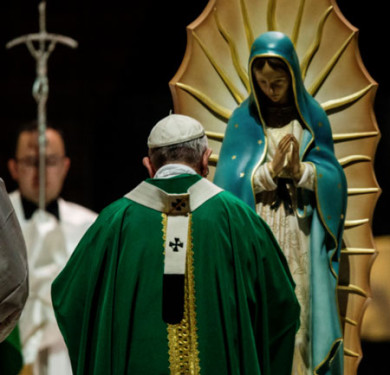 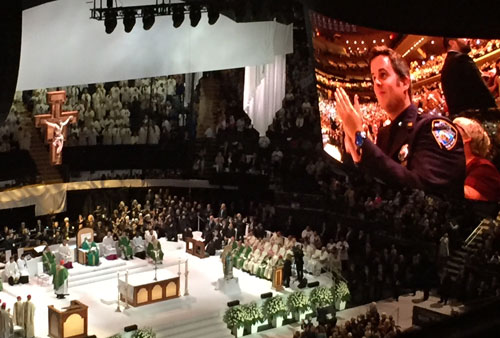 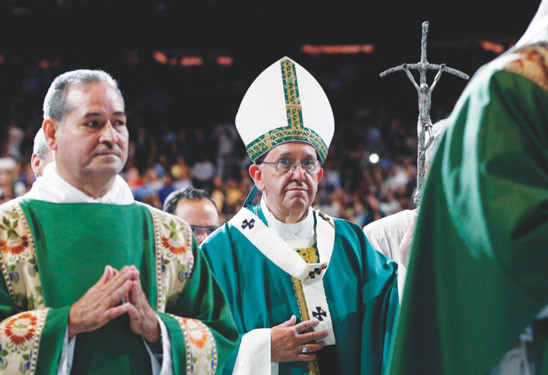 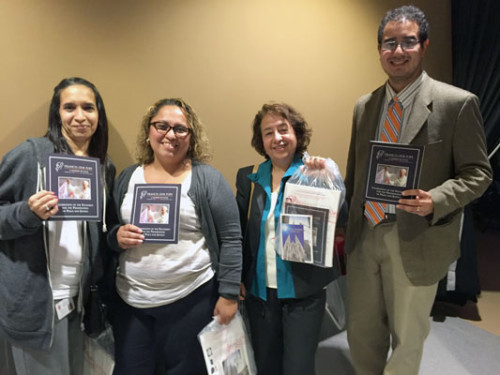 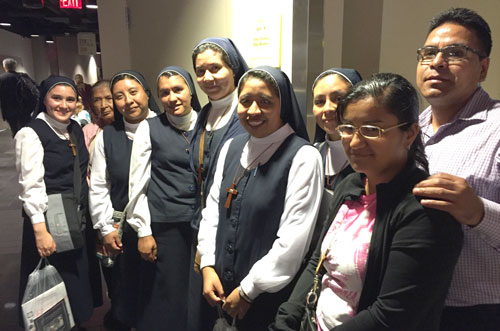 Missionary Sisters Servants of the Word from the Bronx. (Photo by Marie Elena Giossi) 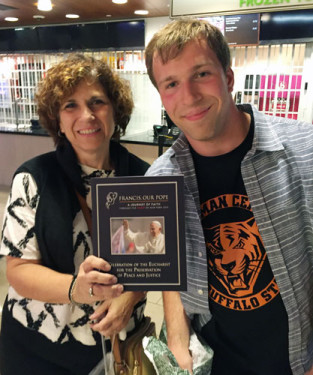 Just as quickly as the crowd erupted into applause, silence fell upon The Garden as Mass began with five cardinals, 33 bishops and hundreds of priests present.

And the Brooklyn Diocese was well represented – on and off the altar.

According to those who helped plan the liturgy, the statue on the altar of Our Lady of Guadalupe came from her namesake parish in Dyker Heights.

The golden candlesticks used at the liturgy traveled from Holy Name of Jesus Church, Park Slope, and 20 chalices that distributed the Precious Blood to priests were from St. Joseph Co-Cathedral, Prospect Heights.

Brooklynites were proud to see Bishop Nicholas DiMarzio serve as a principal concelebrant with Cardinal Dolan. But the bishop wasn’t the only familiar face. His master of ceremonies, Deacon Jaime Varela, was one of four deacons assisting the pope.

Deacon Varela incensed the altar with the pontiff and received the kiss of peace. He was also one of the few to receive Communion from the pope.

“Being next to the Holy Father was a dream come true,” he said. “It was a once-in-a-lifetime experience that I will always cherish. I am so grateful to Bishop DiMarzio for choosing me.”

Father Carlos Velazquez, parochial vicar at St. Sebastian parish, Woodside, was equally moved by the opportunity to be an assistant master of ceremonies. He escorted the lector and petitioners to and from the pulpit.

After Mass, he shook the pope’s hand and conveyed greetings from the people of Woodside.

“Being in the Holy Father’s presence was a grace-filled experience I’ll remember for the rest of my life,” he said. “I’ll be a 90-year-old priest saying, ‘I was at that Mass.’”

This honor was made possible, he explained, through Father Matthew Ernest, director of the New York Archdiocese’s liturgy office, whom Father Velasquez knew as a student at St. Joseph Seminary, Dunwoodie.

All listened intently as the pope delivered his homily in Spanish with English translations provided on giant screens, visible throughout the arena. His words were geared toward those who live in big cities, like New York, and he spoke about witnessing to the light of Christ amid complex challenges, including immigration, homelessness, education and healthcare.

Christian Rada, coordinator of marriage, family and respect life ministry for the Brooklyn Diocese, said he appreciated that the pope “incorporated the immigration issue.”

“Brooklyn is a diocese of immigrants,” Rada said, “but this issue is a national issue too. His words can be applied to any urban diocese so he wasn’t just talking to New York, but to all big cities.”

Following the final blessing, Pope Francis smiled and said in English, “Please, don’t forget to pray for me.”

He will certainly be in the prayers of Karen Mazza from St. Kevin Church, Flushing, who was thrilled to be at the Mass with her son James Toback, and his friends from the Newman Center at Buffalo State College.

Toback said he feels the Church has felt more welcoming under the guidance of Pope Francis. “I think he’s changing things,” he said.