On Veterans Day, we remember the brave men and women who served their country so that others could enjoy their freedom.

So let’s take some time to recognize the sacrifice of 2nd Lt. Peter Chappetto.

Lt. Chappetto is the uncle of Auxiliary Bishop Raymond Chappetto, the pastor of St. Kevin’s parish, Flushing, and a local expert of the Astoria sports scene.

Bishop Chappetto never met his uncle, who died a heroic death during World War II. However, the bishop knows all about his uncle’s legacy on both the battlefield and in sports.

Born in 1913 in Astoria, Peter’s family attended Our Lady of Mount Carmel Church. He went to P.S. 7 for elementary school and William Cullen Bryant H.S., Long Island City. In high school, he played both basketball and baseball from 1929 to 1932 and was a captain on each team for two years.

Nicknamed “Pistol Pete,” Peter was a high-scoring forward on the hoops court and a defensive wizard at third base on the baseball diamond. His 1930 Bryant basketball team won the league championship, and he was an All-Queens basketball choice in 1931 and 1932. He also made the All-Queens baseball team in 1931.

In a Long Island Star Journal article dated Feb. 8, 1947, Peter is described as “one of the most efficient and versatile athletes to come out of Astoria” as well as “one of their greatest athletes in two sports” ever at Bryant H.S.

As the war clouds began gather however, he was among the first from Astoria to enlist in the Army. He joined the ranks 10 months before the Japanese attack on Pearl Harbor on Dec. 7, 1941.

In the fall of 1944, he was commissioned as an armored corps officer and was shipped to the islands of the Pacific. On Sept. 26, 1944, just 17 days after he arrived, Peter’s platoon saw its first combat action after reaching an advanced island base as part of the invasion of Palau during the Battle of Anguar in the Peleliu islands group.

During the battle, his superior was mortally wounded, putting him in charge. He ordered his men to withdraw, while he stayed back until his men were safe. Despite the danger, he directed his platoon’s movement even after he was seriously wounded.

Peter died from his wounds that day. He was just 32 years old. As was customary of the times, he was buried at sea.

According to official word for the War Department received by his parents, Charles and Dora Chappetto, Peter died “when he was hit by a Japanese shell fragment as he maintained his post in an exposed position and directed his men to comparative safety.”

With complete disregard for his personal safety, he ensured that his men would survive. Though that bravery cost him his life, his heroic actions undoubtedly prevented many more casualties.

As a token of their appreciation, 30 members of Peter’s platoon sent a letter to his mother, dated Dec. 22, 1944, as a testimonial to what Peter’s leadership meant to them.

“The reason he is not with us today is because he thought more of the safety of his men than he did of his own,” the letter reads.

Peter was posthumously awarded a Purple Heart, Silver Star and a presidential citation. Just as important to the family though was the dedication of a 1.25-acre park in Astoria in his memory. 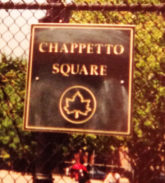 In October 1946, City Council Member Mae Gallis of East Elmhurst introduced a petition to name a playground located near the Triborough Bridge on Hoyt Avenue between 21st and 23rd Streets in honor of the former soldier-athlete, who played baseball there as a youth.

Councilman L. Gary Clemente of Ozone Park created the bill, which was approved soon after. The park was officially dedicated on Nov. 11, 1949.

Peter Chappetto Memorial Square became a neighborhood sports hotspot for the kids of Astoria. From stickball to football to baseball to hockey to soccer, the park – affectionately known as the “Cheesebox” – was one of the most used parks in Queens in the 1950s and 1960s, according to Bishop Chappetto’s brother Richie Chappetto. A rededication ceremony and 50th anniversary reunion was celebrated on Nov. 11, 1999.

Hopefully while there, the local kids took a moment to read the inscription on the flagpole to understand the history of the ground on which they stood: “Dedicated to a great sportsman who loved God and his fellow men and who made the supreme sacrifice for his country.”

In late September, the New York City Community Parks Initiative named Chappetto Memorial Square as one of a number of city parks that would be receiving a major upgrade. A total of $65 million will be split among 11 parks as part of the plan, which is expected to be completed in late 2020 or early 2021.

For years to come, the park will continue to honor the legacy of a natural athlete who portrayed qualities of leadership on the basketball court and baseball diamond.

But more importantly, he emerged as a leader on the battlefield – sacrificing his own life so that others could live.

That is the true definition of a hero, who will be remembered in spirit each time a pick-up game in any sport breaks out among the youth of Astoria at the Cheesebox.

One thought on “Bishop’s Uncle Gave Life for His Country”