MANHATTAN — As Bishop Nicholas DiMarzio refutes an allegation that he sexually abused a minor in the 1970s while he was still a priest in the Archdiocese of Newark, N.J., parishioners and priests in Brooklyn and Queens are voicing their support for the man who has led the diocese since 2003.

“Bishop DiMarzio has been on the forefront of this diocese and in his former Diocese of Camden, as well, where he set up systems to safeguard the security of young people in our parishes,” said Father Anthony Sansone, pastor of Our Lady of the Miraculous Medal Church in Ridgewood.

“Anyone who has done so much in a short period of time in our diocese … I think that’s quite a positive step, which makes this allegation even more shocking,” Sansone told Currents News. “Personally, I think he has been a great spiritual leader and shepherd for our church.”

Fred Hoefferle, a parishioner at Miraculous Medal since 1968, also praised Bishop DiMarzio’s record on fighting abuse and dismissed the allegation as animosity toward the Catholic Church.

“There seems to be a tide in today’s environment where anyone has some malice toward anybody or an organization, all they do is make allegations,” Hoefferle said. “They’re just looking for anything to besmirch people, especially people in power.”

“People should adhere to the premise of our Constitution that you’re innocent until proven guilty, and there’s just no proof whatsoever,” he added.

In a statement sent to the priests of the Diocese of Brooklyn on Nov. 12, Bishop DiMarzio upheld his record as proof of his innocence. “I am just learning of this allegation,” he wrote. “In my nearly 50-year ministry as a priest, I have never engaged in unlawful or inappropriate behavior, and I categorically deny this allegation. I am confident I will be fully vindicated.”

Bishop DiMarzio’s statement comes in response to lawyer Mitchell Garabedian, who has notified the Archdiocese of Newark that he intends to file a civil suit for damages of $20 million next month when New Jersey opens its two-year “look-back” window that will allow sex abuse victims to file lawsuits without regard to a statute of limitations.

According to a report from the Associated Press on Nov. 13, Garabedian’s notice claims that when Bishop DiMarzio was a priest at St. Nicholas Parish in Jersey City he repeatedly abused now 56-year-old Mark Matzek when Matzek was an altar boy at the church and a student at St. Nicholas School. The alleged victim also claims he was abused by a second priest, the late Father Albert Mark.

Archbishop Christophe Pierre, Pope Francis’ representative to the United States, told The Tablet last month that the pope’s decision to appoint Bishop DiMarzio to investigate Bishop Malone was “a sign of trust.” Deacon Phil Franco of Our Lady of Mount Carmel, Williamsburg, said the timing of the allegation is suspicious given Bishop DiMarzio’s recent time in the national spotlight.

“The fact of the matter now that he’s in a position where he may be outing some very legitimate pedophiles and there are many people who would benefit from seeing him discredited. I find the timing very convenient,” said Franco, who himself was abused when he was between the ages of nine and 12 by a man who was preparing to be a priest.

Born in Newark in 1944, Bishop DiMarzio is the grandson of Italian immigrants, and he has long been outspoken in defense of immigrant rights. He has dealt with the abuse scandals since the late 1990s, when he was appointed as bishop of the Diocese of Camden, N.J., where he established an outside phone line to allow potential victims to report abuse directly to the local district attorney, bypassing any involvement by the church. 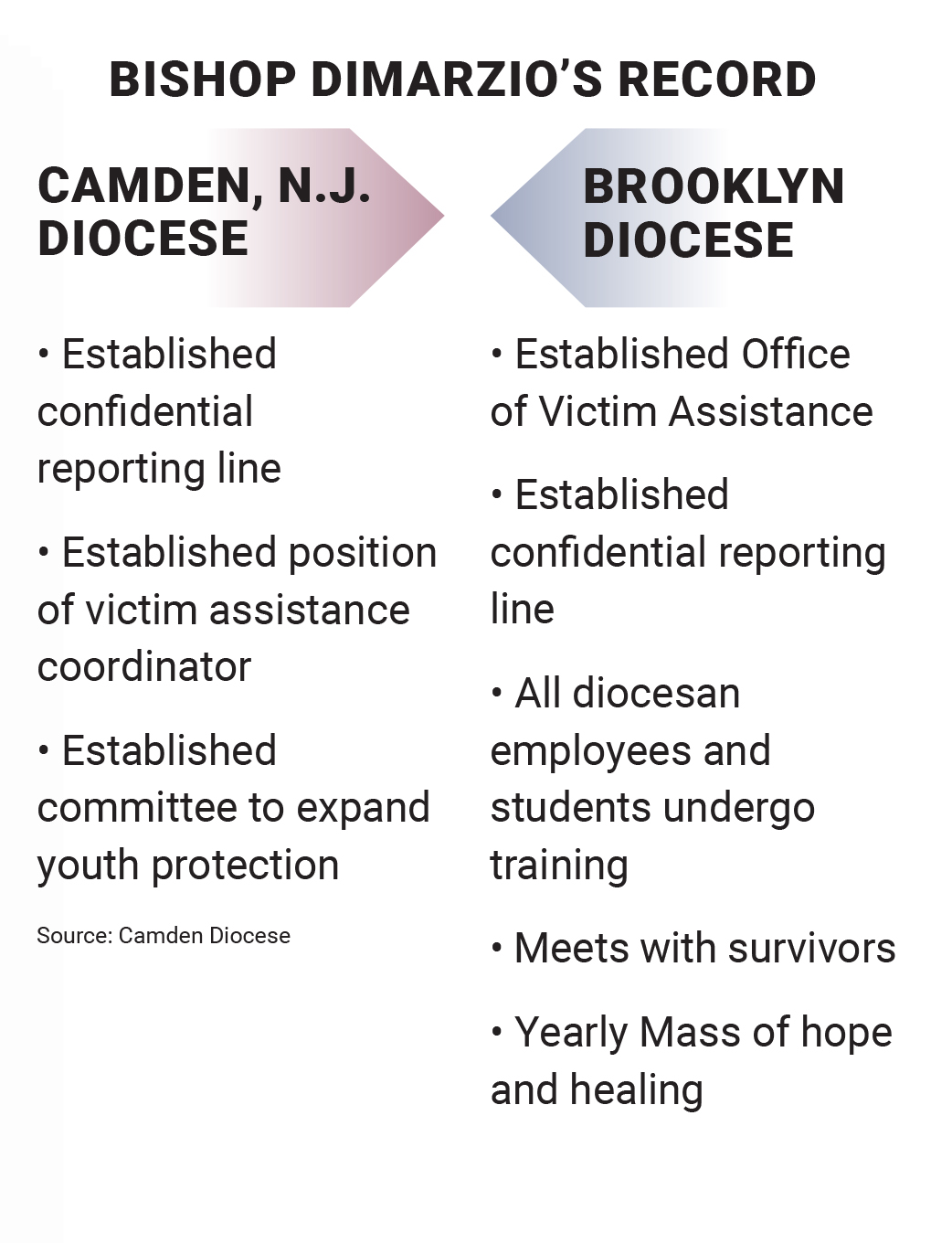 Since 2002, the Brooklyn Diocese has shared all of its files and allegations against priests with the district attorneys of Brooklyn and Queens. In 2004, Bishop DiMarzio established a telephone hotline for anyone to report allegations of sexual abuse by a member of the clergy.

In 2009, Bishop DiMarzio published a presentation that outlined the Diocese of Brooklyn’s efforts to investigate and report abuse and described the diocese’s protocol regarding accountability, reconciliation, prevention and victim assistance. Bishop DiMarzio also celebrates an annual Mass for healing that is planned by victim-survivors.

In February, Bishop DiMarzio authorized the release of the names of 108 priests from the diocese credibly accused of child abuse over the diocese’s 166-year history. The bulk of cases involved priests ordained between 1930 and 1979. The diocese said there have been just two local cases since the U.S church enacted reforms in 2002.

Bishop DiMarzio said at the time he hoped that making the names public would provide a layer of healing for victims “on their journey toward wholeness.” Over the past year, Bishop DiMarzio has held regional meetings throughout the diocese to provide a forum for candid questions about the abuse scandals.

“It is very important that the leadership in our parishes understands this very complex and very difficult issue,” Bishop DiMarzio said at the beginning of a listening session held at St. Thomas Aquinas Church in Flatlands last November.

In an interview with Crux in late September, Bishop DiMarzio said that his conversations with abuse survivors over the years have been “shattering.” “Reconciliation isn’t just putting money in somebody’s pocket,” Bishop DiMarzio said. “It’s an apology on behalf of the church by somebody in authority.”

Along with the rest of the bishops of New York state, Bishop DiMarzio was in Rome last week for ad limina meetings with the Roman Curia, as well as an audience with Pope Francis. Bishop DiMarzio has since returned home to the diocese, where parishioners on Nov. 17 continued to process news of the shocking allegations.

Laura Caccavale, a parishioner of Our Lady of Mount Carmel, said that while she was “initially upset,” she believes “if  he is innocent, his innocence will be proven,” adding that politics and money seem to be motivating the charges.

“It didn’t deter me from wanting to still come to church as well as pray for him and everyone involved in that sort of situation,” she added. “God is the one that I’m here for.”

(News of the allegation against Bishop DiMarzio came out after the Nov. 16 issue of The Tablet went to press. The Nov. 23 edition of The Tablet has full coverage.) 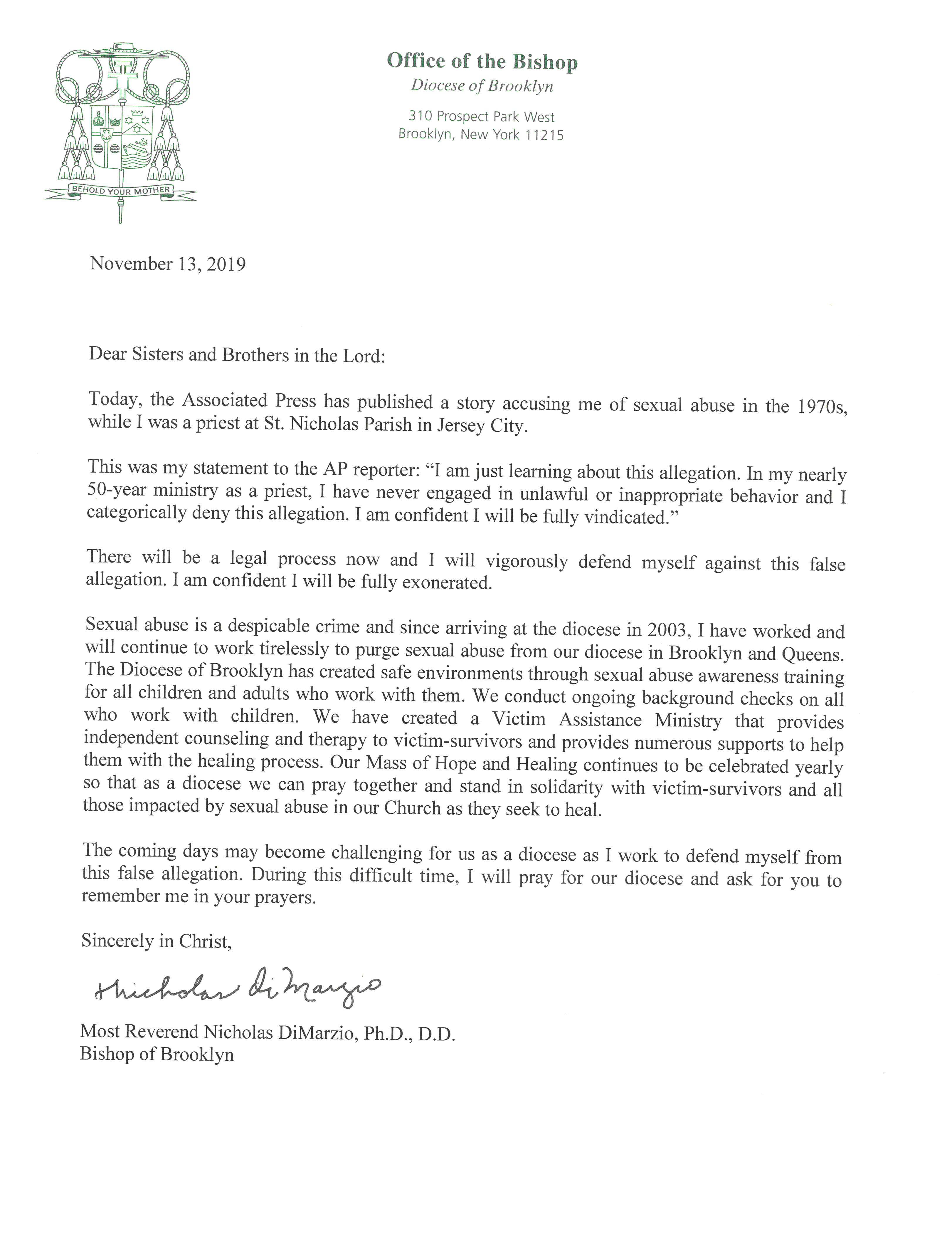 4 thoughts on “Bishop DiMarzio Vows Fight, Says He Will Be Vindicated”