WINDSOR TERRACE — The Archdiocese of New York expressed support for the federal lawsuit the Diocese of Brooklyn filed against Gov. Andrew Cuomo over his strict new COVID-19 rules on church attendance.

The Archdiocese released a statement on Oct. 8, the same day the diocese filed its lawsuit.

“The Diocese of Brooklyn’s lawsuit seeks to defend their First Amendment right to continue to safely worship and operate their parishes, and we support the Diocese of Brooklyn in their effort,” Joseph Zwilling, director of communications for the archdiocese, said in the statement.

“Catholic parishes throughout the Archdiocese of New York — indeed, throughout the entire State — have been able to safely and successfully re-open for Mass and the sacraments, thanks to careful planning, strict adherence to safety guidelines, and the full cooperation of our clergy, parishioners, and parish staffs,”  Zwilling stated. “So, it is unfair to arbitrarily close, even temporarily, churches which have been operating without a spike in coronavirus cases simply because other institutions have not yet been able to do so.”

Click here to read the statement from the Archdiocese of New York. 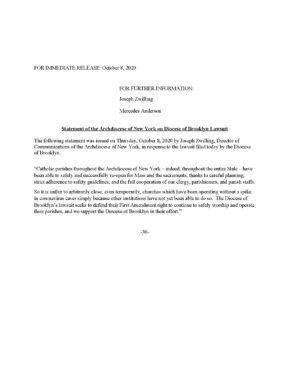 The Diocese of Brooklyn filed the lawsuit in federal court against Cuomo, in his official capacity as governor, and is seeking an injunction to prevent him from enforcing new rules prohibiting more than a handful of people from taking part in religious services in the zones that are designated by the state as COVID-19 hot spots.

In its lawsuit, the diocese charged that the restrictions imposed by Cuomo through his New Cluster Action Initiative violate First Amendment rights. The governor announced his initiative on Oct. 6. He placed restrictions on attendance at religious services at all houses of worship in COVID-19 hot spots.

“The executive orders this week have left us with no other option than to go to court,” Bishop Nicholas DiMarzio said in a statement. “The state has completely disregarded the fact that our safety protocols have worked, and it is an insult to once again penalize all those who have made the safe return to church work.”

Leaders of the Orthodox Jewish community have also filed suit against the state to seek to overturn the new restrictions. The suit has been brought by the organization Agudath Israel of America in partnership with other groups. Borough Park, a predominantly Orthodox Jewish community in Brooklyn, has been the scene of nightly demonstrations this week by protesters objecting to the new restrictions.

Rich Azzopardi, a senior advisor to the governor, issued a statement in response to the lawsuits: “We’ve been sued virtually every day for every action taken. We’re concentrating on reducing the virus in these hot spots and saving lives, period.”