Simply stated, without priests, there is no Eucharist, and without the Eucharist, there is no Church. So on the same day the Catholic Church celebrated the feast day of St. John Vianney, the patron saint for diocesan priests, seminarians from the Cathedral House of Formation in Douglaston, celebrated a special Mass and barbecue with Bishop Nicholas DiMarzio as the diocese officially opened its Year of Vocations.

Bishop DiMarzio, who maintains close relationships with men who will be ordained for the diocese, spoke to the families gathered at the Immaculate Conception Center’s chapel.

“Thank you for encouraging your sons to pursue a vocation to the priesthood. I know this is not easy,” said Bishop DiMarzio during his homily.

“The theme we’ve chosen for this year of vocations, we hear through Jesus’ own words to send laborers to the harvest because the laborers are few. We are making this a year of prayer for many activities that we will begin in order to foster and encourage vocations, but basically it’s a year of prayer.”

Providing support were the Knights of Columbus, who sponsored small statutes of St. John Vianney for the seminarians as a token of their appreciation.

“We just purchased 50 statues to welcome and encourage the seminarians to continue their vocation toward the altar of Christ,” said Louis Pepe, chairman of the Knights’ Long Island Chapter of Brooklyn and Queens, “and to let them know that there are people rooting and praying for them, for their successful road to the priesthood. We want to thank them for saying ‘yes’ to God.”

Pepe, who attends Sacred Hearts-St. Stephen parish, Carroll Gardens, made sure to attend the festivities alongside fellow Knights, including the chairman of the Queens County conference Luther McNeal; vice-chairman of the Long Island Chapter, Peter Weidner; and former Grand Knight Joe Falce, whose son is in his third year of theology.

Seminarian Michael Falce said that he fell in love with Cathedral Prep Seminary because he could go to daily Mass and participate in other spiritual experiences that he found fulfilling.

Falce said that his parents “were open to the idea because I was happy and that it was something I really wanted to do.”

Growing up in St. Pancras parish, Glendale, his pastor at the time asked him if he wanted to be a priest when he was in the seventh grade.

“I was grateful to the priests in my home parish that really encouraged me to take a look at Cathedral Prep,” he said.

His mother and father were overjoyed to see their son fulfilling his vocation.

“I have a special bond with my son and I just feel very blessed and I’m very happy for him because as a mom the only thing you really want for any of your children is for them to be happy,” said Maryann Falce, “and this is something he has always wanted to do and I am 100 percent behind him.”

Michael’s father, a past Grand Knight with Msgr. Sherman Council, Joe Falce says he wants to stay connected to his son and his faith allows him to do that. 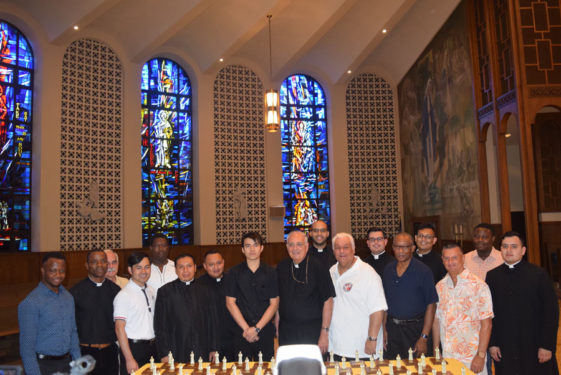 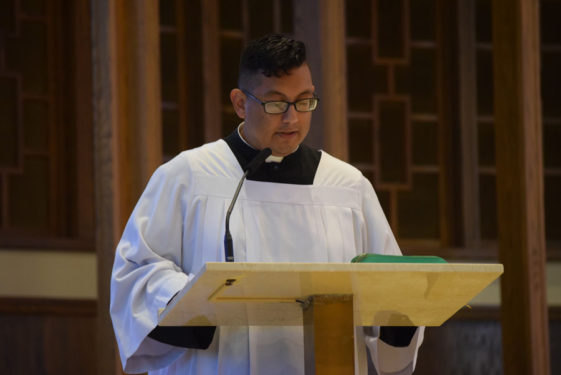 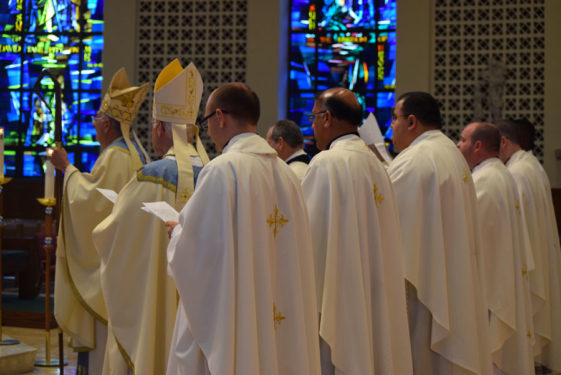 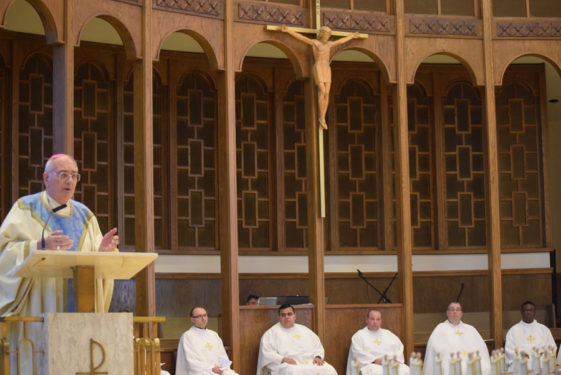 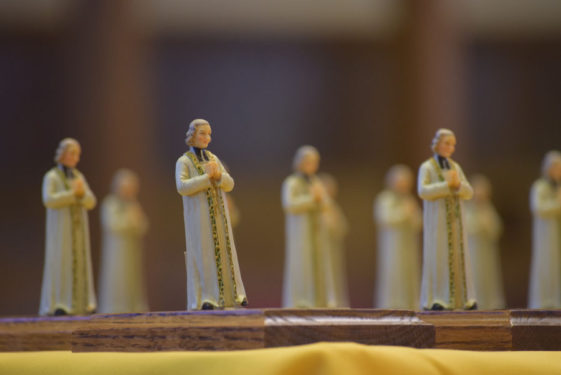 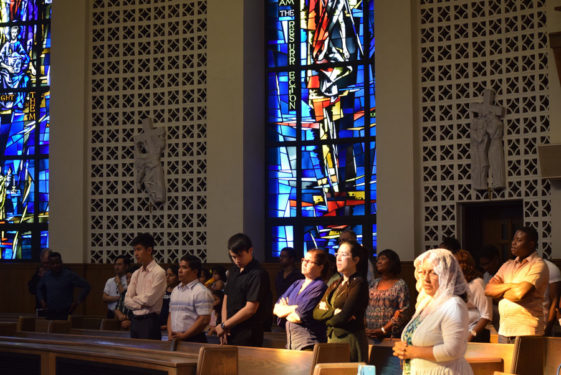 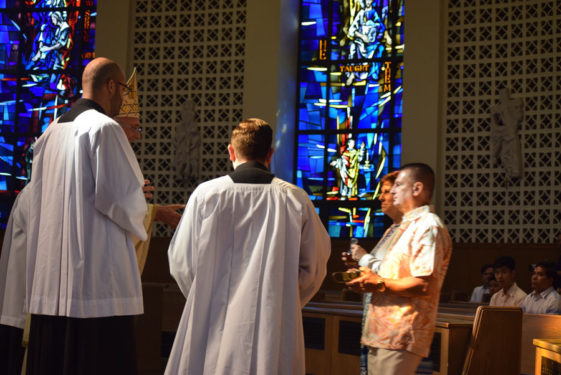 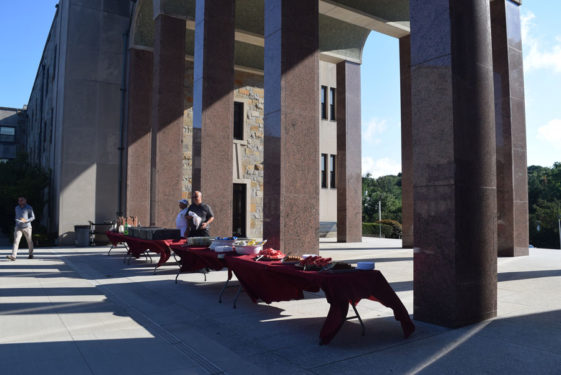 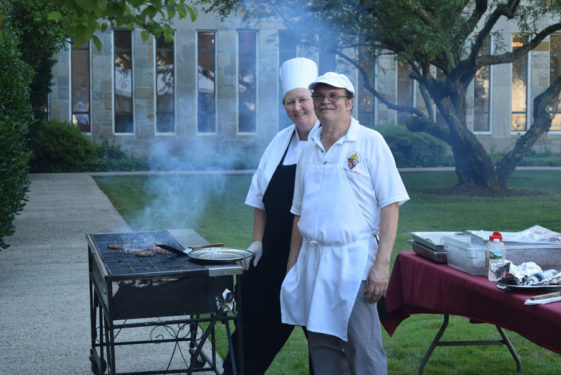 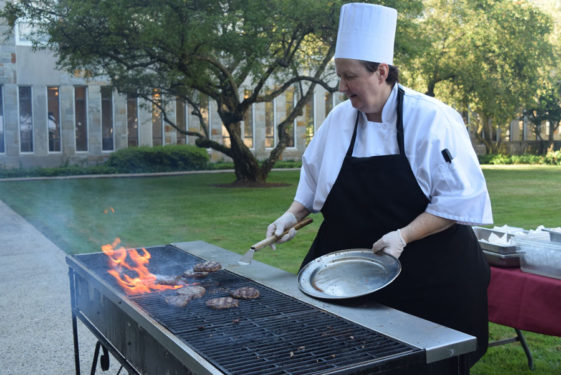 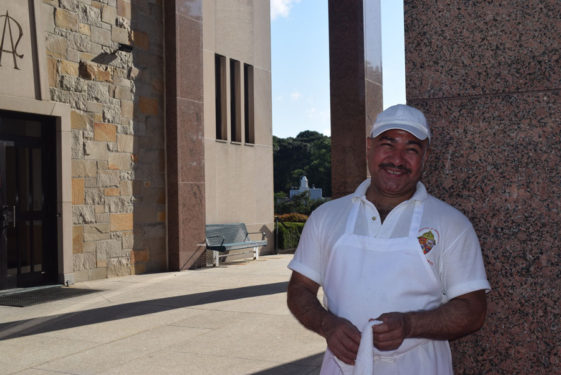 “I understood what faith meant and it needs to be a part of your life, and you need to do that, you need to be able to pay it forward, but it also allows me to stay connected on my son’s journey to the priesthood and beyond.”

After Mass, the burgers from the barbecue grill and buffet attracted families to an early evening of fellowship on the portico of Immaculate Conception Center, where the House of Formation is located.

The spirit of St. John Vianney, the patron saint of parish priests, was evident as seminarians, families and friends sat down together for a meal and conversation to end a day and begin the Year of Vocations.