Such is this case for the Knights’ varsity ice hockey team, which recently captured the CHSHL ‘B’ Division championship with 5-1 and 5-3 victories over St. Edmund Prep, Sheepshead Bay, at Abe Stark Arena in Coney Island. 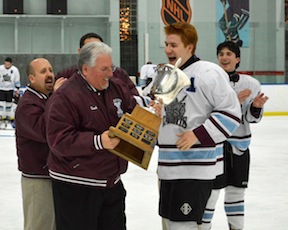 The victory marks the first time the school has won a ‘B’ championship and the first championship win for Xavier since taking home the ‘C’ Division title during the 2004-2005 season.

In the championship game, the St. Edmund’s Eagles scored two quick goals on the Knights within the first four minutes of play in the first period, but Knights’ senior Tyler D’Agostino scored two goals in the second period to tie the game.

Senior Michael Flynn took charge in the third period, scoring two unassisted goals with the game-winner coming with 1:42 left in the game. Flynn’s game winner was followed by an empty-net goal by sophomore George Clark to put the exclamation point on the Knights’ championship season. The offensive and defensive play of seniors James Ciminelli and Jake Erhard aided in the win. 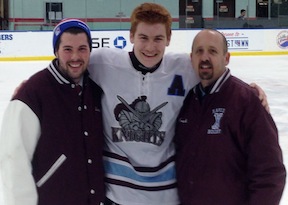 “It’s always great to see a team evolve over their Xavier hockey seasons, but this team had the right recipe this year,” said head coach Al Dimauro. “Determination, focus, commitment, resilience, unselfishness and camaraderie mixed in with talent, skill, speed and a deep bench were the ingredients that proved to be the right ones for winning a championship. It’s not about one, two or three players…it’s about a group of young men who came together as a team that made Xavier ice hockey history. What more can a coach ask of his team!”
Previous Sports Story
Next Sports Story