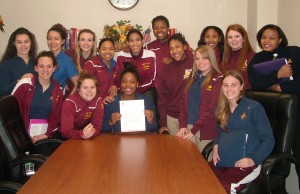 The 6-foot senior guard led the Royals to a 21-4 record and the semifinals of the state Catholic high school championships. Calhoun averaged 24.0 points, 9.3 rebounds, 4.0 steals and 3.5 assists per game. A First Team All-American selection by the Women’s Basketball Coaches Association, she was also chosen to play in the McDonald’s High School All-American Game and is a two-time First Team All-State honoree.

Calhoun has maintained a B average in the classroom. She has volunteered locally assisting special needs students at an elementary school and coaching youth basketball players.

“She can dribble, shoot, come off screens, beat you inside,” said Scott Lagas, head coach at Archbishop Molloy High.“She doesn’t take bad shots and she gets her teammates involved. There’s not much she can’t do.”

Calhoun has signed a National Letter of Intent to play basketball on scholarship at Duke University this fall. The Gatorade Player of the Year program annually recognizes one winner in the District of Columbia and each of the 50 states that sanction high school football, girls volleyball, boys and girls cross country, boys and girls basketball, boys and girls soccer, baseball, softball, and boys and girls track & field, and awards one National Player of the Year in each sport. The selection process is administered by the Gatorade high school sports leadership team in partnership with USA TODAY High School Sports, which work with top sport-specific experts and a media advisory board of accomplished, veteran prep sports journalists to determine the state winners in each sport.