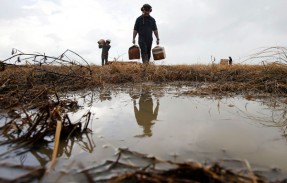 As a huge culvert discharged sewage into the flooded streets, Tejada, 50, and her family retreated indoors, while passers-by held their noses.

With no running water in their homes, kids sometimes bathed in the floodwater. Tejada worried whether the pollution would harm the health of her two-year-old and seven-month-old grandchildren.

“This is a foul-smelling place,” she said of the neighborhood where she has lived for eight years, and where the precarious wooden houses lack water and sewer service. “But we’re poor. We have nowhere else to go.”

Of all the environmental injustices that Pope Francis could address in the encyclical on ecology and climate, to be published June 18, lack of access to sufficient clean water is emblematic, said Christiana Z. Peppard, assistant professor of theology, science and ethics at Fordham University.

“Water is a central part of Catholic teaching on environment and social justice,” said Peppard, an expert on water and ethics. “It’s tangible, it’s essential for life, and it’s a way of anchoring more general claims about justice and political economy and how climate change will disproportionately affect people living in poverty.”

The encyclical comes amid indications that climate change – which Pope Francis has identified as a pressing issue – is exacerbating conflicts and social problems around the world, said Anthony Annett, climate change and sustainable development adviser to the Earth Institute at Columbia University and to the non-profit Religions for Peace.

With its large expanses of forest and network of broad, looping rivers, the Amazon region, which is shared by nine countries, appears to have an endless supply of water and trees. But its rivers are being harnessed for hydroelectric energy and poisoned by mercury from unregulated mining operations. Scientists estimate that about 20 percent of the original forest has been lost to roads, farming, ranching, logging and other human activities.

“There are situations of privilege where some people benefit and situations of burden where other people are deprived of access” to water, land or the benefits of infrastructure projects, Peppard said.

The Amazon “is a place where I think that the idea (that) the goods of creation (are) intended for all is really important,” she said. Those goods are “not for the benefit of a few corporations or governments, but need to be equitably shared.”

Pollution from mining, agriculture and wastewater, as well as sedimentation due to erosion resulting from deforestation, can reduce the fish on which many Amazonian communities depend for protein and livelihoods.

Peppard hopes Pope Francis’ encyclical will draw attention to the unequal distribution of resources and the connections between consumer demand in wealthy countries and the impact on natural resources and poor communities in developing countries.

“What it means to have a life of well-being or even basic sufficiency is more than gross domestic product,” she said. “It’s tangible realities like ‘do (people) have clean water?’”

That resonates with Tejada, as she waits for the grimy floodwaters around her house to subside. The local parish has helped coordinate meetings between residents and government officials, and Tejada’s son made a video about the pollution that won a local competition on June 5, World Environment Day.

She hopes that will help draw attention to the problem, which she said affects at least 600 families.

“We just want clean water and sewer service,” Tejada said. “We want the mayor to listen to us.”