Visually telling the story of a great community of women is what artist Anne Goetze aims to do in her body of work, “Pray to Love: The Annecy France Nun Series,” currently on display at Visitation Monastery and Academy in Bay Ridge.

The Visitation Sisters of Brooklyn are hosting the exhibit in celebration of both the Year of Consecrated Life, and their 160th anniversary in the Brooklyn Diocese.

The series, which includes more than 30 pieces, focuses on the everyday life and natural surroundings of the Sisters of Visitation of the Monastere de La Visitation in modern-day
Annecy, France. Goetze’s paternal aunt belonged to the Annecy Visitation Community until her death at age 84 in January, 2014.

“This work is accumulated from going back and forth to Annecy over a span of about 20 years to see Aunt Helen – Sister Margaret Mary, V.H.M. It’s been two years worth of painting, but 20 years worth of documenting,” said Goetze, a native of Tennessee.

She arrived in Bay Ridge with her son Nathan Collie and her artwork in the back of a U-Haul late Monday. Mother Susan Marie Kasprzak, V.H.M., superior of the Visitation Sisters in Brooklyn, and Sister Mary Vu, L.H.C., in residence at the monastery, helped unload the canvases and carry them to the school’s Alumnae Room.

Cutting through layers of BubbleWrap, Goetze reveals her works, each telling its own story. Some capture places of interest and others show the Sisters praying, laughing and doing chores.

“Do you have the right soul” shows a Visitation Sister walking along the roadside with a red tote bag in hand. Goetze explains that it is Sister Annemarie, an American nun who buys groceries for the cloistered community of about 11 sisters. 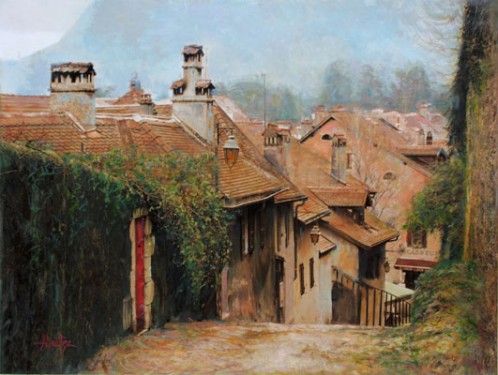 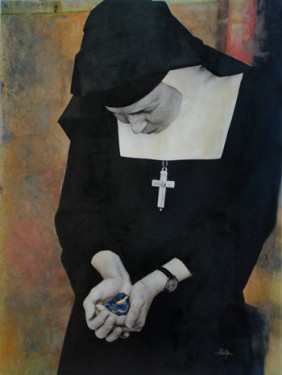 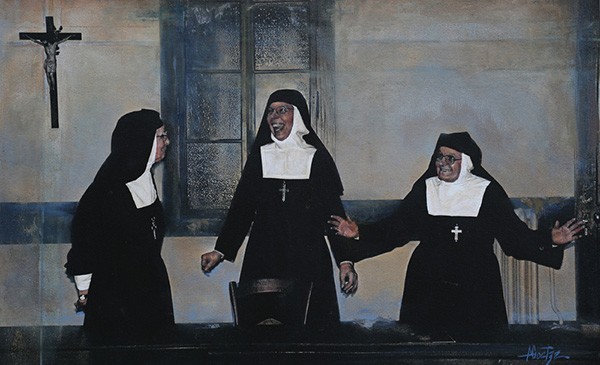 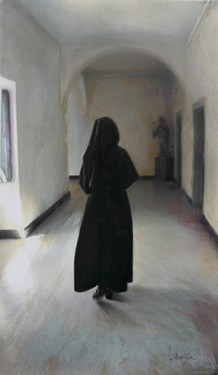 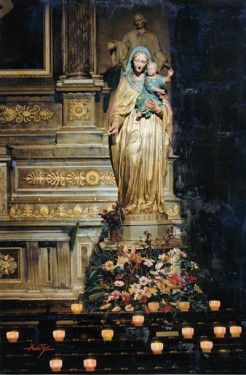 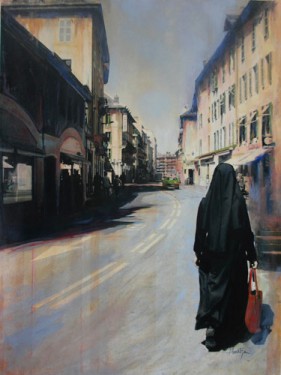 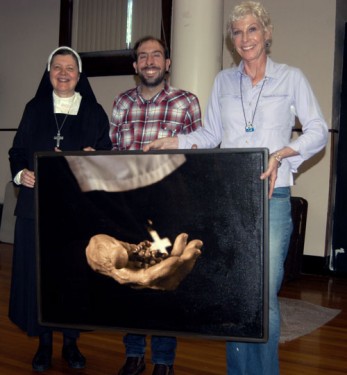 Although she claims no favorites because “each piece has meaning,” Goetze says it would be hard to part with a work she titled, “Inspiration.”

“This one I love. It’s where St. Francis de Sales (one of the founders of the Visitation Sisters) lived a while and wrote some of his famous writings.”

Using a technique of oil paint, glazes and layers of natural wood ashes over her own black and white photography, Goetze creates unique mixed media on canvas.

“There is the push and pull between realism and impressionism. Hopefully, you don’t know if it’s a painting or a photograph because it’s both,” she said.

The title of the exhibit comes from one of the Visitation Sisters’ mottos: “Pray to love. Love to pray.” Goetze found those words inside a book of her late aunt’s meditations.

Growing up, she rarely saw her aunt, who entered this order of religious sisters in her native Wheeling, West Va., and later felt called to serve in France. There was much she didn’t understand about her aunt’s cloistered life behind monastery walls.

During frequent visits over the last two decades, she developed a deeper respect and admiration for her aunt, as well as the Visitation Sisters and their contemplative order. This collection pays homage to the Sisters and their charism of humility and gentleness.

Goetze has been praying for a way to bring the exhibit to all 11 Visitation Sisters’ monasteries in the U.S. and then to Annecy. She already exhibited the pieces at the Customs House Museum and Cultural Center in Clarksville, Tenn., earlier this year.

One week after that show, she received an email from Mother Susan Marie.

The Brooklyn nun had been advised to make a retreat at the Monastere de La Visitation and while researching Annecy, she found an article in the Nashville Arts Magazine about the “Pray to Love” exhibit, and a related documentary by Collie.

“I was so excited,” said Mother Susan Marie, who recalled meeting Goetze’s aunt in France during a celebration of the order’s 400th anniversary in 2010.

The next morning, she shared the news with school principal, Arlene Figaro, and the two women decided to invite the artist to show her work and address the students.

“When I heard that Anne had been praying to take this around and I stumbled on this, literally stumbled, I knew that was Divine Providence,” Mother Susan Marie said.

Goetze looks forward to sharing her work with the people of the diocese, especially the girls of Visitation Academy.

“It might speak to some of the girls that this would be a life for them,” she said.

2 thoughts on “Visitation Sisters Host Artworks to Pray By”