Cloistered away in a monastery in Borough Park, the Sisters Adorers of the Precious Blood and Servants of the Lord and the Virgin of Matará Sisters (S.S.V.M.) minister unseen at the service of God and their brothers and sisters. 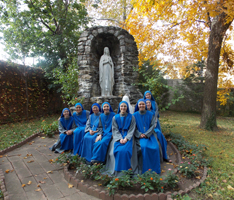 The pairing may seem unusual: The Precious Blood Sisters have a long history in the diocese, having arrived in 1890, just 29 years after their order was founded in Quebec, Canada. The Sister Servants, on the other hand, are relative newcomers, both in the diocese, having arrived just 17 years ago, and as a religious order. This year marks the 25th anniversary of Sister Servants’ founding as part of the Institute of the Incarnate Word in San Rafael, Argentina.

The orders have different charisms, horariums and members vary significantly in age. Yet, they have become what Servant Sister Verbo Encarnado, S.S.V.M., calls “a big family. We have differences, but our focus on prayer is the same.”

The two communities first met just over a year ago when the Sister Servants’ former monastery at St. Thomas Aquinas parish, Flatlands, their home for 13 years, was in need of major repairs. The Sisters couldn’t stay, but they had no place to go.

Enter Sister Maryann Seton Lopiccolo, S.C., diocesan episcopal delegate for religious, who at the suggestion of Bishop Nicholas DiMarzio, approached the Precious Blood Sisters. Their 103-year-old monastery – once a place of retreat and pilgrimage for the faithful – had ample living space that was going unused. When the Borough Park nuns heard about the plight of the young order, they opened their arms and home to them. 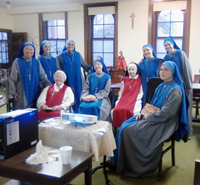 “Our General Superior came at the end of November (2011) to visit the monastery,” said Mother Superior Maria del Redentor, S.S.V.M. of the St. Edith Stein Monastery, located within Precious Blood Monastery. The Sisters received permission to move the following month.

Though both communities are small, they are abundant in faith and spirit. Five Precious Blood Sisters, aged 79 to 97, share the monastery with nine Sister Servants, aged 29 to 60, including newcomer Sister Mater Cruci Corde Affixa, S.S.V.M., who arrived four months ago.

“It’s wonderful to be here,” she said. “They always express how happy they are to have us here, and we enjoy their Irish sense of humor.”

The Precious Blood Sisters have equally expressed their enthusiasm and appreciation for the presence of the younger community. They are happy to enjoy a good relationship with them.

Each community has its own living and dining quarters and its own schedule, but Sisters see each other throughout the day as they pass in and out of the chapel. 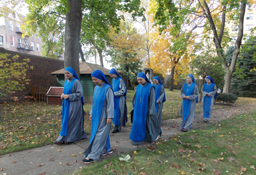 Both orders gather together for morning prayer, daily Mass and Eucharistic Benediction. At Mass, a Precious Blood Sister plays the organ, while Sister Servants enrich the liturgy with song, often choosing Latin hymns, which bring back fond memories for their older counterparts.

Prayer is the most important aspect of life for both communities.

Precious Blood Sisters are called to a charism of adoration of the Precious Blood of Jesus in the Eucharist for the reparation of sins. They serve the Church by praying especially for priests but also for the sanctification of nations, the zeal of evangelizers and all God’s people.

As for the Sister Servants, “Our (prayer) goal is the evangelization of culture,” Mother Redentor said.

Sister Servants pray for conversion, vocations, for the missions, the intentions of the Holy Father and special prayer requests.

Each monastery of Sister Servants also has a particular intention for which they pray. As their monastery is under the patronage of Jewish convert, Edith Stein (St. Teresa Benedicta of the Cross), their prayers are for the Jewish people, which makes the Sisters’ move to the Orthodox Jewish area of Borough Park even more fitting.

Regarding their particular intentions for their Jewish brethren, Sister Mary of the Annunciation, S.S.V.M., explains, “Our lives are given for God, and He will distribute the prayers and blessings as He intends.” 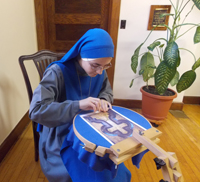 Part of the Sister Servants’ prayer life also includes the ministry of making priestly vestments, altar linens, baptismal gowns and rosaries. In 2011, they stitched 25 purple stoles that were used for confession at World Youth Day in Madrid.

“It’s a beautiful experience to be with them and pray with them,” added Sister Maria del Tabor, S.S.V.M. “They enrich us.”

Since both orders share a devotion to St. Joseph and celebrate the feast of the Exultation of the Cross, they jointly observed these feasts last year.

“For us, as a young order, it’s really a great example to see their devotion,” said Mother Redentor, who entered religious life almost 23 years ago in her native Argentina. She was among the first contemplative Sister Servants to come to the diocese in 1995.

“Seeing the perseverance of the (Precious Blood) Sisters, who took their vows 60 and 70 years ago, is an inspiration,” added Sister Marie de la Trinite, a Philippine native and religious sister for almost 13 years.

Mother Redentor noted that both communities also come together for holy days, birthdays and recreation.

On Christmas Eve, the Sisters enjoyed hors d’oeuvres with Msgr. Philip Reilly, chaplain to the Precious Blood Sisters. At midnight, the Precious Blood Sisters shared in the Sister Servants’ tradition of dressing an Infant Jesus statue in a handmade garment reflecting a prayer intention. This year, the intention was peace, and the statue was attired as the Prince of Peace.

All are welcome to join the Sisters at Precious Blood Monastery’s church for 7:30 a.m. weekday Mass and Eucharistic adoration every first Thursday of the month, 6:30-8 p.m.

Photos courtesy of the Servants of the Lord and the Virgin of Matará Sisters.