By Alexa Roberto and Isabella Spallino

As current seniors at The Mary Louis Academy (TMLA) in Jamaica Estates, we have had the opportunity to meet and interact with many wonderful sisters from the Congregation of Sisters of St. Joseph (C.S.J.), who sponsor our school.

We have taken part in C.S.J.- themed activities, such as workshops and retreats at the sisters’ motherhouse in Brentwood, L.I.; attended liturgies with the sisters; interacted with other C.S.J. high schools in Brooklyn, Nassau and Puerto Rico and helped the sisters at their retreat house. We have experienced firsthand the life and mission of the sisters at numerous events and occasions.

Since the order’s founding in Le Puy, France, in 1650, the Sisters of St. Joseph have dedicated their lives to serving God and God’s people in the community and the world. In the Diocese of Brooklyn, the Sisters of St. Joseph of Brentwood arrived in 1856. They have lived their lives by helping others in any way they can. All of the different services they provide have helped people of all ages.

We have learned much about the sisters, including those who founded the community and who worked in the diocese as teachers and nurses during the first part of the 20th century. 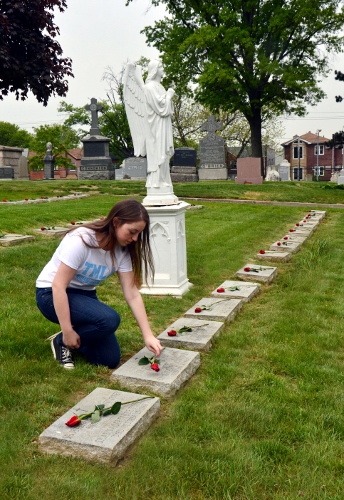 We were excited to honor them and all the work they did with a visit to Mt. St. Mary Cemetery in Flushing, which has a section for the Sisters of St. Joseph. At the cemetery, several TMLA students placed yellow roses on the graves of sisters who were affiliated with TMLA (the yellow rose is the traditional flower of the school), and red roses on the graves of all the other sisters.

Although the sisters have a large cemetery on the grounds of their motherhouse, more than 550 sisters are buried at Mt. St. Mary’s, which was originally part of St. Michael’s parish. These include the earliest founding sisters, such as Mother Mary Austin Keane, first superior of the sisters in Brooklyn. Also at rest there is Mother Mary DeChantal

Keating, who volunteered as a battlefield nurse during the Civil War. She was awarded a medal from the Grand Army of the Republic for her service and has a military marker denoting her burial spot. At TMLA, a wing was added to the school building in 1956 and was named DeChantal Hall in her honor.

Also buried in the sisters’ section is Father James O’Beirne, pastor of St. Michael’s parish, who welcomed the sisters to Flushing in 1860.

The original grave markers, which had deteriorated greatly over the last 150 years, were replaced with new headstones and detailed landscaping nearly a decade ago. 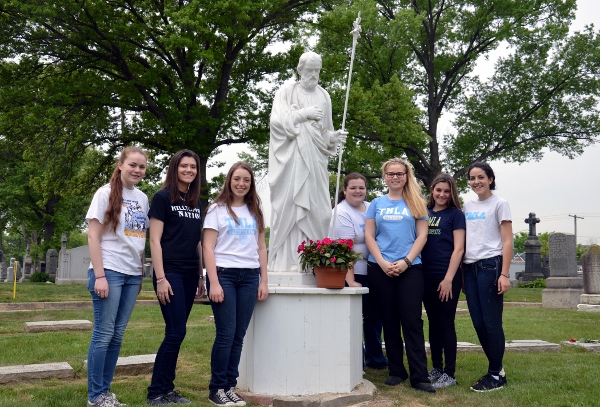 2 thoughts on “TMLA Students Honor Past Sisters of St. Joseph”