WINDSOR TERRACE — Noelle Pianoforte “thought it was a dream,” Jias Jordan “never expected” it, and Santiago Diniz simply “had a lot of fun.”

Those were the surprised reactions of the students when they were told they were the top three subscription-selling winners in this year’s The Tablet’s COVID Relief Fundraiser.

The Tablet subscriptions sold during the month-long campaign resulted in more than $30,000 going back into students’ and schools’ pockets. Those checks are finally in the process of being signed, sealed, and delivered to participating students across the Diocese of Brooklyn.

Every student who participated in the campaign received $10 for each subscription sold (three orders were required to qualify), and their school received $5. The funds can help cover the costs of tuition and the hardships schools are experiencing due to the unexpected expenses associated with COVID guidelines.

John Alexander, circulation marketing manager at DeSales Media Group, the parent company of The Tablet, visited the schools of the top three winners on June 3 and presented each with a larger-than-life cardboard check — a souvenir for their hard work.

“I was just so confused,” Pianoforte said. “I thought it was a dream, so I had to pinch myself like 15 times.”

So what does Pianoforte plan to do with that huge chunk of change? She wants to put a portion of it towards her future at St. Athanasius Catholic Academy.

“We did tell her that [the money] was her’s, but she is such a good kid. She does want to help us with our tuition for next year,” said Noelle’s mother, Kristy, who was proud of all the hard work Noelle put forth between March and April. “It’s a blessing that she even has that thought at her age, but that’s what she wants to do with it.”

“It’s so nice to see that spirit in a child. She wanted something for the school, for her family,” St. Athanasius Catholic Academy Principal Diane Competello said of Noelle. “She really, really stepped up to the plate.”

Though the competition remained tight as hundreds of students in 52 participating diocesan schools all sought to sell the most subscriptions, Pianoforte said her favorite part of the effort was raising lots of money for St. Athanasius and the Diocese of Brooklyn.

“I learned that raising money for your school isn’t really that hard,” she added. “It’s just fun and very exciting.”

Not only did he sell 40 subscriptions, but Jordan also won a month’s tuition, worth more than $400. St. Elizabeth Catholic Academy Principal Jeanne Shannon said she offered the discounted tuition as an extra, school-wide incentive for students to participate in the fundraiser.

“I never expected to actually win,” said Jordan, explaining that he reached out to his mother’s friends and family who live nearby, as well as abroad. “[When] I saw that you can get one month free on tuition, I just decided to do it for [financial] help for my family.”

Santiago Diniz, a third-grader at St. Sebastian Catholic Academy, walked away with $1,000 after selling 22 subscriptions. His mother had filmed him giving an elevator pitch, explaining what The Tablet was and how subscriptions could benefit those who pay local Catholic school tuition or have made pandemic-related purchases in schools.

St. Sebastian Catholic Academy Principal Michelle Picarello said she was excited to hear Diniz was one of the diocese’s top three subscription sellers.

“I’m glad it was Santiago,” said Picarello, noting that Diniz enrolled at St. Sebastian’s this year. “He’s just such a sweet kid and is great to talk to even when I go visit him in the classroom or in afterschool [activities].”

Msgr. David Cassato, vicar for Catholic schools and pastor of St. Athanasius-St. Dominic Church, was blown away by the students’ sales-pitching skills and passion for the campaign.

“It was a really great experience to see all these schools coming together to really create better communication with people in the diocese [and] with The Tablet,” Msgr. Cassato said.

“The Tablet is a great tool of evangelization, and people that get The Tablet now probably have never read it,” he added. “It’s a good chance for them to deepen their faith and to get more involved in church.”

The fundraiser offered other benefits that extended beyond cash rewards, according to Gina Krainchich, director of educational media services at Catholic Telemedia Network. She said students who participated had the opportunity to gain a greater appreciation for reading, writing, and the news in general.

“Having students involved in the subscription campaign got them excited about the newspaper, and they see that their school stories are being told,” Krainchich said. “We may have even inspired a few budding Tablet Jr. writers.”

“There are so many people to thank,” Alexander said, “including Bay Ridge Catholic Principal Kevin Flanagan who helped kick off the fundraiser by dressing up as a paperboy and getting his whole school motivated, St. Francis de Sales Principal Chris Scharbach who rallied his school and called me periodically to see what he could do to help, and especially Msgr. Cassato, who went above and beyond in helping promote the campaign on social media.”

“I’m just especially grateful for all the support and I hope all the schools follow the model of the top-earning schools and give it their best effort next year,” Alexander added.

Bay Ridge Catholic Academy accumulated the second-most amount of subscriptions in the larger school category, obtaining a total of 187 orders.

“Witnessing our students and families get behind this mission of spreading the Gospel through The Tablet newspaper has proved that our students are being prepared to be leaders in their church and community,” Flanagan said.

Given the campaign’s popularity among the diocese’s elementary schools, The Tablet COVID Relief Fundraiser will likely return in the fall, for high schools and parishes.

To see the full list of the Tablet COVID Relief Fundraiser winners, click on the image below: 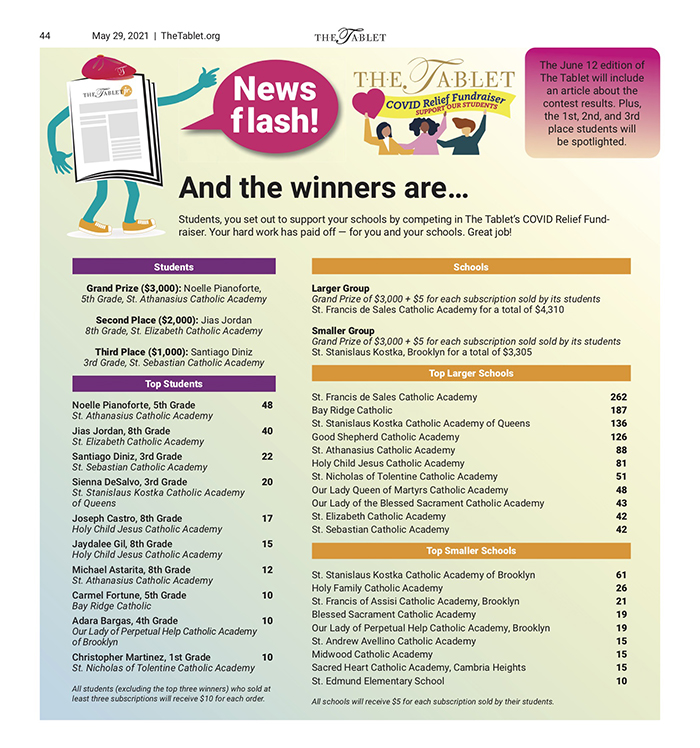