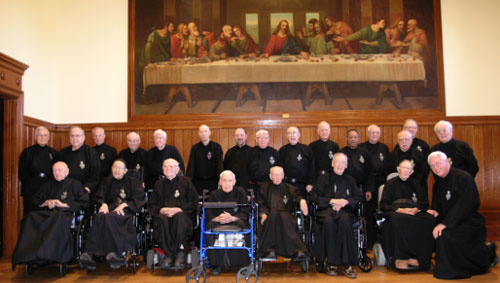 Pictured under the gaze of the apostolic family at the Last Supper is the Passionist family in Jamaica Estates. This Thanksgiving, the Passionists are giving thanks for their newly renovated dining room. The expanded space allows more comfort for disabled members of the community as well as for guests visiting the monastery. The community actively serves the diocese through Immaculate Conception parish, the retreat house and other ministries, especially the sacrament of reconciliation. (Photo courtesy Father Ted Walsh)

This Advent, the Church of the Ascension, Elmhurst, is hosting the Filipino devotion, Simbang Gabi – a nine-day series of Masses in anticipation of Christmas and to honor the Blessed Mother – Dec. 15-23 at 7 p.m. All are welcome. For more details, call 718-335-2626.

Mercy Home for Children wishes to remind Tablet readers that the fourth annual #GivingTuesday will take place Dec. 1. #GivingTuesday inspires personal philanthropy and encourages bigger, better and smarter charitable giving during the holiday season. Every dollar donated to Mercy Home will make a difference in the lives of children and adults with developmental challenges in Brooklyn and Queens. Visit www.mercyhomeny.org or call 718-832-1075.

Good news coming out of Jamaica: The Institute of International Education’s most recent Open Doors data report lists St. John’s University alongside some of the top colleges in the nation for its study abroad participation rate among undergraduate students. St. John’s University offers over a dozen locations for study abroad across Europe, Latin America, Africa and Asia, including its own campuses in Rome, Italy and Paris, France.

Celebrate the 150th anniversary of St. Nicholas Church, a worship site of Divine Mercy parish, Williamsburg, on Dec. 6 starting with 11 a.m. Mass. A reception follows. For tickets, contact Dominick at 646- 584-3344 or Rina at rinastnickalumni@aol.com.

This week’s Tip of the Tablet TALK Top Hat goes to the St. Anastasia Knights of Columbus Council No. 5911 in Douglaston, on collecting 53 pints of blood during a drive earlier this month. The Knights were grateful for the assistance of St. Anastasia’s Boy Scout Troop No. 153. 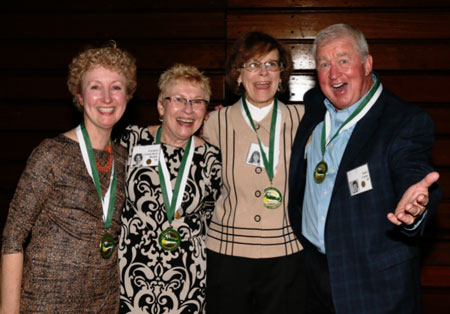 Mater Christi D.H.S. alumni enjoyed a special reunion this fall as 240 graduates gathered to mark the school’s first 50th anniversary class – the Class of 1965. The classes of 1970, ’75 and ’80 were also honored. Alumni returned to the Astoria school, now known as St. John’s Prep, for a Mass celebrated by Father Charles Gilley, chaplain, in the chapel, which is dedicated to the Mother of Christ. A gala reception followed with an appearance from the Mater Christi mascot, the Gator. Class of 1965 attendees were inducted into the Mater Christi Golden Alumni Club and received medallions to mark this 50-year milestone for both their class and school. Prep Principal William Higgins observed that the members of the Class of 1965 were pioneers as they led the way for all Mater Christi classes that followed. (Photo courtesy St. John’s Prep)