The Carnesecca Arena at St. John’s University, Jamaica, was filled with nearly 2,000 teens screaming, crying and stomping last weekend, but when the guest of honor came to the forefront, all became still. 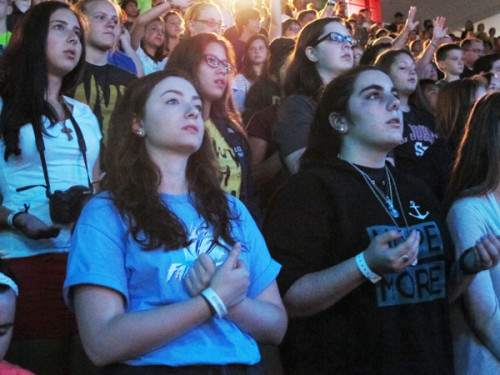 “It’s Him!” said Vanessa Exil, 20, speaking of the true presence of Jesus Christ in the Blessed Sacrament. “We are in His presence and He is with us.”

The young parishioner from St. Gerard Majella Church, Hollis, came to the Steubenville NYC conference Aug. 7-9, as preparation for next year’s World Youth Day Poland. She said she came to the event, unsure of what to expect, and rediscovered some basic, but profound tenets of her faith. She said she has come to truly realize that upon consuming the Eucharist, she is uniting herself with her Creator.

“It was scary,” she said. “He is not just a God that is with us. He is truly present within us.”

Husley Salomon, 14, from Presentation B.V.M. parish, Jamaica, came to the weekend retreat with a clear goal in mind.

“I wanted to experience what God really is in person,” he said. God granted him this grace during Holy Hour. “You could really sense God’s presence and He really wants you to follow Him.”

At the end of a weekend that was jam-packed with upbeat Catholic rock, laser lights, the sacrament of reconciliation, enthusiastic speakers from many different walks of life and lots of prayer, Salomon answered a very important question.

Right before sending the nearly 2,000 teens back home to continue their journeys, a priest came to the stage and asked any young men discerning the call to the priesthood to stand up and come down to the stage for a special blessing.

“My legs stood up on their own,” said 14-year-old Presentation B.V.M. parishioner, James Sinch, who joined Salomon and dozens of other young men down on the stage.

Both Solomon and Sinch said they had considered the priesthood before. Solomon said people have been telling him he is meant for the priesthood since he was 8 years old. This weekend, he realized that it might not be so bad. Sinch began attending Mass when he was 12, and since then he thought he might be hearing a call directly from God.

Paul Morisi, coordinator of adolescent and young adult faith formation for the Diocese of Brooklyn, said he was not surprised.

“I know the Lord is calling young people to a life of service through religious life and priesthood,” he said. “We just gave them the opportunity to come forward.”

Young women who thought they might be called to religious life were also called down to the stage and dozens of eager young ladies showed their willingness to answer the call in front of thousands of their peers. 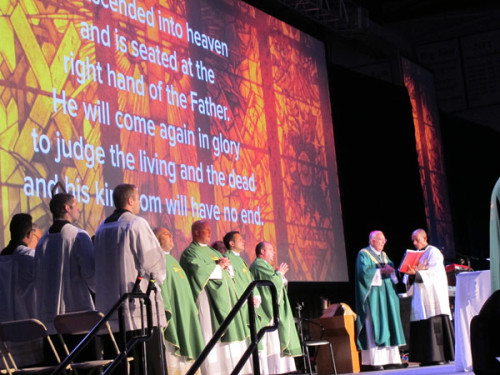 Bishop Nicholas DiMarzio, who was the main celebrant at the closing Mass, said that a recent study conducted by St. John’s University revealed that among the greatest obstacles young people face in answering the call to religious life is fear of the reaction from their peers, not their parents as has been thought previously.

The profound enthusiasm demonstrated by the youth at the conference helped Luciana D’Cruze, a volunteer from St. Gerard Majella, recommit herself to answering God’s call. She said she truly felt the calling at World Youth Day in Brazil, two years ago, and would be entering the Institute of the Religious Teachers Filippini. She would have to leave all her friends and the life she knew behind and was starting to be anxious. However, the enthusiasm of the youth present has helped her recommit.

“They’re screaming. They’re crying. They are giving all their pain, their happiness to Jesus,” she said.

“You’re enthusiasm is incredible,” Bishop DiMarzio said at the beginning of the closing Mass. “Keep this enthusiasm up as we celebrate this Eucharist. Keep it for the rest of your lives.”

However, he warned them to not misconstrue all the noise, music and energy they experienced during the weekend. He said believers do not commune with the Lord for a spiritual high. 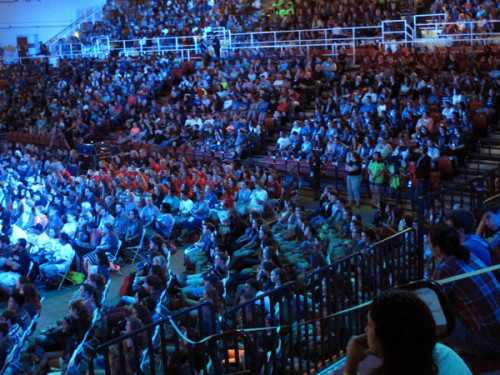 Randy Raus, president and CEO of LifeTeen, the non-profit that worked with Franciscan University in Steubenville, Ohio, to bring this event to New York, said the event strives to be countercultural.

“When teens encounter Christ, it changes everything: participation in Church, relationships with family and who they have as friends,” he said. The goal, in the grand scheme of things, he said, is to change the world.

John Beaulieu, director of partnerships and engagement for the Christian Outreach Office at Franciscan University, admitted to teens at the conference that the Church Militant is broken. He said the brokenness may be evident in their own parishes and even in their own homes, where regular Mass attendance may or may not be part of their family life.

“It is your responsibility to spread the love,” he said.

Morisi said the diocese will host the Steubenville NYC event again for the next two summers. 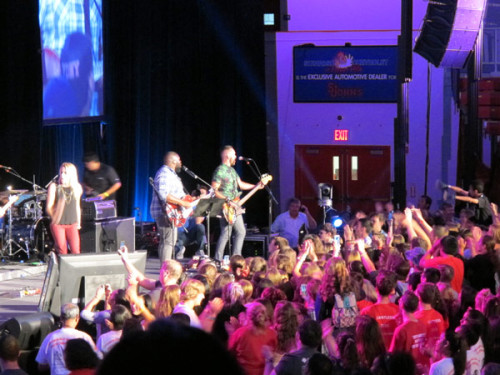 One thought on “Steubenville NYC: Eager Youth Listen for Call”