The St. Francis Prep community will take a break from its academic program on Tuesday, Oct. 4, to celebrate the feast day of the school’s patron saint, Francis of Assisi.

The day will also mark the return of statue of St. Francis of Assisi that was part of the school’s first campus on Butler St. in the Cobble Hill neighborhood of Brooklyn.

When the Prep moved to the Northside of Williamsburg in the mid-20th century, the night watchman of the old property offered that statue to the DeMarinis family who also lived on Butler St.

The family’s children remember four men carrying the statue down the street to the family home. They marvelled at how the statue even had a calming effect on their little grandchildren, when brought face-to-face with the statue. 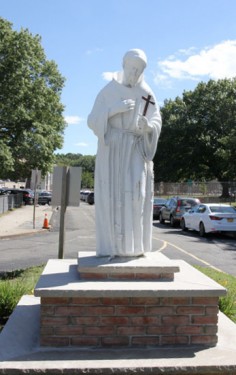 The statue was with the DeMarinis family until they relocated a few years ago. At that time, the family contacted the Franciscan Brothers at Prep, and returned the statue. No small feat, since the school’s expert maintenance staff not only repaired the statue, but also built a brick base for it at the entrance to the school’s parking lot in Fresh Meadows. Now, St. Francis greets those who contribute to the education of today’s Prep students each and every day.

Prep students are steeped in the necessity of service, and respect for the natural world, in emulation of Francis, who was a champion for those in need and the environment.

The day will acknowledge and celebrate many dedicated teachers and staff members who have had a lasting impact through their longevity.

That’s 160 years! Brother Adrian Fannon, O.S.F. will be recognized for his 60th anniversary as a Franciscan Brother.

Those educators will be honored at a morning Mass at the school, celebrated by Auxiliary Bishop Paul Sanchez and concelebrated by the school’s newly appointed chaplain, Father Mark Simmons.