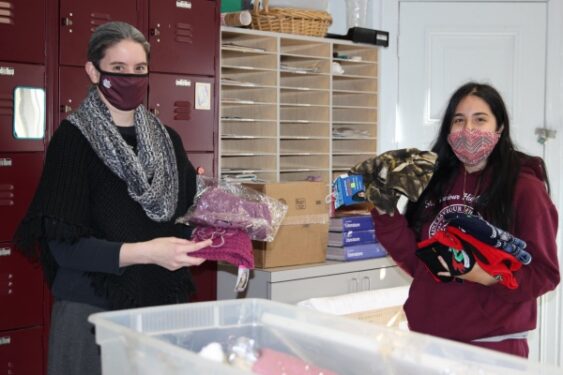 Campus Minister Director Deborah Sucich and junior Allie Giordano reorganize a stack of scarves that were collected in less than a week. (Photos: Erin DeGregorio) 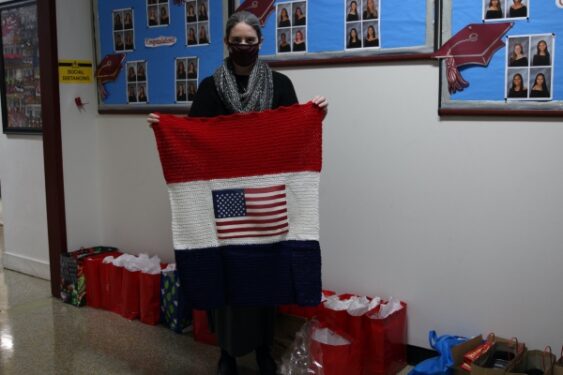 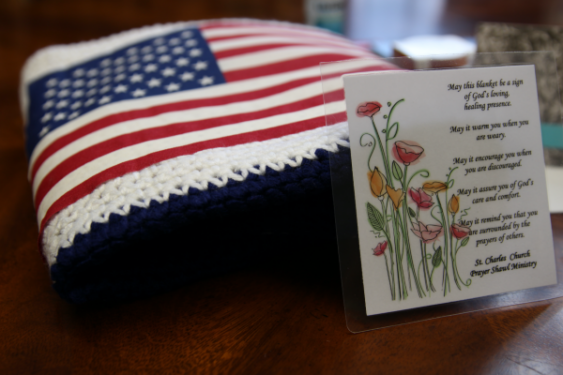 Sister Jeanine Conlon also included a personalized thank you card and a forget-me-not planter with her care packages. 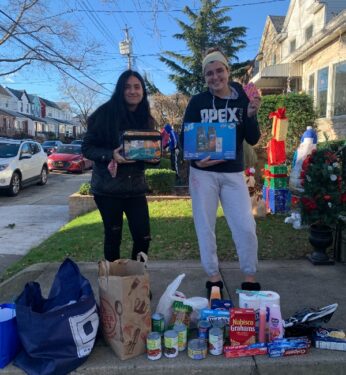 PARK SLOPE — St. Saviour High School junior Allie Giordano wanted to do more for others as the pandemic continued to unfold during the holiday season. She asked for help from her school’s administration with a Christmas service project she wanted to pursue — collecting items for the military through the American Red Cross Holidays for Heroes program.

Holidays for Heroes enables Americans to “Give Something That Means Something” this holiday season and other holidays year-round as a way to thank and recognize members of the military, veterans, and their families.

Giordano was inspired by her friend Melissa Clyne, who has been working at Memorial Sloan Kettering throughout this pandemic. Clyne felt inclined to not only help her colleagues but to start her own donation drive through the Red Cross program.

“I didn’t want anyone to forget about the veterans and military members, especially with everything going on in the world,” Clyne said in reference to the pandemic. “When I came across the Red Cross in my research, I thought it was a great program because you don’t have to give just Christmas gifts. You can donate canned goods, gift cards to chain restaurants and stores, and even PPE.”

The More, The Merrier

“It’s amazing that, during this pandemic, all this could be done,” Sucich said. “It gives people hope and some even a reason to be happy and joyful at this time when nothing’s normal. But it’s nice to know that this love, care, and support are still normal around the holidays.”

Parent Tara Kanehailua stopped by St. Saviour’s on Dec. 10 to drop off her contributions. She made four gift bags filled with thermal gloves, toiletries, and face coverings and planned to drop off boxes of packaged snacks the following week.

“We have a lot of family in the military, including my cousin who’s a major in the Marines,” Kanehailua said. “This is close to the heart.”

Giordano, who had never led a service project by herself before, felt her worries fade away when she continued to see donations like that be brought in.

“I didn’t think we were going to get that much because everyone’s at home. They might be less likely to donate if they had to go out of their way,” Giordano said on Dec. 10, five days before the project would end. “But, it’s going better than I thought, and I’m really happy with the response so far.”

Giordano also received toilet paper, pasta, toiletry gift sets for men and women, and other items in less than a week. Three large storage bins were also filled to the brim with socks, slippers, scarves, hats, and gloves.

In addition to Holidays for Heroes, St. Saviour High School also has an annual Giving Tree during December, with toys and gift cards being donated to Hour Children. Hour Children — which has exponentially grown under the leadership of Sister Tesa Fitzgerald, C.S.J., since 1986 — provides housing, mentoring, workforce education, and child care to incarcerated mothers and their children in New York.

However, this is not the first time St. Saviour’s has done a collection for the military. Last year, the school also participated in a soldier-related donation drive with several other Brooklyn high schools.

“The sacrifice of our soldiers is something close to our hearts and we’re so grateful to be able to give back to them in any way that we can,” Sucich explained. “And we’re grateful to Allie for initiating this project and to our parents who have been so supportive of our students and all of the fundraising projects we have here.”

St. Saviour’s, according to Sucich, is always looking to discover and cement new traditions like this within its community.

“The tradition of collecting for soldiers is now a trend and definitely something we want to continue,” she said. “Hopefully, our students, families, and alumni can rely on us next year to be a place where they can donate and help soldiers feel a little bit of extra Christmas cheer.”