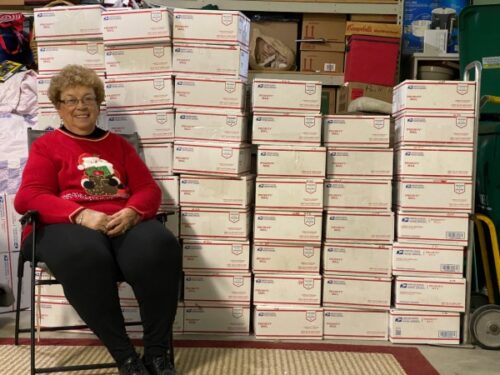 This year, 40,000 U.S. military members around the world will be receiving Christmas cards from Colorado grandmother Marlys Halbeisen. (Photo: Courtesy of Marlys Halbeisen) 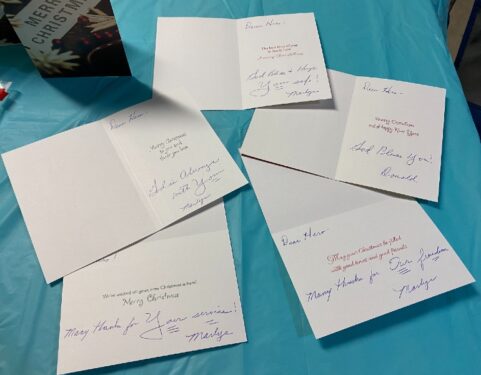 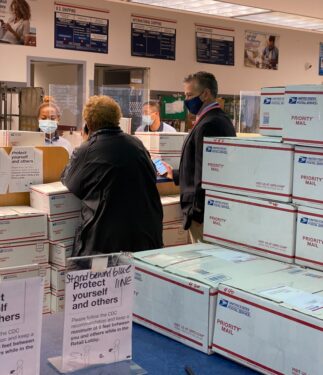 Ninety-four boxes were shipped to the United Soldiers and Sailors of America organization from Halbeisen's local post office on Oct. 22, 2020. (Photo: Courtesy of Marlys Halbeisen) 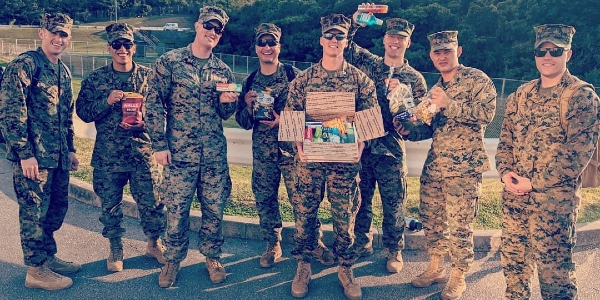 Halbeisen’s cards are included in care packages that are shipped by the United Soldiers and Sailors of America and received by various military bases and aircraft carriers by Christmas Day. (Photo: Courtesy of USASOA)

WINDSOR TERRACE — The past eight months of the pandemic have given many people the opportunity to try new hobbies and catch up on reading or binging on television.

Halbeisen first felt inspired to do something after attending an Air Force band concert in 2017.

“The organizers were saying how there were 150,000 troops all over the world in 22 countries, and, if anybody wanted to make a donation to support them, that would be desirable. After I stepped out of the concert and got home, I sat up all night thinking about what I could do,” she told The Tablet. “But, I remembered my late husband Donald [who served in Germany during the Korean War] saying that they never got any Christmas cards.”

“It just gives you such a good feeling to write, ‘Dear Hero, God bless you’ or ‘God bless and keep you safe,’” Halbeisen said. “But the one I like the best is ‘Dear Hero, Many thanks for your service.’ It’s so heartwarming to think that, maybe, somebody will really enjoy these cards.”

Inspired and excited, Halbeisen filled out 2,700 Christmas cards in 2018. She found a company that would accept her cards, which were later delivered to the U.S. Air Force Academy in Colorado Springs. The next year, she penned a whopping 18,000 Christmas cards.

But when Halbeisen discovered the company she previously worked with closed shop, she didn’t know what to do with the 26 ready-to-go boxes. Her daughter-in-law found the United Soldiers and Sailors of America (USASOA) organization — who accepted Halbeisen’s cards through their “Operation Christmas Cards for our Troops” program. USASOA’s obstacle, however, was not having the budget to pay for the shipping on such short notice. According to USASOA, it costs about $45 to ship 200 cards, depending on the destination.

Halbeisen’s local television station, plus friends, family, and strangers, helped pay the $2,300 bill, and the boxes were sent to one of the USASOA’s Maryland offices. The cards were later sent to Navy ships and bases worldwide — including in Japan, Germany, Italy, South Korea, and the Middle East. Five naval ships received Halbeisen’s cards in time for Christmas Day.

“Marlys is great, and I don’t know how she does it,” USASOA President John Yori said. “We’re so grateful to her and her generous kindness.”

Halbeisen used some leftover money from last year’s campaign to get an early jump on this year’s project. Her goal for 2020 was 20,000 cards but, on Dec. 26, she purchased 35,000 discounted Christmas cards — cleaning out the inventories at various Walmart and Dollar Tree stores.

In January, she began writing right away and was planning to host multiple writing parties with family, friends, and her state grange and Red Hat groups. But when the pandemic hit, plans changed. From January to September, Halbeisen spent her time writing messages and watching movies.

“A number of people said to me, ‘Why are you continuing to write these cards?’ You don’t know if they’ll go out because of the pandemic,” Halbeisen explained. “I told them, ‘But I don’t know that they won’t go out.”

Yori reassured her that she could still send her cards to USASOA.

“It’s very enjoyable, and I was never bored during the pandemic,” Halbeisen said. “If I got a writing cramp or if my penmanship was bad one day, I just didn’t write the cards and did it the following day.”

By September, she received an additional 5,000 cards that had been donated to her project. The 40,000 filled-out cards were shipped out to USASOA on Oct. 22. The 94 boxes cost $2,000 to ship, which was, once again, paid for through donations.

The Work’s Not Yet Done

Halbeisen already began working on her 2021 campaign when The Tablet spoke with her on Nov. 30. Five-thousand cards are currently sitting in her garage, waiting to be unboxed and personalized.

“I never stop,” she said with a laugh. “This year, on the Saturday before Thanksgiving, I found two boxes on my porch. Someone had ordered cards through Barnes and Noble in New York City and shipped them to my house.”

“I’ll take cards from anybody, anywhere, at any time,” Halbeisen added.

Across the country, Yori and a team of volunteers began sorting all the cards USASOA received this year during the second week of December. Yori estimates they’ve received between 70,000 and 80,000 cards. Andrews Air Force Base (Maryland) will be helping out and making sure the deliveries get to deployed service members in time for the holidays.

“After we check the cards, we send them out along with boxes filled with care package items,” Yori said. “It’s just wonderful. With everything going on, there’s been so much negativity.”

“Now, at Christmastime,” he added, “we can help be a part of something so positive and heartwarming.”