The team went 5-1 in pool play, which helped them earn the No. 1 seed for the semifinal match. 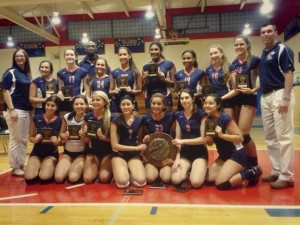 In the semifinal match, the L’il Terriers defeated Kennedy Catholic in two games, winning 25-22 and 25-18. LaForgia led the team with 13 kills, seven digs and two service aces. Gorecki and Sokolich each had six kills and two blocks. Tong recorded 26 assists.

Congratulations to the L’il Terriers on a job well done!