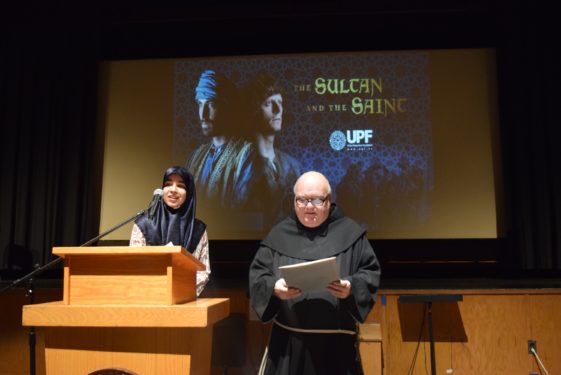 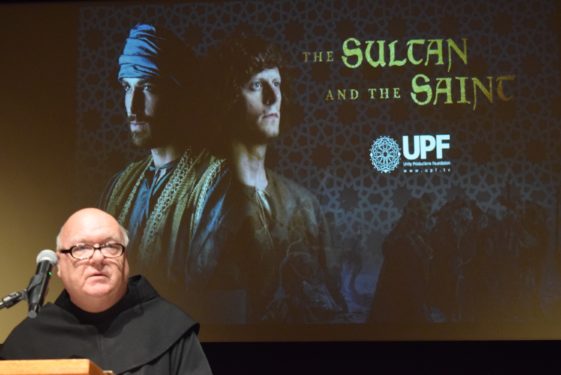 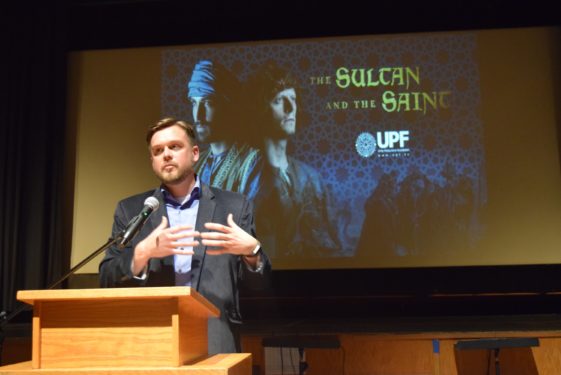 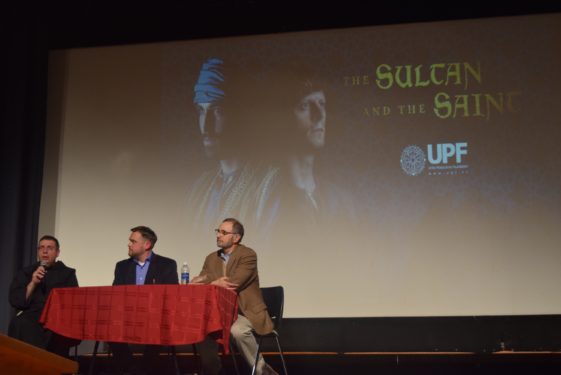 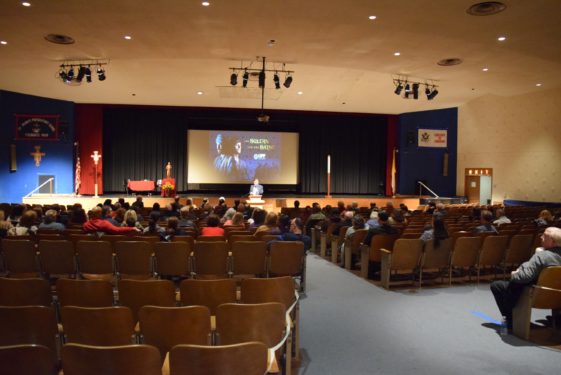 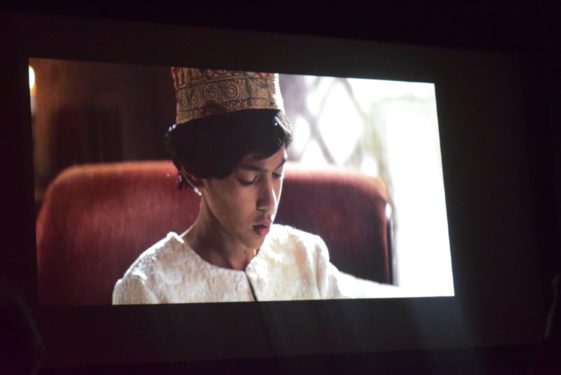 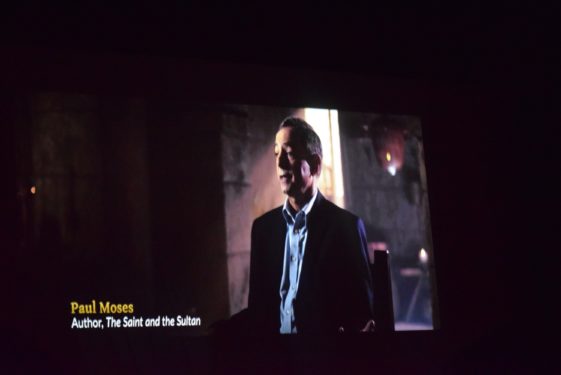 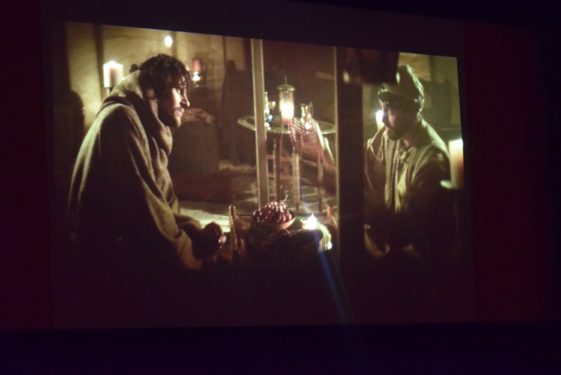 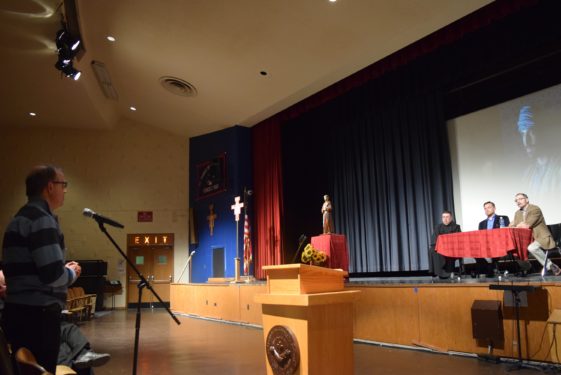 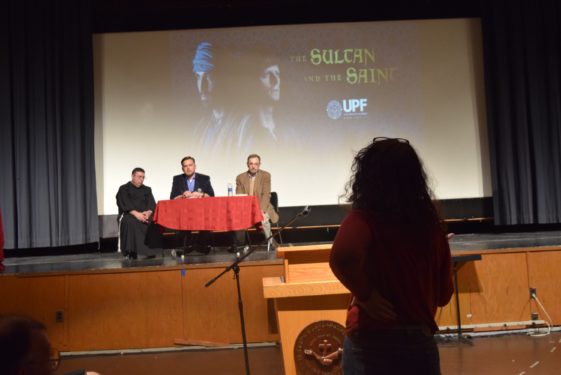 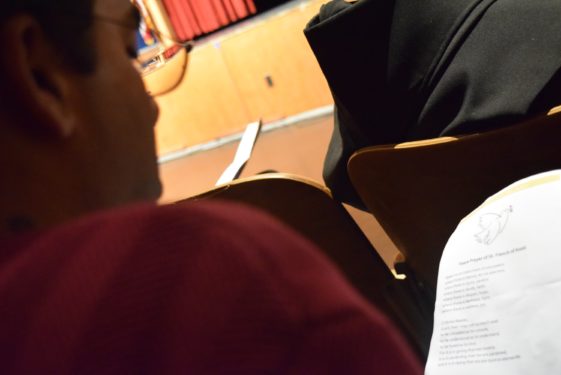 Sitting quietly in the front row of the auditorium with her mother, Parisa Boukani stood out from the crowd as her deep blue silk hijab, or Muslim headscarf, fell gracefully across her cream-colored blouse.

A member of the Franciscan Brothers of Brooklyn dressed in his black habit, called the senior from St. Francis Prep, Fresh Meadows, to the front of the stage during a special screening of the film “The Sultan and the Saint.” It depicts the power of unified prayer and peacemaking through the eyes of St. Francis of Assisi and Sultan Malik-al Kamil during the East-West conflict known as the Crusades.

“I want them to take this misperception of Muslim and Christians and Jews, that they’re hating on each other, they’re at war with each other and I want them to know that we’re actually very friendly with each other,” said Boukani. “I do actually have Jewish friends. I do actually have Christian friends, Buddha friends, Hindu friends, like it’s not like ‘oh we’re just in one group.’ No, we’re open to everyone and if you have any questions at all, don’t be afraid to ask. I would rather them ask me personally than search it up on the internet and get the wrong answer for it.”

“We’re here tonight because we believe in many of the same things,” said St. Francis Prep Assistant Principal Joseph Castellano. “Treating all humans with dignity and respect, having compassion for all of God’s creation. We are here to recommit ourselves to working for peace and justice.”

Monica Duffy came from Flushing to attend the evening screening.

“I thought the movie was amazing,” she said. “I think there definitely needs to be more awareness brought to the youth about what is going on in the world, there definitely needs to be more of an integration of populations of people to understand each other. And I think if you appeal to the youth of today, and get them aware and have them begin a certain movement, there’s hope.”

As a public school educator, Duffy was immersed in the Muslim population, even on a more personal scale as a paraprofessional educator to an Indian student.

“I see how everyone is trying to have a better life and everyone is truly American who is here,” she added. “We should really be united and it’s unfortunate that a small sector of the population is at war and we really have to find some common ground and make the world a better place.”

The high school was able to show the film because of a special ongoing collaboration between the film production company, Unity Productions Foundation, and the Franciscan Action Network. The March 30 screening was one of more than 50 premieres taking place nationwide.

Foreshadowing the film’s storyline and key takeaway of constructive dialogue, the night began with an opening greeting by Boukani and Brother James McVeigh O.S.F., who together spoke in Arabic and English.

It was followed with Boukani explaining the greeting’s historical roots that mean “Peace be among you.” She explained how the founder of Islam, Prophet Muhammad, would use that greeting with his followers to remind Muslims of their religious bonds to each other as friends, not strangers.

The film took more than two years to complete and incorporated more than a dozen English and Arabic sources, translations and analyses from academic scholars to fully represent Christian and Muslim traditions. It also relied on the book “The Saint and the Sultan: The Crusades, Islam and Francis of Assisi’s Mission of Peace” by Brooklynite Paul Moses, a journalism professor at Brooklyn College, who also was in attendance.

“Unfortunately the stories of tensions between Christians and Muslims just doesn’t go away,” said Moses. “So even though the book came out in 2009, it kind of keeps popping up. (Virginia) Senator Tim Kaine was quoted in a couple accounts saying he was reading it during the presidential race. Then you have this new interest because of the documentary. So it’s a funny thing even though the book has been out for a while now, it’s just a story that remains relevant.”

To properly write about the historical elements of his novel, Moses spent a lot of time researching the different personalities of the leaders of the Church during the Middle Ages, the bloody battles in key cities of the Crusades, but he credited the film for capturing his work and successfully putting it onto the big screen.

After the viewing, questions were asked by the audience to a panel consisting of Moses, Franciscan Brother Damian Novello, O.S.F, as well as the film’s producer Daniel Tutt.

The evening closed with the words of St. Francis: “Make me an instrument of your peace, where there is hatred, let me sow love.”

One thought on “St. Francis Prep Offers Saint, Sultan As Channels of Peace”