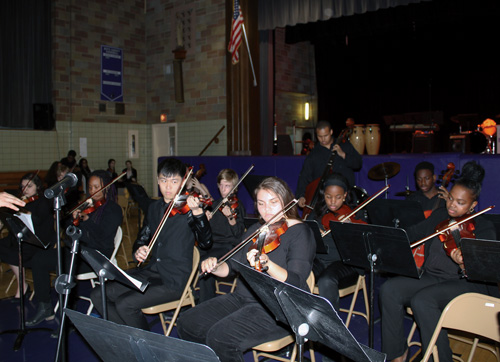 Musical pieces played included Beethoven’s “Ode to Joy” and Gerardo Matos Rodriguez’s “La Cumparsita.” Among the musicians was senior Sergeene Absalon, who will graduate on June 11.

The concerts this year also showcased the school’s Big Band, Symphonic Orchestra and the Latin Jazz Ensemble. Nineteen seniors were part of the band who delighted the audience with their performance. The audience danced to popular songs such as “Dancing in the Streets,” “Respect” and “Fly Me to the Moon.”

The concert ended to the sounds of thunderous applause and a standing ovation.

This year, the students have been busy performing concerts, which included a performance at El Caribe Country Club during the school’s Emmaus Society gala dinner.

The school’s band also played at the 43rd Annual International Food Festival in NYC on Sunday May 15th. Under the direction of Joseph Gucciardi, music teacher and band director.