Among those outside of the official diocesan delegation were young people from SS. Peter and Paul parish, Williamsburg, who joined nearly 300 other pilgrims from the U.S. on a month-long pilgrimage to Portugal, France and Spain. 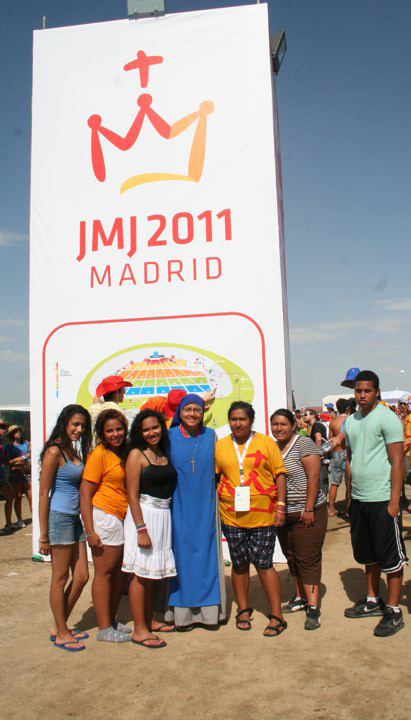 The Servants of the Lord and the Virgin Matara Sisters accompanied them.  They logged many miles, stayed in convents, often slept on the floor, ate a lot of bread and were at times faced with the lack of bathing water.

They said this is the first time most of them travelled without their parents.

“When you are away for a month you miss your family,” said Yoana Castro.  “When I get to New York I am going to hug my mom and eat a lot of food with no bread.”

Despite being homesick, Castro said she learned that she is capable of more than she thought

“It showed us that we could be independent,” she said. “I learned to have faith in myself and God because without that, there is nothing.”

Edilberto Concepcion said sharing limited space with the same people was difficult but worthwhile.  The circumstances created tension between the pilgrims, but the spiritual aspect gave him the strength to react appropriately, he said.

“Instead of punching something, I could say three Hail Marys,” he said.

Sister Mary Our Lady of Peace, S.S.V.M, said she saw strength in the pilgrims through their struggles.

“Instead of complaining about those things, the kids gave them up as an offering to Christ,” she said.

“I learned that God is truly in control and that I must place my complete trust in him,” she said. “He is planting seeds in the hearts of these youth. For in his time ‘He makes all things new.’”