At St. John’s University, a March for Life scarf sparked a relationship and a conversion to Catholicism.

Derrell Bouknight, who graduated from St. John’s on May 19, attended a Super Bowl party his freshman year at St. John’s. He wore the scarf, which attracted the attention of Margaret Moore, his future girlfriend.

After the party, the two eventually became close friends and attended Mass together. It was during one of the student Masses where an announcement about RCIA classes was made. Bouknight remembered the exact moment.

Bouknight, a journalism major, did explore becoming a Catholic, and his conversion to the faith stands out as his most memorable experience at St. John’s. He is not the rule when it comes to faith and college students, even at Catholic colleges. One study showed that students at Catholic universities only occasionally pray or attended Mass.

For Bouknight, graduation weekend was particularly special because of his conversion. The day before St. John’s commencement ceremony, Bouknight was a guest speaker at the St John’s baccalaureate Mass.

“I came to St. John’s not only seeking an education, but also in search of my own path – a more definitive answer to the ‘why’ that lingered within me,” Bouknight told the guests. “My calling, my why – came right here in this church.”

He was referring to St. Thomas More Church, and the time he recalled was from 2016 to 2017 during his Rite of Christian Initiation of Adults (RCIA) classes on campus.

“I joined RCIA, the rite of Christian initiation of adults from September through April in this church and it became my home,” Bouknight, a native of Washington, D.C., said.

Two years earlier, he sat in the pews at St. Thomas More as a Protestant – inquisitive and curious about what was tugging at his heart.

Bouknight grew up as a Baptist, but he was immersed in Catholic outreach programs when he was a student at Gonzaga College H.S. – an all-boys Jesuit high school in Washington.

A Call To Serve

“A little over five years ago in January of 2014, I attended a retreat in high school entitled ‘Kairos,’” he said. “Kairos is a word adapted in Greek to mean God’s time. See I didn’t grow up Catholic. I wasn’t born into the Catholic faith nor did I celebrate its beliefs or its practices. Yet as I sat in front of the Potomac River at this retreat, with the sun setting before me in the horizon, in the reflection and in my prayer, I felt a calling, a tug in my heart asking why.”

Bouknight said his high school freshman retreat at Gonzaga was a chance for him to learn not only about his classmates, but also about himself.

“That really began my involvement with campus ministry because we had retreat leaders,” he said.

“It felt natural and it was something that I enjoyed doing. I enjoyed going to the campus ministry office and talking to the people who worked there and hearing their ideas and sharing my ideas on how we can implement certain aspects of the faith into the retreat.

“Even though I wasn’t Catholic, it still felt like I was contributing a great amount into everything that was going on. I was learning at the same time too and that began the expansion process of everything.”

Bouknight’s attraction to the Catholic faith began even earlier, when he was in elementary school. He attended St. Gabriel’s School in Washington and then was recommended to attend Gonzaga.

“I loved it,” he said. “My mom loved it. My dad loved it. I went on a visit, and I learned everything about the school itself and its history and the people there and from there in terms of my faith, and spirituality.”

He said religion class at Gonzaga was his favorite because he learned so many new things that challenged him.

Faith For Every Day

When it was time to apply for colleges, Bouknight was interested in Catholic universities, and St. John’s and its Vincentian spirit that piqued his curiosity.

“The Jesuit order, our motto and something we carried out was being a man for others. Here it’s similar, the components of service and helping others and being zealous and being a light for the world is something that people here take pride in. The component and aspects of both being Jesuit and Vincentian are similar, but different,” he said. 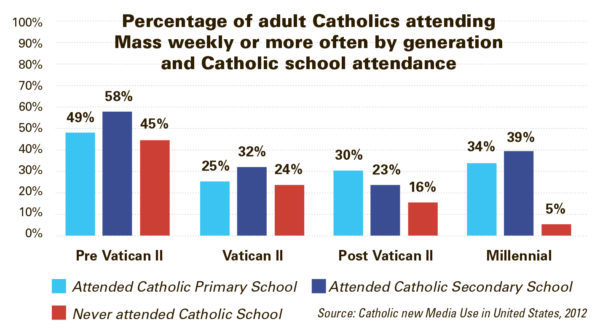 Bouknight regularly attended Mass on campus as a non-Catholic, a routine going back to his high school day. A 2012 poll by Catholic New Media Use in the United States indicates Catholic high school graduates go to Mass more frequently, although nowadays fewer millennials attend either a Catholic high school or Mass every week.

That’s not the case for Bouknight, or for Moore, his girlfriend, who was born and raised Catholic, but wasn’t super religious growing up.But at St. John’s, Moore started getting more Catholic friends and becoming more familiar with her faith.

She decided to her faith more seriously and make a bigger part of her life, including her dating life.

She recalled what she told Bouknight during that time when they were first considered dating. When he was going through RCIA classes, the two were part of a group that decided to consecrate their lives to Mary and devote their lives to Jesus through the Blessed Mother.

“From now on I’m going to make religion a part of my life and I’m not telling you that you have to,” Moore said.

That April (2017), Auxiliary Bishop Octavio Cisneros celebrated the Easter sacraments of initiation at St. Thomas Moore, where Bouknight received his first communion and confirmation. His sponsor, Moore, was beside him. Since then, he said his faith journey has continued. Together, the two volunteered during a pilgrimage to Lourdes, France.

Now, they said, they’re looking forward toward the vocation of marriage at a similar pace – one step, one day and one prayer at time – a familiar formula for two students who through each other continue to discover more about their faith.